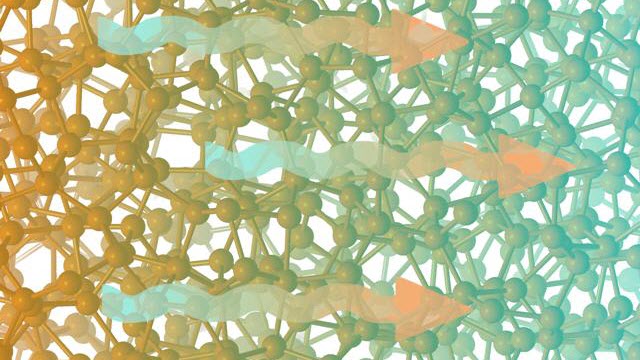 Theoretical physicists from the Scuola Internazionale Superiore di Studi Avanzati (SISSA) and the University of California at Davis lay brand new foundations to such a fundamental process as heat transport in materials, which finally allow crystals, polycrystalline solids, alloys, and glasses to be treated on the same solid footing. This feat opens the way to the numerical simulation of the thermal properties of a vast class of materials that, while being key in important technologies such as energy saving, conversion, scavenging, and storage, or heat dissipation or shielding, and even in the planetary sciences, have thus far dodged a proper computational treatment. The research has been published in Nature Communications.

Heat flows from the warm to the cool as time flows from the past to the future. In a sense, heat flow is the defining feature of the arrow of time. In spite of the foundational importance of heat transport, the father of its modern theory, Sir Rudolph Peierls, wrote in 1961: "It seems there is no problem in modern physics for which there are on record as many false starts, and as many theories which overlook some essential feature, as in the problem of the thermal conductivity of nonconducting crystals." Half a century has passed since and still now heat transport is one of the most elusive chapters of theoretical materials science. As a matter of fact, no unified approach existed so far to treat crystals and (partially) disordered solids on a equal footing, thus tampering with the efforts of generations of materials scientists to simulate different materials, or different states of a same material, occurring in a same physical system or device with the same accuracy.

This major gap has been finally closed by a group of researchers from SISSA and UC Davis, led by Stefano Baroni and Davide Donadio in the framework of the MAX EU Centre for Supercomputing Applications, who have developed a new methodology, based on the Green-Kubo theory of linear response and concepts from lattice dynamics, that nicely bridges different approaches applying to crystals and glasses. The new methodology naturally accounts for quantum mechanical effects, thus finally enabling the predictive modeling of heat transport in complex disordered materials also in the low-temperature quantum regime, to which none of the techniques thus available would apply.

This feat will thus empower scientists and engineers to understand and design heat transport for a broad variety of applications. Achieving extremely low thermal conductivity is essential for thermoelectric energy harvesting and solid-state cooling, thermal insulation, and thermal barrier coating, while high thermal conductivity is key for heat management in high-power electronics, batteries, and photovoltaics. All the materials utilized in these applications are nanostructured, polycrystalline, highly defective, or even glassy: finally they can be studied with high accuracy, within a unified and practicable framework.