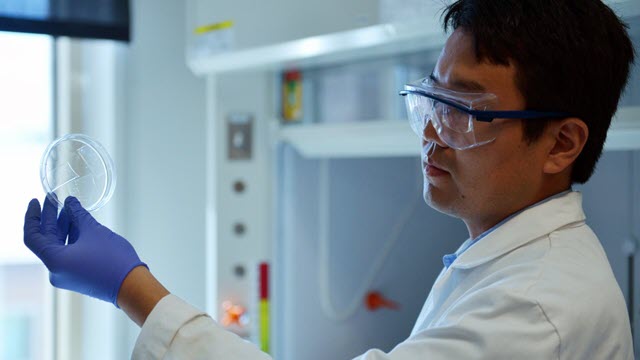 Qingkun Liu, a postdoctoral research associate at CU Boulder, holds up samples of a new gel that could improve the energy efficiency of windows across the United StatesCREDIT: CU Boulder

A new, super-insulating gel developed by researchers at CU Boulder could dramatically increase the energy efficiency of skyscrapers and other buildings, and might one day help scientists build greenhouse-like habitats for colonists on Mars.

The "aerogel," which looks like a flattened plastic contact lens, is so resistant to heat that you could put a strip of it on your hand and a fire on top without feeling a thing. But unlike similar products on the market, the material is mostly see-through.

"Transparency is an enabling feature because you can use this gel in windows, and you could use it in extraterrestrial habitats," said Ivan Smalyukh, a professor in the Department of Physics. "You could harvest sunlight through that thermally-insulating material and store the energy inside, protecting yourself from those big oscillations in temperature that you have on Mars or on the moon."

The group's gel is also cheaper to produce because it comes from humble beginnings: beer waste.

Aerogels are at least 90 percent gas by weight, Smalyukh explained, but their defining feature is air. Their thin films are made up of crisscrossing patterns of solid material that trap air inside billions of tiny pores, similar to the bubbles in bubble wrap. It's that trapping capacity that makes them such good insulators.

"You create a very tortuous network of these nanoparticles that link together in the aerogel, preventing the heat from going through," Smalyukh said.

Most currently available aerogels, however, are opaque—a big problem if you want to use them to coat windows.

To make a different type of gel, Smalyukh and his colleagues begin with the common plant sugar cellulose. By carefully controlling how cellulose molecules link up, the team is able to orient them into a lattice-like pattern. That pattern is so uniform, he said, that it allows light to pass through unbothered, giving the gel its transparent appearance.

Researchers can make cellulose by adding specialized bacteria to a wide range of food waste. The team has been driving to breweries across the Boulder area to collect tubs of beer wort, or the waste liquid produced during the brewing process.

"So not only are we recycling and saving this valuable material from entering the landfill, but we're also producing this raw material cheaply," said Andrew Hess, a PhD student in physics at CU Boulder.

The final product of the team's efforts is a thin, flexible film that is roughly 100 times lighter than glass.

"We're envisioning a retrofitting product that would basically be a peel-and-stick film that a consumer would buy at Home Depot," Hess said.

Smalyukh and his colleagues have been exploring partnerships with window manufacturing companies and earlier this summer, their project was named one of the winners of NASA's 2018 iTech competition. This national contest seeks out Earth-bound technologies that might one day help people travel to space.

"Our approach so far has been around windows," Hess said. "However, we also see our technology being enabling for so many other applications, including smart clothes, for insulating cars and protecting firefighters."