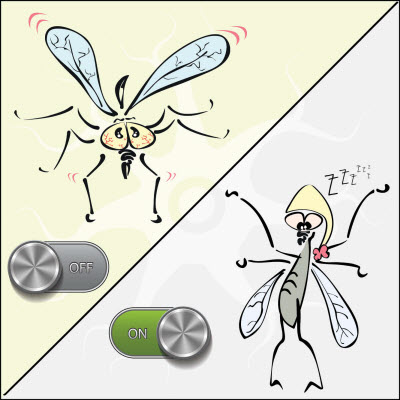 When the sleep-drive neurons turn on, it puts the fruit flies to sleep. And when the sleep drive neurons are turned off in well-rested flies, the flies awaken.Illustration credit: Credit: Johns Hopkins MedicineStudying fruit flies, whose sleep is remarkably similar to that in people, Johns Hopkins researchers say they’ve identified brain cells that are responsible for why delaying bedtime creates chronic sleepiness.

In a report on the research published online on May 19 in Cell, the scientists say they found a group of brain cells in charge of so-called sleep drive that becomes more active the longer flies are kept awake. The same mechanism, they say, also plays a role in putting the flies to sleep and keeping them that way.

The findings may offer insight into human sleep disorders and open up new strategies to promote long-lasting sleep for those with chronic insomnia who don’t respond to available sleep drugs, they say.

“Although fruit flies look very different from people on the surface, they actually share many of the same genes and even behaviors,” says Mark Wu, MD, PhD, associate professor of neurology at the Johns Hopkins University School of Medicine. “And with what we believe is the first identification a mechanism behind the adjustable nature of sleep drive, researchers can look for the same processes in mammals, including, one day, in humans.”

In their search for sleep-regulating cells, Wu’s team used genetic engineering to turn on small numbers of neurons in more than 500 fruit fly strains. They then measured how these flies slept when these neurons “fired.” Several strains continued to sleep for several hours even after they turned off the neurons, stopping them from firing and suggesting that the researchers triggered sleep drive in these flies, which led to the persistent sleepiness.

Using fluorescent microscopy, the scientists then examined the fly brains to specifically pinpoint the identity and location of the sleep drive-inducing cells. The firing neurons were genetically engineered to glow green. They were found in a structure called the ellipsoid body and are known as the R2 neurons.

To pin down more of what was going on, the researchers blocked the neurons from firing by genetically engineering the R2 neurons to make tetanus toxin, which silences the cells. The flies with the silenced R2 neurons slept on their normal schedule, but when the flies with the silenced R2 neurons were deprived of sleep during the night by mechanically shaking their vial houses, they got about 66 percent less “rebound sleep” compared to control flies, suggesting that they felt less sleepy after sleep deprivation.

Next, the researchers tested how fly R2 neurons behaved on their own in awake, sleeping or sleep-deprived fruit flies. They used tiny electrodes to measure the firing of the R2 neurons in well-rested, awake fruit flies; in fruit flies that were an hour into their sleep cycle; and in fruit flies after 12 hours of sleep deprivation.

“These R2 neurons have higher firing rates the more sleep-deprived the fruit flies were and firing of these neurons puts flies to sleep, suggesting that we’ve identified the key cells responsible for sleep drive,” says Wu.

Wu says it’s long been thought that getting to sleep requires an increase in sleep-promoting chemicals in specific parts of the brain as night and bedtime approach in the normal 24-hour sleep-wake cycle.  However, he says, these chemicals last for only a few minutes at a time, so it has been puzzling how they can account for sleep drive that lasts hours.

Related Article: The Effect of the Full Moon on Sleep

As an answer to this question, Wu and colleagues used a genetic technique to light up the places on the surface of the R2 neurons where they actively release small chemical neurotransmitters, sending information to neighboring cells. Compared to well-rested flies, sleep-deprived flies had an increase in the number and size of the places releasing the neurotransmitter, and they appeared much brighter. Wu says these changes in number of neurotransmitter release sites account for how the neurons are able to adjust over time using a system for sleep drive that works over a period of hours, rather than minutes, like the known sleep-promoting chemicals. This flexible system can adjust to times when the flies are sleep-deprived or when they are just nearing their normal bedtime. He adds that the sleep drive process in the R2 neurons works similarly to how memories are encoded in other types of neurons, where changes in the neuron’s information-sending and receiving parts adjust over time.

“Figuring out how sleep drive works should help us one day figure out how to treat people who have an overactive sleep drive that causes them to be sleepy all the time and resistant to current therapies,” Wu says.

The research was funded by grants from the National Institute of Neurological Disorders and Stroke (R01 NS079584 and R21 NS088521) and a Burroughs-Wellcome Fund Career Award for Medical Scientists.