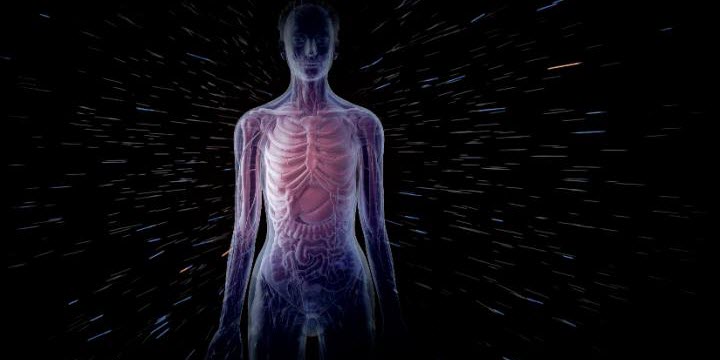 In space, astronauts are constantly bombarded by galactic cosmic radiation, comprised of a mixture of highly energetic ions, putting them at increased risk of radiogenic cancers, cardiovascular disease, and potential central nervous system decrements. Proportionally, the numerous white and blue tracks are representative of proton and helium ion strikes while the thicker colored tracks are representative of heavier ions such as oxygen, carbon, and iron nuclei which impart greater damage to cells, tissues, and organs per track.
Image courtesy of NASA

To better understand and mitigate the health risks faced by astronauts from exposure to space radiation, we ideally need to be able to test the effects of galactic cosmic rays (GCRs) here on Earth under laboratory conditions. An article publishing on May 19, 2020 in the open access journal PLOS Biology from Lisa Simonsen and colleagues at the NASA Langley Research Center, US, describes how NASA has developed a ground-based GCR Simulator at the NASA Space Radiation Laboratory (NSRL), located at Brookhaven National Laboratory.

Galactic cosmic rays comprise a mixture of highly energetic protons, helium ions, and higher charge and energy ions ranging from lithium to iron, and they are extremely difficult to shield against. These ions interact with spacecraft materials and human tissues to create a complex mixed field of primary and secondary particles.

The biological effects from these heavy ions and mixtures of ions are poorly understood. Using recently developed fast beam switching and controls systems technology, NSRL demonstrated the ability to rapidly and repeatedly switch between multiple ion-energy beam combinations within a short period of time, while accurately controlling the extremely small daily doses delivered by the heavier ions.

The authors describe how the simulator was developed, with a view to balancing the definition of mission-relevant radiation environments, facility limitations and beam selection, required hardware and software upgrades, as well as animal care and handling constraints.

In June of 2018, 33 unique ion-energy beam combinations were delivered in rapid sequential order (under 75 minutes), cumulatively mimicking the GCR environment experienced by shielded astronauts on a deep space mission. The following October, acute and highly fractionated GCR simulation doses were delivered to three animal model systems over four weeks to investigate mixed-field quality and dose-rate effects on the risks of radiogenic cancers, cardiovascular disease, and adverse effects on the central nervous system.

Over the past 30 years, most research on understanding space radiation-induced health risks has been performed using acute exposures of mono-energetic single-ion beams. Now a mixed field of ions can be studied collectively in the same animal cohort, thereby drastically reducing the number of animals, husbandry, and research costs. This achievement marks a significant step forward and enables a new era of radiobiology research to accelerate our understanding and mitigation of health risks faced by astronauts during long duration exploration missions or interplanetary travel to Mars.