May 23, 2019National Institute of Standards and Technology 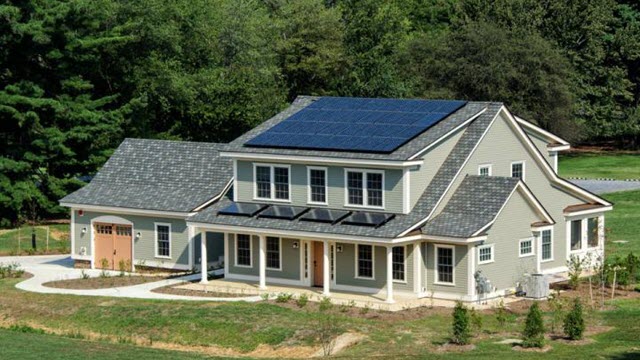 If you want to make your home as energy-efficient and green as possible, should you use gas or electric for your heating and cooling needs? Gas is the more eco-friendly option—for now—for an energy-efficient home in Maryland. That's the conclusion of a new economic study by the National Institute of Standards and Technology (NIST), which evaluated the power usage and environmental impact of gas versus electric heating, ventilation, and air conditioning (HVAC) systems in low-energy residential dwellings. The NIST work provides a research method that others can use to perform their own analysis on which technology is more favorable for their local areas.

"Fuel type is an important factor because heating and cooling accounts for a significant amount of home energy consumption," said NIST civil engineer David Webb, one of the authors of the new study, published in the Journal of Building Engineering. "However, little research has been conducted looking at the impact of which fuel source is used, gas or electric, on achieving low-energy and low-impact goals. We used a unique NIST tool set of databases and software known as BIRDS [Building Industry Reporting and Design for Sustainability] to assess and measure that impact scientifically, and then provide a research method for others to do the same for any climate region in the United States."

Since its debut in 2014, building professionals have used BIRDS to evaluate and measure the sustainability of both the materials and energy used by a building throughout its lifetime. Using computer models derived from BIRDS data, architects, structural engineers, construction managers and other homebuilding stakeholders can make science-based, cost-effective decisions on how to create and maintain high-performance, green, and low- or net-zero energy residences.

The new gas-versus-electric fuel source study uses data found in one of the three databases making up the latest version of BIRDS (v4.0), measurements that were obtained from ongoing research at NIST's Net-Zero Energy Residential Test Facility (NZERTF).

Built as a prototypical two-story, four-bedroom suburban home on NIST's campus in Gaithersburg, Maryland, the NZERTF is actually a laboratory where NIST researchers and industry partners design, test and evaluate the materials, technologies and strategies that will yield a home that produces at least as much energy as it consumes over the course of a year.

To conduct their study, Webb and his colleagues had to create, via computer modeling, a home based on the NIST net-zero concept with an electric HVAC system and a virtual twin that instead used natural-gas-fired space and water heating equipment. "This allowed us to make a true apples-to-apples comparison of gas versus electric for their respective energy, environmental and economic impacts," said Joshua Kneifel, a NIST economist and coauthor of the study.

The researchers compared the two simulated homes as if they were built to current Maryland codes and standards for low energy use, incorporated existing technology and equipment, and were in the same climate zone as the actual NZERTF. Running the models, the software considered 960,000 building design combinations and eight different economic scenarios to estimate performance over a period of up to 30 years.

Under those criteria, the study results suggest that a natural gas HVAC system is currently more economical overall than an electric one for a code-compliant Maryland home. Although net-zero energy performance was achieved at the lowest cost using electric heating, it came with higher environmental impacts due to the emissions generated during its production.

"The overall economic benefit of natural gas was expected because, at this time, it is the cheaper fuel source in Maryland, costs less in dollars and energy expended to produce and transport, and carries a lower construction price for installation of an HVAC system which uses it," Webb explained.

However, Kneifel said that electric may yet become the better bargain and more eco-friendly option.

"For example, as more power companies move to cleaner forms of electric generation, such as natural gas instead of coal, the environmental impact will lessen," he explained. "Also, technology changes, such as cheaper and more efficient solar energy and HVAC systems, should help make the use of electricity more cost-effective."

The NIST team members acknowledge that their sustainability study was limited in terms of the equipment type, occupant energy demand and location. They urge other organizations to continue and expand their research to consider several key variables. These include the use of alternative equipment such as ground-source heat exchangers and high-velocity HVAC systems, cost and performance in a variety of climates, and differences in building operation that can affect energy consumption rates. Most importantly, they said that future studies must account for improvements in technology, construction materials and methods, and energy production and transmission.