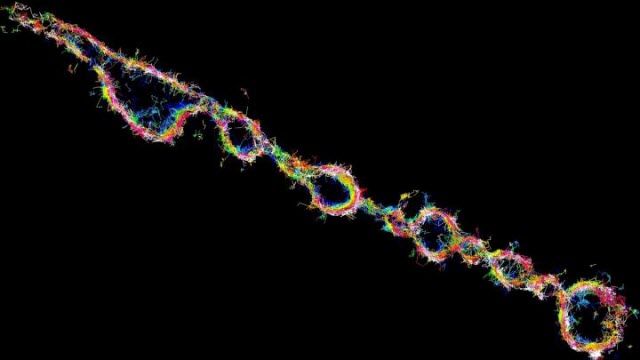 A representation of thousands of tracked syntaxin1A molecules in a neuron exposed to propofol.Image credit: Bruno van Swinderen

A new understanding of the complex ways in which general anesthetics act on the brain could eventually lead to improved drugs for surgery. It remains unclear how general anesthesia works, even though it is one of the most common medical procedures worldwide.

University of Queensland researcher and associate professor Bruno van Swinderen said his team had overturned previous understanding of what general anesthetics do to the brain, finding the drugs did much more than induce sleep.

"We looked at the effects of propofol—one of the most common general anesthetic drugs used during surgery—on synaptic release," the UQ Queensland Brain Institute scientist said.

Synaptic release is the mechanism by which neurons—or nerve cells—communicate with each other.

"We know from previous research that general anesthetics including propofol act on sleep systems in the brain, much like a sleeping pill," van Swinderen said.

"But our study found that propofol also disrupts presynaptic mechanisms, probably affecting communication between neurons across the entire brain in a systematic way that differs from just being asleep. In this way it is very different than a sleeping pill."

"We found that propofol restricts the movement of a key protein (syntaxin1A) required at the synapses of all neurons. This restriction leads to decreased communication between neurons in the brain," he said.

Van Swinderen said the finding contributed to understanding how general anesthetics worked, and could explain why people experienced grogginess and disorientation after coming out of surgery.

"We think that widespread disruption to synaptic connectivity—the brain's communication pathways—is what makes surgery possible, although effective anaesthetics such as propofol do put you to sleep first," he said.

"The discovery has implications for people whose brain connectivity is vulnerable, for example in children whose brains are still developing or for people with Alzheimer's or Parkinson's disease.

"It has never been understood why general anesthesia is sometimes problematic for the very young and the old. This newly discovered mechanism may be a reason."

Associate Professor van Swinderen said more research was needed to determine if general anesthetics had any lasting effects in these vulnerable groups of people.

"Studying these effects in model systems such as rats and flies allows us to address these questions by manipulating the likely mechanisms involved, which we can't do in humans."

The research involved Frederic Meunier's laboratory at QBI, where super-resolution microscopy techniques enabled the researchers to understand how the anaesthetic worked on single cells. Dr Victor Anggono, whose laboratory at QBI focusses on synaptic mechanisms, was a partner in the study.