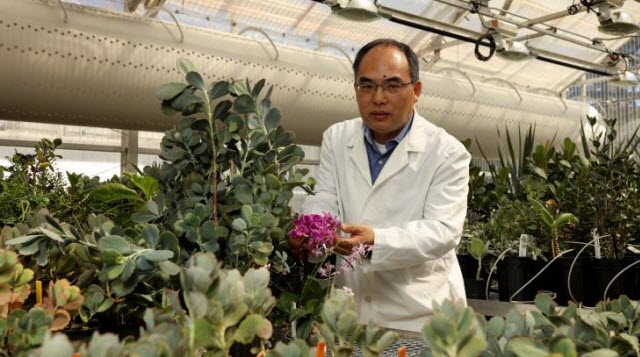 OAK RIDGE, Tenn., Dec.1, 2017 — Scientists at the Department of Energy’s Oak Ridge National Laboratory have identified a common set of genes that enable different drought-resistant plants to survive in semi-arid conditions, which could play a significant role in bioengineering and creating energy crops that are tolerant to water deficits.

Plants thrive in drylands by keeping their stomata, or pores, shut during the day to conserve water and open at night to collect carbon dioxide. This form of photosynthesis, known as crassulacean acid metabolism or CAM, has evolved over millions of years, building water-saving characteristics in plants such as Kalanchoë, orchid, and pineapple.

“CAM is a proven mechanism for increasing water-use efficiency in plants,” ORNL coauthor Xiaohan Yang said. “As we reveal the building blocks that make up CAM photosynthesis, we will be able to bioengineer the metabolic processes of water-heavy crops such as rice, wheat, soybeans, and poplar to accelerate their adaptation to water-limited environments.”

Scientists are studying a variety of drought-resistant plants to unlock the mystery of CAM photosynthesis. For this work, the ORNL-led team sequenced the genome of Kalanchoë fedtschenkoi, an emerging model for CAM genomics research because of its relatively small genome and amenability to genetic modification.

“It is widely accepted that some unrelated plants exhibit similar characteristics under similar environmental conditions, a process known as convergent evolution,” Yang said.

They identified 60 genes that exhibited convergent evolution in CAM species, including convergent daytime and nighttime gene expression changes in 54 genes, as well as protein sequence convergence in six genes. In particular, the team discovered a novel variant of phosphoenolpyruvate carboxylase, or PEPC. PEPC is an important “worker” enzyme responsible for the nighttime fixation of carbon dioxide into malic acid. Malic acid is then converted back to carbon dioxide for photosynthesis during the day.

“These convergent changes in gene expression and protein sequences could be introduced into plants that rely on traditional photosynthesis, accelerating their evolution to become more water-use efficient,” said Yang. The team published their findings in Nature Communications.

Crop production is the world’s largest consumer of freshwater. Availability of clean water resources is shrinking because of urbanization, human population growth, and changes in climate, which presents a challenge to optimal growing environments.

To address this concern, engineering CAM photosynthesis into food and energy crops could reduce agricultural water use and boost crops’ resilience when the water supply is less than desirable. 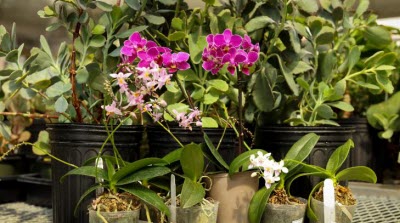 The team used ORNL’s Titan supercomputer to compare the genomes of Kalanchoë fedtschenkoi (back row) and Phalaenopsis equestris, or orchid (front row), as well as Ananas comosus, or pineapple.Photo Credit: Jason Richards/Oak Ridge National Laboratory, U.S. Dept. of Energy“Studying the genome of water-efficient plants may also provide insights into a plant’s ability to use slightly saline water and maintain growth under higher temperature and lower clean water availability,” said Jerry Tuskan, coauthor and chief executive officer of the Center for Bioenergy Innovation led by ORNL. “If we can identify the mechanisms for water-use efficiency, we could move this trait into agronomic plants, supply non-potable water as irrigation to those plants and save the clean water for drinking.”

The research was funded by DOE’s Office of Science (Biological and Environmental Research, Genomic Science Program) and ORNL’s Laboratory Directed Research and Development program. The work also used resources of the Compute and Data Environment for Science at ORNL, a fully integrated infrastructure offering scalable computing, software support and high-performance cloud storage services and the Oak Ridge Leadership Computing Facility, which is a DOE Office of Science User Facility.

ORNL is managed by UT-Battelle for DOE’s Office of Science. The Office of Science is the single largest supporter of basic research in the physical sciences in the United States, and is working to address some of the most pressing challenges of our time. For more information, please visit http://science.energy.gov/.