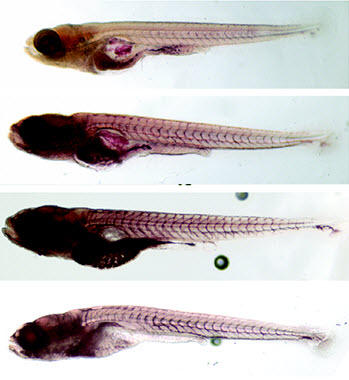 “Finding the molecular connections between a brain and a body phenotype is indeed really paradigm shifting,” says Whitehead Institute member Hazel Sive, who is also a professor of biology at MIT. “It lets us think about the common control of these two aspects of phenotype, which is very interesting and could be useful for developing therapies for these phenotypes.”

Both genes reside in the 16p11.2 region of human chromosome 16. About 1 in 2000, or around 4 million people worldwide, have deletions in this region, and these deletions are associated with multiple brain and body symptoms, including autism spectrum disorders, developmental delay, intellectual disability, seizures, and obesity.

Scientists have had difficulty teasing apart the relationship between specific traits and deletions in this region, because it includes at least 25 genes, and because there is not a one-to-one mapping of gene to phenotype. Instead, multiple genes seem to create a web of interactions that produce a variety of characteristics.

To solve such a complex puzzle, Jasmine McCammon, a postdoctoral researcher in Sive’s lab, enlisted the zebrafish as a “living test tube.”  The Sive group uses zebrafish to study the genetic/phenotype connections associated with human disorders. Like the human genome, the zebrafish genome has two copies of each gene, and scientists can remove the function of multiple genes to produce phenotypes that are reminiscent of human symptoms.

The results from McCammon’s initial screen with zebrafish indicate that two genes in the 16p11.2 region could be key for brain development: fam57ba and doc2a. (fam57b encodes a ‘ceramide synthase’ that makes a kind of lipid, and doc2a encodes a regulator of secretion.) McCammon investigated further by deleting one copy of fam57ba and doc2a individually; the effect was minimal. However, simultaneously removing a copy of both genes revealed significant synergy between them. Compared with controls, fish with only one copy of each gene exhibit hyperactivity, increased propensity for seizures, increased body and head size, and fat content. When both copies of only fam57ba are removed, the fish are much larger and with a higher fat content. All of the study’s results are published in the journal Human Molecular Genetics.

Although her findings use zebrafish and are far from the clinic, McCammon was struck by how much people affected by deletions in this genome identified with her results.

“When I spoke with the parents of some kids with neurodevelopmental disorders, I was surprised how much the brain/body connection that we described resonated with them,” she says. “They said that yes, their child has autism, but he also has really weak muscle tone. Or she has a gastrointestinal problem and that’s been more problematic than her behavior issues. For me, it’s been really revealing to talk to people who’ve actually experienced this as opposed to reading about statistics in journals.”

The mechanisms underlying this brain/body connection are still not well understood. One of the identified genes, fam57ba, provides some intriguing hints as to how metabolism and brain function could be intertwined, because it produces an enzyme that plays a role in lipid production and is believed to be a metabolic regulator.  The lipid type, ceramide, also has a functional role in various signaling pathways and affects synaptic function, although its primary role is not in the synapse, but providing structure in cell membranes.

For Sive, the two identified genes could be just the beginning. “Our data suggest that there may be metabolic genes involved in human neurodevelopmental disorders,” she says.  “This is a nascent field, that we’re very interested in going forward.”

This work was supported by Jim and Pat Poitras, Len and Ellen Polaner, and the Markell-Balkin-Weinberg Postdoctoral Fellowship.