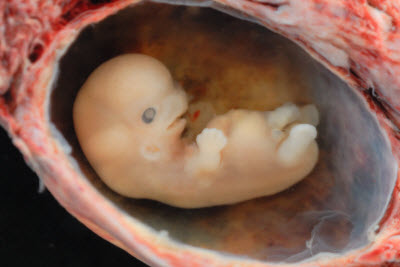 The Center for Genetics and Society recently stressed the need to put research involving modifying genes in viable human embryos on hold until a global discussion on the misuses of such research is complete.Image credit: lunar caustic, Wikimedia CommonsThe first application to pursue CRISPR/Cas9 genome-editing research in viable human embryos has been submitted to the UK’s fertility regulator by a team of researchers affiliated with the Francis Crick Institute in London.

“This research proposal is a troubling and provocative move,” commented Marcy Darnovsky, PhD, Executive Director of the Center for Genetics and Society. “Modifying the genes of human embryos is deeply controversial because it can be used for worthwhile research on the one hand, or to produce genetically modified human beings on the other. A global public conversation about preventing such misuses is just getting underway, and this proposal could short-circuit those deliberations.”

On September 14, the National Academies announced that the International Summit on Human Gene Editing scheduled for December will now be co-hosted by the Royal Society (UK) and the Chinese Academy of Sciences. Given that the National Academies has promised a comprehensive, inclusive, transparent, and indeed international debate of multinational, multidisciplinary perspectives, we are concerned that attempts by individual research teams to lunge forward with research in human embryos may limit the scope of discussion.

“It's illegal in the UK and dozens of other countries to use a modified embryo to initiate a pregnancy, but in others — notably the US — we don't have that legal protection,” Darnovsky added. “If scientists and the regulatory agency in the UK are serious about responsible use of powerful new gene altering technologies, they won't be rushing ahead in ways that could open the door to a world of genetically modified humans.”

If the UK Human Fertilisation & Embryology Authority were to issue this license, this would be the first approval of genome editing research on the human germline by a national regulatory body. The resulting experiments would be the second of their kind in this highly controversial area of research.

In April, scientists working out of China published research that they had created the first genetically modified human embryos—these embryos were nonviable, and the results of the CRISPR/Cas9 engineering were highly unsuccessful: producing off target mutations and mosaicism that underlined the limitations of our current understandings of genetics and genomics.

The response from the scientific community and the public after the first human embryo gene editing experiment in April was swift. Many scientists voiced support for either a pause or a moratorium on human germline modification.