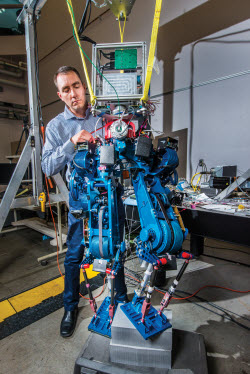 Steve Buerger is leading a Sandia National Laboratories project to demonstrate how energy efficient biped walking robots could become. Increased efficiency could enable bots to operate for much longer periods of time without recharging batteries, an important factor in emergency situations.Randy MontoyaThrough a project supported by the Defense Advanced Research Projects Agency (DARPA), Sandia is developing technology that will dramatically improve the endurance of legged robots, helping them operate for long periods while performing the types of locomotion most relevant to disaster response scenarios.

One of Sandia’s new robots that showcases this technology will be demonstrated at an exposition to be held in conjunction with the DARPA Robotics Challenge Finals next June.

As the finals draw closer, some of the most advanced robotics research and development organizations in the world are racing to develop emergency response robots that can complete a battery of tasks specified by DARPA. Competing robots will face degraded physical environments that simulate conditions likely to occur in a natural or man-made disaster. Many robots will walk on legs to allow them to negotiate challenging terrain.

Sandia’s robots won’t compete in the finals next June, but they could ultimately help the winning robots extend their battery life until their life-saving work is done.

Battery life is an important concern in the usefulness of robots for emergency response.

“You can have the biggest, baddest, toughest robot on the planet, but if its battery life is 10 or 20 minutes, as many are right now, that robot cannot possibly function in an emergency situation, when lives are at stake,” said Buerger.

The first robot Sandia is developing in support of the DARPA Challenge, is known as STEPPR for Sandia Transmission Efficient Prototype Promoting Research. It is a fully functional research platform that allows developers to try different joint-level mechanisms that function like elbows and knees to quantify how much energy is used.

“We take advantage of dynamic characteristics that are common to a wide variety of legged behaviors and add a set of ‘support elements,’ including springs and variable transmissions, that keep the motors operating at more efficient speed-torque conditions, reducing losses,” Buerger said.

Electric motors are particularly inefficient when providing large torques at low speeds, for example, to a crouching robot, Buerger said. A simple support element, such as a spring, would provide torque, reducing the load on the motor.

“The support elements also allow robots to self-adjust when they change behaviors. When they change from level walking to uphill walking, for example, they can make subtle adjustments to their joint dynamics to optimize efficiency under the new condition,” Buerger said.

Robots must adapt to the diverse kinds of conditions expected in emergency response scenarios.

“Certain legged robot designs are extremely efficient when walking on level ground, but function extremely inefficiently under other conditions or cannot walk over different types of terrains. Robots need an actuation system to enable efficient locomotion in many different conditions,” Buerger said. “That is what the adjustable support elements can do.”

Early testing has shown STEPPR to operate efficiently and quietly.

“Noise is lost energy, so being quiet goes hand-in-hand with being efficient. Most robots make a lot of noise, and that can be a major drawback for some applications,” Buerger said.

STEPPR’s and WANDERER’s electronics and low-level software are being developed by the Open Source Robotics Foundation. The designs will be publicly released, allowing engineers and designers all over the world to take advantage of advances.

The Florida Institute for Human and Machine Cognition is developing energy-efficient walking control algorithms for both robots. The Massachusetts Institute of Technology and Globe Motors also are contributing to the project.

Sandia’s robotic work will be demonstrated in the technology exposition section of the DARPA Robotics Challenge, scheduled for June 5-6 at Fairplex in Pomona, Calif.