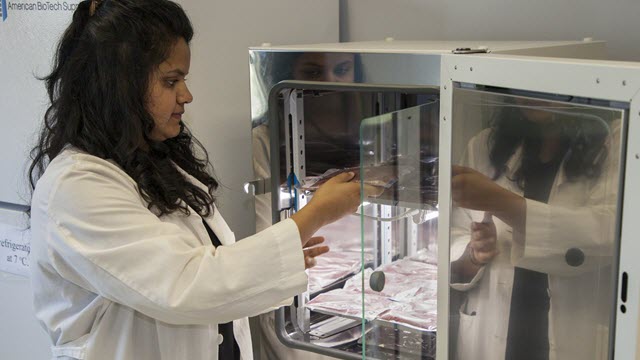 WSU graduate student Juhi Patel, an author on the mac and cheese paper, puts packages of purple potatoes into an incubator, which speeds up the food quality changes at a consistent rate.Credit: Washington State University

Washington State University scientists have developed a way to triple the shelf life of ready-to-eat macaroni and cheese, a development that could have benefits for everything from space travel to military use.

If human beings go to Mars, they need food. Food that won't spoil during the long travel between planets, and while they're on the surface.

Currently, plastic packaging can keep food safe at room temperature for up to twelve months. The WSU researchers demonstrated in a recent paper in the journal Food and Bioprocess Technology they could keep ready-to-eat macaroni and cheese safe and edible with selected nutrients for up to three years.

"We need a better barrier to keep oxygen away from the food and provide longer shelf-life similar to aluminum foil and plastic laminate pouches," said Shyam Sablani, who is leading the team working to create a better protective film. "We've always been thinking of developing a product that can go to Mars, but with technology that can also benefit consumers here on Earth."

In addition to having space travel in mind, the researchers are working closely with the US Army, who want to improve their "Meals Ready to Eat" (MREs) to stay tasty and healthy for three years.

In taste panels conducted by the Army, the mac and cheese, recently tested after three years of storage, was deemed just as good as the previous version that was stored for nine months.

The food itself is sterilized using a process called the microwave-assisted thermal sterilization (MATS) system, developed by WSU's Juming Tang. The food must be sterilized in plastic, since metal, like tin cans, can't be microwaved and glass is fragile and not a preferred choice of packaging for MREs. Glass is also too heavy for military or space uses.

Adding a metal oxide coating to a layer of the plastic film significantly increases the amount of time it takes for oxygen and other gases to break through.

The metal oxide coating technology has been around for almost 10 years, but it develops cracks when subjected to sterilization processes. That eventually compromises the food shelf-life, said Sablani, a professor in WSU's Department of Biological Systems Engineering. WSU researchers have been working with packaging companies to develop new films that keep oxygen and vapor out longer.

Related Article: How Does Your Garden Grow in Space?

The packaging films are made up of multiple layers of different plastics. These few-micron thin layers have different purposes, like being a good barrier, good for sealing, good mechanical strength, or good for printing, Sablani said.

"We are excited that an over-layer of organic coating on metal oxide helped protect against microscopic cracks," he said. "Multiple layers of metal oxide coating have also increased the barrier performance. Our research guided development of newer high barrier packaging."

To ensure the process works fully, the Army plans to do testing under field conditions. So these new MREs will be stored longer, then sent to deployed soldiers to eat in the field.

"If they like the taste of the packaged food there, then that's the ultimate test of new films," Sablani said.

The team doesn't wait the three years to test the results of each new film. Keeping the packaged food in a 100-degree Fahrenheit incubator rapidly speeds up the food quality changes at a consistent rate. Six months in the incubator is equivalent to three years at room temperature, while nine months is the equivalent to nearly five years, Sablani said.

For space travel, it's not really possible to field-test for a trip to Mars. But Sablani plans to reach out to NASA to talk about how to test the WSU films to make sure that packaged food stays edible on a space mission where failure isn't an option.

"NASA knows about our work, but we're just now getting to the point where we can talk to them with a proven product," Sablani said. "We hope to work out a way to test these products on the International Space Station in the future to show that the food is safe after long-term storage."

NASA will require storage of up to five years for food, so that's what the team is working on now. They are currently aging other recipes that will be taste tested once they reach the five year mark.

Several types of mission plans have been proposed for a trip to Mars. The five-year food storage includes some built-in safety requirements, Sablani said.

It may involve an approximately nine month travel time from Earth to Mars, about five hundred days on or orbiting Mars, and a travel time of about nine months to return to Earth. The extra storage time is necessary in case the mission is delayed and explorers must stay longer.