WASHINGTON, DC — Researchers have used advanced imaging approaches to achieve super-resolution microscopy at unprecedented speeds. The new method should make it possible to capture the details of processes occurring in living cells at speeds not previously possible. 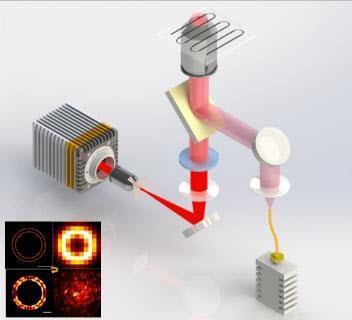 The researchers tested their new nanoscopy approach technique by using it to image a 60-nanometer ring (inset). The new nanoscopy approach could resolve the ring using just 10 image frames while traditional approaches needed up to 4000 frames to achieve the same result.Credit: Zhongyang Wang, Chinese Academy of Sciences

Super-resolution techniques, often called nanoscopy, achieve nano-scale resolution by overcoming the diffraction limit of light. Although nanoscopy can capture images of individual molecules inside cells, it is difficult to use with living cells because hundreds or thousands of imaging frames are needed to reconstruct an image—a process too slow to capture quickly changing dynamics.

In Optica, The Optical Society's (OSA) journal for high impact research, investigators from the Chinese Academy of Sciences describe how they used the unconventional imaging approach known as ghost imaging to enhance the imaging speed of nanoscopy. The combination produces nanometer resolution using orders of magnitude fewer imaging frames than traditional nanoscopy techniques.

"Our imaging method can potentially probe dynamics occurring on millisecond time-scales in subcellular structures with spatial resolution of tens of nanometers—the spatial and temporal resolution at which biological processes take place," said Zhongyang Wang, co-leader of the research team.

The new approach is based on stochastic optical reconstruction microscopy (STORM), which was one of three super-resolution techniques to be recognized with Nobel prizes in 2014. STORM, which is also sometimes called photoactivated localization microscopy (PALM), is a wide-field technique that uses fluorescent labels that switch between light-emitting (on) and dark (off) states. Acquiring hundreds or thousands of snapshots, each capturing the subset of fluorescent labels that are on at a given time, allows the location of each molecule to be determined and used to reconstruct a fluorescence image.

The researchers turned to ghost imaging to speed up the STORM imaging process. Ghost imaging forms an image by correlating a light pattern that interacts with the object with a reference pattern that does not. Individually, the light patterns don't carry any meaningful information about the object. The researchers also used compressive imaging, a computational approach that enables image reconstruction with fewer exposures because it uses an algorithm to fill in the missing information.

"While STORM requires a low density of fluorescent labels and many image frames, our approach can create a high-resolution image using very few frames and a high density of fluorophores," said co-leader of research team Shensheng Han. "It also doesn't need any complex illumination, which helps reduce photobleaching and phototoxicity that could harm dynamic biological processes and living cells." 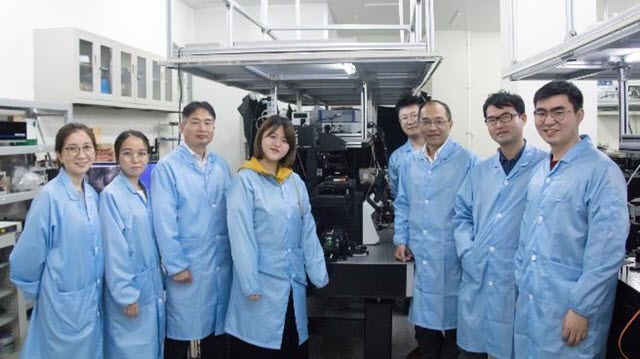 A team of researchers from the Chinese Academy of Sciences used ghost imaging to achieve nanoscopy with nanometer resolution using orders of magnitude fewer imaging frames than traditional nanoscopy techniques. This approach could be used to probe dynamics occurring on millisecond time-scales in subcellular structures with very high resolution.Credit: Zhongyang Wang, Chinese Academy of Sciences

To implement the new technique, the researchers used an optical component known as a random phase modulator to turn fluorescence from the sample into a random speckle pattern. Coding the fluorescence in this way allowed each pixel of a very fast CMOS camera to collect light intensity from the whole object in a single frame. To form the image via ghost imaging and compressive imaging, this light intensity was correlated with a reference light pattern in a single step. The result was more efficient image acquisition and a reduction in the number of frames required to form a high-resolution image.

The researchers tested the technique by using it to image a 60-nanometer ring. The new nanoscopy approach could resolve the ring using just 10 image frames while traditional STORM approaches needed up to 4000 frames to achieve the same result. The new approach also resolved a 40-nanometer ruler with 100 image frames.

"We hope this method can be applied to a variety of fluorescent samples, including those that exhibit weaker fluorescence than those used in this research," said Wang. The researchers also want to make the technique faster to achieve video-rate imaging with a large field of view and plan to use it to acquire 3D and color images.