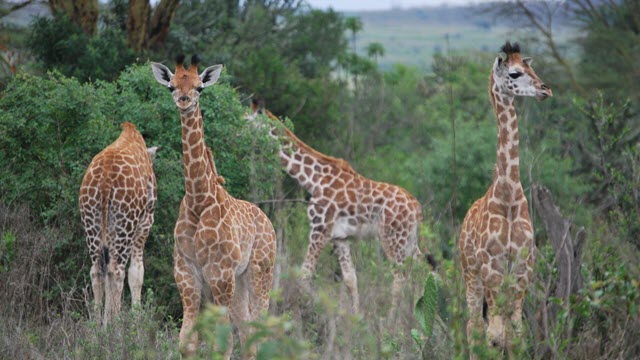 New research from the University of Bristol has highlighted how little we know about giraffe behavior and ecology.

It is commonly accepted that group sizes of animals increase when there is a risk of predation, since larger group sizes reduce the risk of individuals being killed, and there are "many eyes" to spot any potential predation risk.

Now, in the first study of its kind, Bristol PhD student Zoe Muller from the School of Biological Sciences has found that this is not true for giraffes, and that the size of giraffe groups is not influenced by the presence of predators.

"This is surprising, and highlights how little we know about even the most basic aspects of giraffe behavior," said Muller.

This study investigates how the grouping behavior of giraffes differed in response to numerous factors, such as predation risk, habitat type, and the characteristics of individuals.

This is contrary to another popular belief that female giraffes form large groups to communally care for their young—this study, published this week in the Journal of Zoology presents the first evidence to show that actually, the opposite is true.

Giraffe populations have declined by 40 percent in the last 30 years, and there are now thought to be fewer than 98,000 individuals remaining in the wild.

In recognition of their drastic decline in the wild, they have recently been listed as "Vulnerable" on the International Union for Conservation in Nature's Red List of Threatened Species.

However, conservation review is ongoing due to current debate over their taxonomic status, since some subspecies may be even more at risk of extinction than is currently recognized.

"This research adds another important piece to the puzzle of understanding how giraffes live in the wild," added Muller.

"Giraffes are a threatened species, suffering ongoing decline across Africa, and this research highlights how they are actually an incredibly misunderstood species. We can only manage and conserve giraffe populations effectively if we properly understand their behaviour and ecology, which we are only just beginning to do.

"Despite their prominence, giraffes have been significantly understudied in comparison to other charismatic African mammals. "The common misconception is that giraffes are 'everywhere' in Africa, yet recent research efforts have highlighted the fragmented and rapidly declining nature of their populations.

"Their recent listing as 'Vulnerable' on the IUCN red list is a valuable step towards recognizing their potential to become extinct, and more research is sorely needed to understand the threats and challenges they face in the wild."

The next steps for this research will be to replicate the findings in other areas of Africa. This is one case study from East Africa, and more research is needed to see if the same effects are observed in other giraffe populations. Results can be used to understand how the management of habitats, environmental and social variables can support the conservation of giraffe populations.