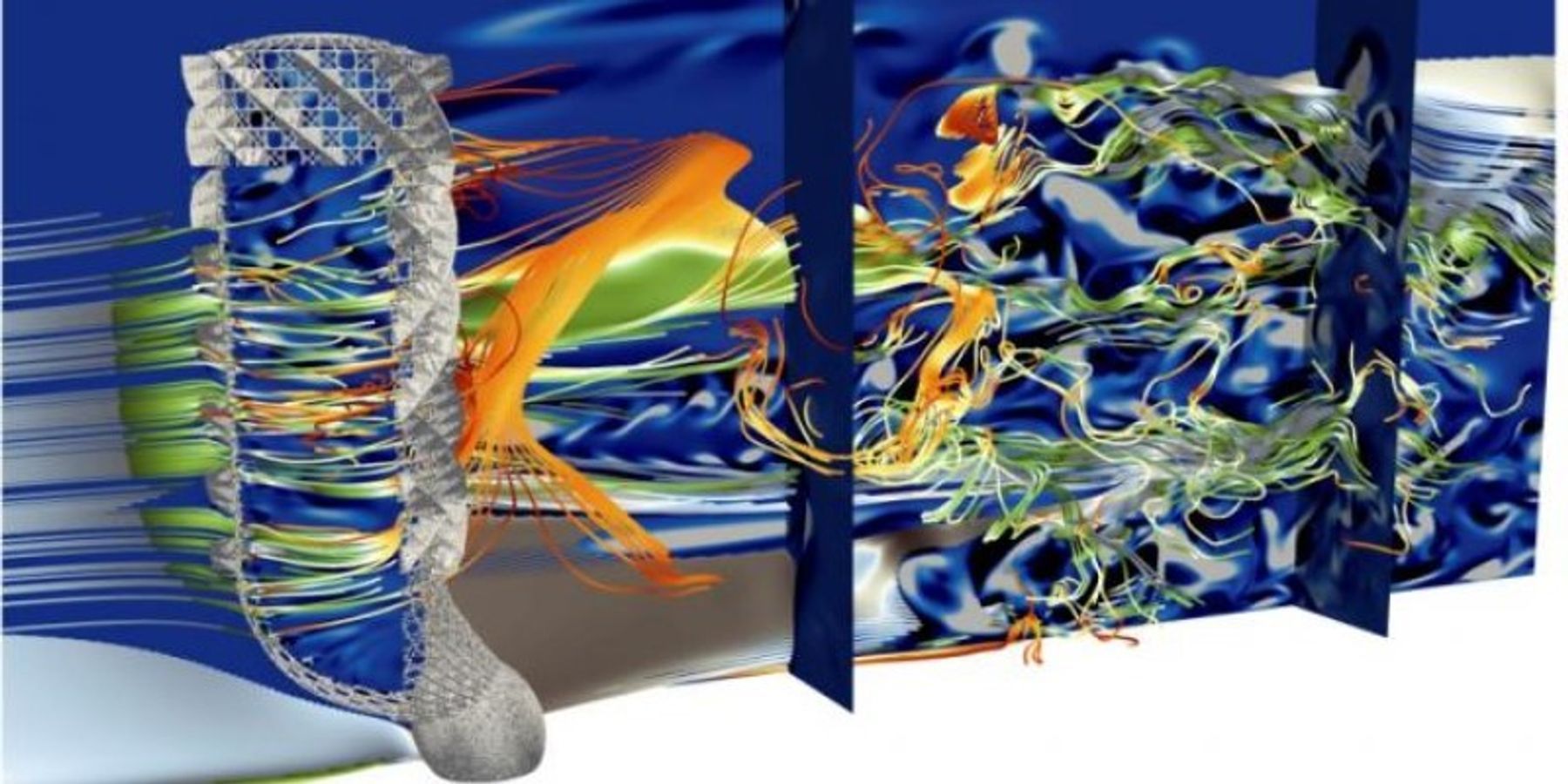 Hydrodynamic field inside and outside the skeletal structure of the Euplectella aspergillum glass sponge. The field was reconstructed using CINECA super-computers. Kinetic methodologies and advanced computational codes have allowed for the accurate reconstruction of the living conditions of the sponges, highlighting their remarkable structural and fluid dynamic properties.
G. Falcucci

ROME, Italy — The remarkable structural properties of the basket sponge (Euplectella aspergillum) might seem fathoms removed from human-engineered structures. However, insights into how the organism's latticework of holes and ridges influences the hydrodynamics of seawater in its vicinity could lead to advanced designs for buildings, bridges, marine vehicles and aircraft, and anything that must respond safely to forces imposed by the flow of air or water.

While past research has investigated the structure of the sponge, there have been few studies of the hydrodynamic fields surrounding and penetrating the organism, and whether, besides improving its mechanical properties, the skeletal motifs of E. aspergillum underlie the optimization of the flow physics within and beyond its body cavity.

A collaboration across three continents at the frontiers of physics, biology, and engineering led by Giacomo Falcucci (from the Tor Vergata University of Rome and Harvard University), in collaboration with Sauro Succi (Italian Institute of Technology), and Maurizio Porfiri (Tandon School of Engineering, New York University) applied super computational muscle and special software to gain a deeper understanding of these interactions, creating a first-ever simulation of the deep-sea sponge and how it responds to and influences the flow of nearby water.

The work, "Extreme flow simulations reveal skeletal adaptations of deep-sea sponges" published in the journal Nature, revealed a profound connection between the sponge's structure and function, shedding light on both the basket sponge's ability to withstand the dynamic forces of the surrounding ocean and its ability to create a nutrient-rich vortex within the body cavity "basket."

"This organism has been studied a lot from a mechanical point of view because of its amazing ability to deform substantially in spite of its brittle, glassine structure," said first author Falcucci. "We were able to investigate aspects of hydrodynamics to understand how the geometry of the sponge offers a functional response to fluid, to produce something special with respect to interaction with water."

"By exploring the fluid flow within and outside the body cavity of the sponge, we uncovered the footprints of an expected adaptation to the environment. Not only does the sponge's structure contribute to a reduced drag, but also it facilitates the creation of low-velocity swirls within the body cavity that are used for feeding and reproduction," added Porfiri, a coauthor of the study.

The structure of E. aspergillum, reproduced by coauthor Pierluigi Fanelli, of the University of Tuscia, Italy, resembles a delicate glass vase in the form of a thin-walled, cylindrical tube with a large central atrium, siliceous spicules—thus their commonly used appellation, "glass sponges." The spicules are composed of three perpendicular rays, giving them six points. The microscopic spicules "weave" together to form a very fine mesh, which gives the sponge's body a rigidity not found in other sponge species and allows it to survive at great depths in the water column.

To understand how Venus flower basket sponges do this, the team made extensive use of the MARCONI100 exascale-class computer at the CINECA high performance computing center in Italy, which is capable of creating comprehensive simulations using billions of dynamic, temporospatial data points in three dimensions.

The researchers also exploited special software developed by study coauthor Giorgio Amati, of SCAI (Super Computing Applications and Innovation) at CINECA, Italy. The software enabled super computational simulations based on Lattice Boltzmann methods, a class of computational fluid dynamics methods for complex systems that represents fluid as a collection of particles and tracks the behavior of each of them.

The in silico experiments, featuring approximately 100 billion virtual particles, reproduced the hydrodynamic conditions on the deep-sea floor where E. aspergillum lives. Results processed by Vesselin K. Krastev at Tor Vergata University of Rome allowed the team to explore how the organization of holes and ridges in the sponge improves its ability to reduce the forces applied by moving seawater (a mechanical engineering question formulated by Falcucci and Succi), and how its structure affects the dynamics of flow within the sponge body cavity to optimize selective filter feeding and gamete encounter for sexual reproduction (a biological question formulated by Porfiri and a biologist expert on ecological adaptations in aquatic creatures, coauthor Giovanni Polverino from the Centre for Evolutionary Biology at The University of Western Australia, Perth).

"This work is an exemplary application of discrete fluid dynamics in general and the Lattice Boltzmann method, in particular," said coauthor Succi. Succi is internationally recognized as one of the fathers of the Lattice Boltzmann Method. "The accuracy of the method, combined with access to one of the top super computers in the world made it possible for us to perform levels of computation never attempted before, which shed light on the role of fluid flows in the adaption of living organisms in the abyss."

"Our investigation of the role of the sponge geometry on its response to the fluid flow, has a lot of implications for the design of high-rise buildings or, really, any mechanical structure, from skyscrapers to low-drag novel structures for ships, or fuselages of airplanes," said Falcucci. "For example, will there be less aerodynamic drag on high-rise buildings built with a similar latticework of ridges and holes? Will it optimize the distribution of forces applied? Addressing these very questions is a key objective of the team."