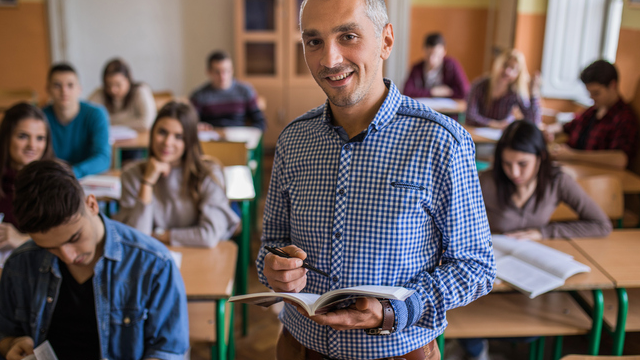 A new Portland State University study found that graduate students are on board with wanting to adopt interactive teaching methods, but often don't get the training or support they need from their institutions to do so.

Research has shown that students may benefit more from the use of student-centered teaching strategies such as small-group discussions, in-class "clicker" questions, demonstrations, and question-answer sessions than they would from a professor giving a traditional lecture. But despite national calls to adopt what's known as evidence-based teaching practices, many science faculty have been slow to do so.

The study, led by PSU biology PhD student Emma Goodwin, focused on graduate students, whom she says play a critical role in responding to the push for increased adoption of evidence-based teaching practices—not only because they serve as teaching assistants in undergraduate classrooms, but they will also be future faculty members if they choose to pursue academia as a career.

Their work, published online Aug. 24 in the journal CBE - Life Sciences Education, supports a recent study by Shortlidge published in PLOS One, which found that PhD students who spend time developing their teaching skills can be just as successful in their research, if not more so, than those who do not.

Goodwin's study found that most graduate students in the sample were aware of and valued evidence-based teaching, but only 37.5 percent had implemented the methods in classes or labs. Barriers included a lack of instructional training opportunities, little control over the curriculum and a perception that their time should prioritize research over teaching.

"It's great to know about something, but actually practicing a behavior is crucial to using it in the future," Goodwin said. "If they don't have the experiences where they're actually practicing these teaching methods as graduate students, then do we know for sure that they'll use them as faculty, even if they want to?"

Shortlidge said that a good first step would be to give graduate students techniques they can use within the confines of the kinds of courses they teach.

"I can't overemphasize enough how important it is to consider this alongside building up research skills," Shortlidge said. "A graduate student who wants to stay in academia may end up working in a teaching-intensive position where research is not a significant percentage of their expectations. Giving them the opportunities to build up that skill set is important so they can walk into their positions fully equipped to do a good job."