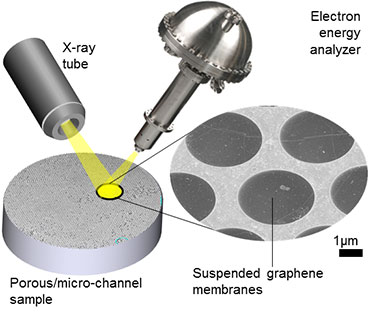 Drawing shows the set-up for an X-ray photoelectron spectroscopy instrument incorporating suspended, electron-transparent graphene membranes—or windows—that separate the sample from the high-vacuum detection system.NISTNow, researchers from the National Institute of Standards and Technology (NIST), ELETTRA (Italy) and Technical University of Munich (Germany) have found that graphene—a single-atom-thick sheet of carbon—could make using XPS to study materials in these environments much less expensive and complicated than the conventional approach.

Their results were published in the journal Nanoscale.*

Researchers have analyzed cells and microorganisms using visible light, which, while informative and gentle, cannot be used to probe objects much smaller than about 500 nanometers. But many of life’s most important processes and interactions take place at much smaller length scales. The same is true with batteries: everything that can go wrong with them takes place at the tiny interfaces between the electrodes and the electrolyte—far beyond the reach of optical microscopes.

Many researchers would like to use X rays or electrons to look deeper into these materials, but few labs have the sophisticated equipment necessary to do so, and those labs that are so outfitted are often too pricey for today’s budget-conscious scientists.

XPS works by bombarding the surface under study with X rays. The atoms on the surface of the material absorb the X-ray energy and re-emit that energy as photoelectrons. Scientists study the kinetic energy and number of the emitted electrons for clues about the sample’s composition and electronic state.

Because X rays and photoelectrons interact with the air, XPS has to be performed under high vacuum, which makes it hard to study materials that have to be in a pressurized environment. What researchers needed was a window material that was nearly transparent to X rays and photoelectrons, but impermeable to gases and liquids and strong enough to withstand the mechanical stress of one atmosphere’s worth of pressure.

Knowing that graphene, the wonder material of the 21st century, has these properties, the group explored using it as a window to separate their sample stage’s atmospheric pressure liquid compartment from the high-vacuum conditions inside the electron spectrometer.

According to NIST researcher Andrei Kolmakov, their results demonstrate that more than enough X rays—and resultant photoelectrons—are able to pass through the graphene window to produce good quality XPS data from liquids and gases.

As an added bonus, the group was also able to measure the intensity of radiation needed to create bubbles in water, a frequently unwanted occurrence that happens when the X rays split water into oxygen and hydrogen. Knowing the point at which bubbles form, they were able to define an upper limit on the intensities of the X rays (or electrons) that can be used in this approach.

“We think our work could fill a much-needed gap,” says Kolmakov. “There are many scientists whose work would benefit from using XPS at ambient pressure, but there are not enough instruments that are equipped to analyze the samples under these conditions, and the ones out there are often too costly to use. Our design is far simpler and has the potential to reduce costs to the level that this type of measurement could be afforded by many more labs. With this imaging capability, other researchers could, for example, learn much more about how to create longer- lasting batteries and develop safer and more effective drugs.”

Of course, as often happens with new technologies, the approach has a few challenges and limitations. Kolmakov says that the adhesion of the graphene to the surface surrounding the opening needs to be improved. Moreover, the barrage of X rays degrades atomically thin graphene over time, so the team is planning to look for ways to mitigate that, if possible.