May 18, 2015|2 min readUniversity of Texas Health Science Center at Houston 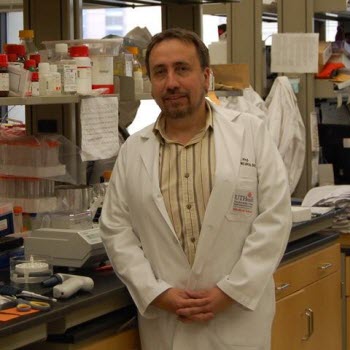 A UTHealth team in Houston led by Claudio Soto, Ph.D., has discovered that grass plants can transport infectious prions.Photo courtesy of the University of Texas Health Science Center at HoustonPrions are the protein-based infectious agents responsible for a group of diseases called transmissible spongiform encephalopathy, which includes bovine spongiform encephalopathy (mad cow disease) in cattle, scrapie in sheep, variant Creutzfeldt-Jakob disease in humans and chronic wasting disease (CWD) in deer, elk and moose. All are fatal brain diseases with incubation periods that last years.

CWD, first diagnosed in mule deer in Colorado in the late 1960s, has spread across the country into 22 states, according to the Centers for Disease Control and Prevention (CDC), including the counties of El Paso and Hudspeth in Texas. In northeastern Colorado and southeastern Wyoming, the disease is endemic. Soto's team sought to find out why.

"There is no proof of transmission from wild animals and plants to humans," said lead author Claudio Soto, Ph.D., professor of neurology at UTHealth Medical School and director of the UTHealth George and Cynthia W. Mitchell Center for Alzheimer's Disease and Other Brain Related Illnesses. "But it's a possibility that needs to be explored and people need to be aware of it. Prions have a long incubation period."

Soto's team analyzed the retention of infectious prion protein and infectivity in wheat grass roots and leaves incubated with prion-contaminated brain material and discovered that even highly diluted amounts can bind to the roots and leaves. When the wheat grass was consumed by hamsters, the animals were infected with the disease. The team also learned that infectious prion proteins could be detected in plants exposed to urine and feces from prion-infected hamsters and deer.

Researchers also found that plants can uptake prions from contaminated soil and transport them to different parts of the plant, which can act as a carrier of infectivity. This suggests that plants may play an important role in environmental prion contamination and the horizontal transmission of the disease.

To minimize the risk of exposure to CWD, the CDC recommends that people avoid eating meat from deer and elk that look sick or test positive for CWD. Hunters who field-dress deer in an affected area should wear gloves and minimize handling of the brain and spinal cord tissues.

"This research was done in experimental conditions in the lab," Soto said of the next step. "We're moving the research into environmental contamination now."