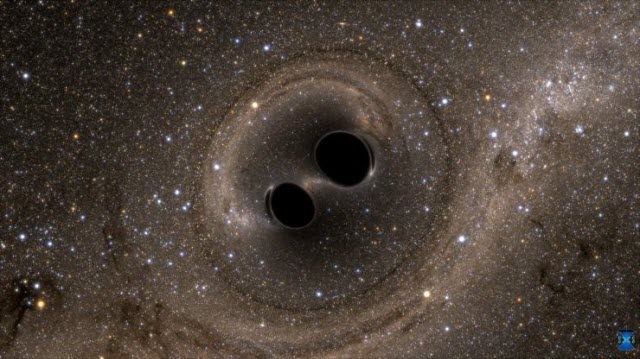 The collision of two black holes holes—a tremendously powerful event detected for the first time ever by the Laser Interferometer Gravitational-Wave Observatory, or LIGO—is seen in this still from a computer simulation. Image Credit: SXS, the Simulating eXtreme Spacetimes (SXS) project

The 2017 Nobel Prize in Physics has been awarded to Rainer Weiss, Kip Thorne, and Barry Barish  “for decisive contributions to the LIGO detector and the observation of gravitational waves.” Weiss proposed the Laser Interferometer Gravitational-Wave Observatory (LIGO) as a means to detect gravitational waves. Thorne supplied the astrophysical theory that ultimately led to their confirmation in September of 2015.

Gravitational waves were detected by the LIGO Scientific Collaboration (LSC), which was founded by Barish. The LSC is a group of more than 1,000 scientists around the world that includes 17 Georgia Tech faculty, postdoctoral researchers, and students.

Gravitational waves are ripples in the fabric of space-time caused by cataclysmic events in the universe. Their existence was a major prediction of Albert Einstein’s 1915 general theory of relativity. Because gravitational waves carry information about their dramatic origins that cannot otherwise be obtained, their detection opened an unprecedented new window onto the cosmos.

Since 2015, LIGO has announced four gravitational wave detections, including one last week. Each was caused by violent collisions of binary black holes.

Below are reactions from Georgia Tech, including School of Physics professor Laura Cadonati, who serves as deputy spokesperson for the LSC.

“This year’s Nobel award honors three scientists whose vision and dedication have made it possible to discover gravitational waves, explore answers to questions in fundamental physics and unlock a new window on the universe,” Cadonati says. “I am grateful for the opportunity to work with them in the realization of this vision, together with the hundreds of colleagues in the LIGO Scientific Collaboration. Today’s prize is also a celebration of collaboration and collegiality in science; we all feel honored.”

“The Nobel Committee honored three people who made astronomy with gravitational waves possible,” Shoemaker says. “They laid down the theoretical foundations of gravitational-wave sources and paved the way in the design of the instruments to detect these sources. They also motivated generations of scientists to answer the call to gravitational-wave astronomy and provided the political courage to undertake the task. It is a great privilege to join in honoring their work and that of all of my colleagues in gravitational-wave physics.”

Pablo Laguna
LSC member and chair of the School of Physics

“This year’s Physics Nobel Prize recognizes three scientists that led in establishing the foundations for the monumental achievement of building an instrument (LIGO) to learn about the cosmos from observations of changes in the fabric of space-time (gravitational waves)."

Paul M. Goldbart
Dean of the College of Sciences, Betsy Middleton and John Clark Sutherland Chair and professor in the School of Physics Professor

“It is a joy to add my acknowledgement of these pioneers of gravitational radiation. Their tenacity has paved the way for our colleagues to participate in this extraordinary scientific adventure that heralds the dawn of a new era in astronomy.”