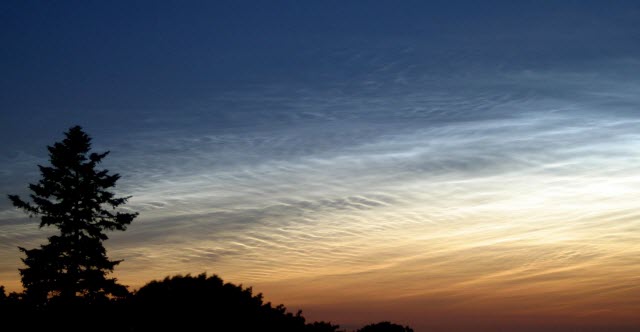 Gravity waves form in the atmosphere as a result of destabilizing processes, for example at weather fronts, during storms, or when air masses stroke over mountain ranges. They can occasionally be seen in the sky as bands of cloud. For weather forecast and climate models, however, they are mostly 'invisible' due to their short wavelength.Photo credit: Gerd Baumgarten

FRANKFURT — Gravity waves form in the atmosphere as a result of destabilizing processes, for example at weather fronts, during storms or when air masses stroke over mountain ranges. They can occasionally be seen in the sky as bands of cloud. For weather forecast and climate models, however, they are mostly "invisible" due to their short wavelength. The effects of gravity waves can only be taken into consideration by including additional special components in the models. The "MS-GWaves" research unit funded by the German Research Foundation and led by Goethe University Frankfurt has meanwhile further developed such parameterizations and will test them in the second funding period.

Although gravity waves have comparatively short wavelengths of between just a few hundred metres and several hundred kilometres, at times they influence the transport of water vapour as well as large-scale winds and temperature distributions to a considerable degree. This effect is strongest in the upper layers of the atmosphere. These, in turn, have such a strong effect on the lower layers too that a realistic modeling of weather and climate in the atmosphere is impossible without giving due consideration to gravity waves. Gravity waves also play a significant role for air traffic in predicting turbulence and are an important factor in weather extremes, such as heavy rain or storms.

In the first funding period, the ten research institutes participating in the project documented in detail the formation of gravity waves in one of the largest measuring campaigns ever undertaken, using radar, high-performance lasers, rockets, and research planes as well as through laboratory tests. They also refined the hypothesis on the formation and dispersion of gravity waves to such an extent that their development can now be reproduced much more reliably in high-resolution numerical models too.

In a further step, the research unit led by professor Ulrich Achatz of the Department of Atmospheric and Environmental Sciences at Goethe University Frankfurt has used these findings to improve parameterizations, which serve to describe the influence of gravity waves, in weather and climate models with typically coarser resolution. They have refined the weather and climate model ICON used by Germany's National Meteorological Service (DWD) and the Max Planck Institute for Meteorology. The new model, UA-ICON, allows more precise predictions for the upper atmosphere and can be operated with different resolutions, so that gravity waves can either be simulated in it for test purposes or must be parameterized in the operational mode. The advanced parameterizations are now being integrated in this model and tested in the second funding period.

The project will also focus on impacts on weather prediction and climate modelling. An important aspect in this context is a better description of the interaction between gravity waves and ice clouds (cirrus), undertaken in cooperation with the University of Mainz. It could well be that this plays an important role for the climate.