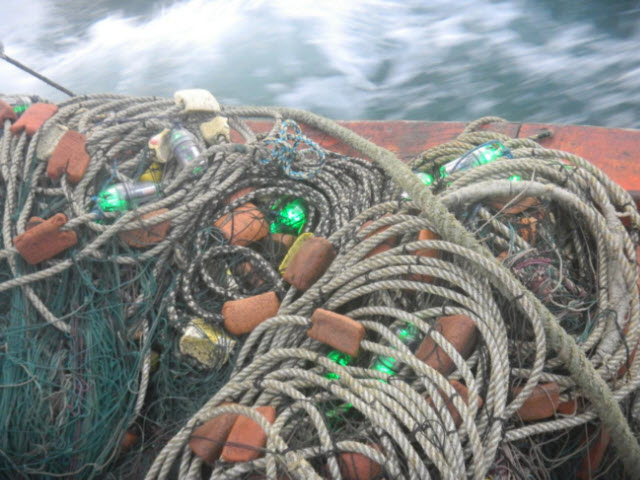 LED lights used at sea.Photo Courtesy of: University of Exeter

Illuminating fishing nets is a cost-effective means of dramatically reducing the number of sea turtles getting caught and dying unnecessarily, conservation biologists at the University of Exeter have found.

Dr Jeffrey Mangel, a Darwin Initiative research fellow based in Peru, and Professor Brendan Godley, from the Centre for Ecology and Conservation at the University's Penryn Campus, were part of a team of researchers who found that attaching green battery powered light-emitting diodes (LED) to gillnets used by a small-scale fishery reduced the number of green turtle deaths by 64 per cent, without reducing the intended catch of fish.

The innovative study, carried out in Sechura Bay in northern Peru was supported by ProDelphinus, the UK Government's Darwin Initiative, the National Oceanic and Atmospheric Administration and published in Marine Ecology Progress Series. It is the first time that lighting technology has been trialled in a working fishery. At a cost of £1.40 ($2) for each LED light, the research showed that the cost of saving one turtle was £24 ($34)—a sum which would be reduced if the method was rolled out at larger scale.

Multiple populations of sea turtle species use Peruvian coastal waters as foraging grounds including green, olive ridley and hawksbill, loggerhead and leatherback. Peru's gillnet fleet comprises the largest component of the nation's small-scale fleet and is conservatively estimated to set 100,000 km of net per year in which thousands of turtles will die as 'bycatch' or unintentionally.

The researchers used 114 pairs of nets, each typically around 500-metres in length. In each pair, one was illuminated with light-emitting diodes (LEDs) placed every ten metres along the gillnet floatline. The other net in the pair was the control and not illuminated. The control nets caught 125 green turtles while illuminated nets caught 62. The target catch of guitarfish was unaffected by the net illumination. They are now working with larger fisheries in Peru and with different coloured lights to see if the results can be repeated and applied with more critically endangered species.

"This is very exciting because it is an example of something that can work in a small-scale fishery which for a number of reasons can be very difficult to work with. These lights are also one of very few options available for reducing turtle bycatch in nets," said Dr Mangel, who is one of the lead authors on the paper and ProDelphinus Research Co-ordinator.

"The turtle populations in the eastern Pacific are among the world's most vulnerable and we are hoping that by reducing bycatch, particularly in gillnets, will help with the management and eventual recovery of these populations."

Thousands of endangered turtles die as bycatch in gillnet fisheries around the world and it is hoped that this study will help to provide a solution. Professor Brendan Godley notes, "It is exciting to be part of research that is highlighting innovative methods that may assist the move towards sustainability in these fisheries. Understanding costings will help emphasize the need for institutional support from national ministries, international non-governmental organizations and the broader fisheries industry to make possible widespread implementation of net illumination as a sea turtle bycatch reduction strategy."

"Bycatch is a complex, global issue that threatens the sustainability and resilience of our fishing communities, economies and ocean ecosystems," said Eileen Sobeck, assistant NOAA administrator for fisheries. "Funding research like this is key to NOAA's efforts to reduce bycatch. Through this work, we can better protect our natural resources."