The combination of green tea extract and exercise reduced the severity of obesity-related fatty liver disease by 75 percent in mice fed a high-fat diet, according to Penn State researchers, whose recent study may point to a potential health strategy for people.

The outcome is important, explained Joshua Lambert, associate professor of food science, because nonalcoholic fatty liver disease is a significant global health problem that is expected to worsen. Because of the high prevalence of risk factors such as obesity and type 2 diabetes, fatty liver disease is forecast to afflict more than 100 million people by 2030. And there are currently no validated therapies for the disease.

In the study, mice fed a high-fat diet for 16 weeks that consumed green tea extract and exercised regularly by running on a wheel were found to have just a quarter of the lipid deposits in their livers compared to those seen in the livers of a control group of mice. Mice that were treated with green tea extract alone or exercise alone had roughly half as much fat in their livers as the control group.

In addition to analyzing the liver tissues of mice in the study, which was published recently in the Journal of Nutritional Biochemistry, researchers also measured the protein and fat content in their feces. They found that the mice that consumed green tea extract and exercised had higher fecal lipid and protein levels.

"By examining the livers of these mice after the study concluded and by screening their feces during the research, we saw that the mice that consumed green tea extract and exercised actually were processing nutrients differently—their bodies were handling food differently," Lambert said. 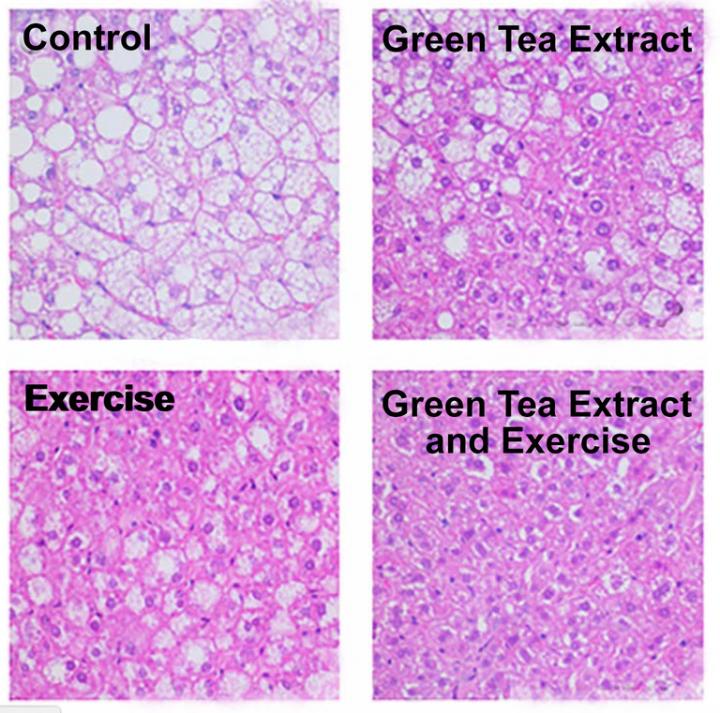 The results of the experiment are shown clearly in these slides showing liver tissues. Mice that consumed green tea extract and exercised regularly had just a quarter of the lipid deposits in their livers compared to those seen in the livers of a control group of mice. Mice that were treated with green tea extract alone or exercise alone had roughly half as much fat in their livers as the control group.
Joshua Lambert research group/Penn State

"We think the polyphenols in green tea interact with digestive enzymes secreted in the small intestine and partially inhibit the breakdown of carbohydrates, fat and protein in food," he added. "So, if a mouse doesn't digest the fat in its diet, that fat and the calories associated with it pass through the mouse's digestive system, and a certain amount of it ends up coming out in its feces."

It may be significant, Lambert explained, that mice treated with both green tea extract and exercise had higher expression of genes related to the formation of new mitochondria. That gene expression is important, he said, because it provides markers that will help researchers understand the mechanism by which green tea polyphenols and exercise might work together to mitigate fatty liver deposits.

More research is needed to see if there is a synergy created by green tea extract and exercise working together to reduce fat deposited in the liver, or if the effects are simply additive, Lambert pointed out. His research group in the College of Agricultural Sciences for 12 years has studied the health benefits of polyphenols—often called antioxidants—from green tea, cocoa, avocados, and other sources.

In previous related research, Lambert and colleagues demonstrated that green tea extract and exercise together sharply reduced body mass and improved cardiovascular health of high-fat-fed mice. But because no human trials assessing the health benefits and risks of green tea combined with exercise have been conducted, he urges caution for people who decide to experiment with the health strategy on their own.

"I believe people should engage in more physical activity, and replacing high-calorie beverages with decaffeinated, diet green tea—which has no calories—is a smart move," he said. "Combining the two might have health benefits for people, but we don't have the clinical data yet."