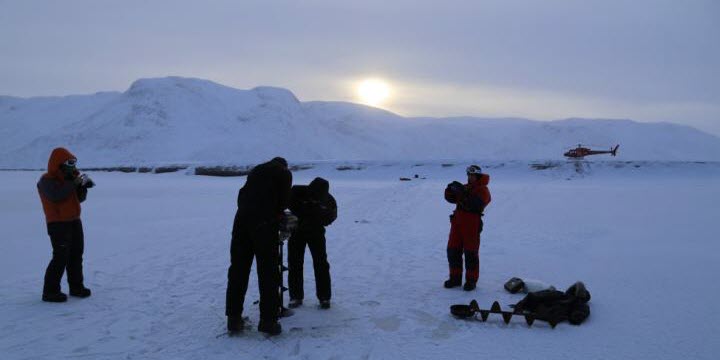 An ice auger is used to drill a borehole through the proglacial Isortoq River seasonal ice cover.
Lincoln Pitcher

Liquid meltwater can sometimes flow deep below the Greenland Ice Sheet in winter, not just in the summer, according to work led by the Cooperative Institute for Research in Environmental Sciences at the University of Colorado Boulder and published in the AGU journal Geophysical Research Letters Apr. 9. That finding means that scientists seeking to understand sea-level rise and the future of the Greenland Ice Sheet need to collect data during the dark Arctic winter with scant hours of daylight and temperatures that dip below -40 degrees.

"This observation raises questions for the Greenland research community, and motivates the need for future work on wintertime hydrology in Greenland," said lead author Lincoln Pitcher, a Visiting Fellow at CIRES, part of the University of Colorado Boulder. Pitcher began this work while he was a graduate student at the University of California Los Angeles, and his co-authors are from seven different states and Denmark.

When evidence suggested that some of Greenland's glaciers were storing meltwater through the winter, Pitcher set out for southwest Greenland to see if any of this meltwater was also leaving the ice sheet during winter. In February 2015, he and his colleague Colin Gleason of the University of Massachusetts at Amherst dragged a ground-penetrating radar across frozen rivers downstream of the edge of the ice sheet and drilled boreholes to see if any water was leaving the ice sheet and flowing beneath river ice. They surveyed rivers draining five Greenland Ice Sheet outlet glaciers and discovered meltwater flowing at just one site, the Isortoq River. In summertime, the Isotoq drains meltwater from the terminus of the Isunguata Sermia outlet glacier. In winter, the river appears frozen, but Pitcher and Gleason found slowly flowing liquid water there.

It was "a trickle, not a torrent," Pitcher said, and the water was flowing below half a meter of ice while temperatures were well below zero. Pitcher and Gleason collected water samples and geochemical analysis indicated that it had come from under the ice sheet itself.

The team concluded that it is possible the bed of the Greenland Ice Sheet can stay wet and drain small amounts of water year-round. This finding is important for understanding how meltwater from the ice surface moves through the ice sheet, is retained, refreezes and/or ultimately drains into rivers and/or the global ocean.