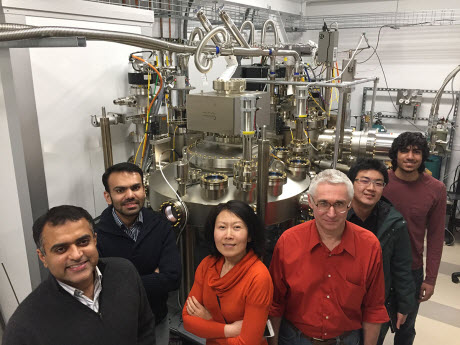 Members of the Jena-Xing Research Group—Debdeep Jena, Moudud Islam, Huili (Grace) Xing, Vladimir Protasenko, Kevin Lee and Shyam Bharadwaj—are pictured in front of one of the molecular beam epitaxy systems used in their latest work.Photo courtesy of Cornell UniversityThe darkest form of ultraviolet light, known as UV-C, is unique because of its reputation as a killer—of harmful organisms.

With wavelengths of between 200 and 280 nanometers, this particular form of UV light penetrates the membranes of viruses, bacteria, mold, and dust mites, attacking their DNA and killing them. Sanitization with UV-C light has been around for more than 100 years, following Niels Finsen’s discovery of UV light as an antidote to tuberculosis, which won the Faroese-Danish physician the 1903 Nobel Prize for Medicine.

Currently, most deep-UV lamps are mercury-based. They pose a threat to the environment, and are bulky and inefficient. A Cornell University research group led by Huili (Grace) Xing and Debdeep Jena, along with collaborators from the University of Notre Dame, has reported progress in creating a smaller, more earth-friendly alternative.

Using atomically controlled thin monolayers of gallium nitride (GaN) and aluminum nitride (AlN) as active regions, the group has shown the ability to produce deep-UV emission with a light-emitting diode (LED) between 232 and 270 nanometer wavelengths. Their 232- nanometer emission represents the shortest recorded wavelength using GaN as the light-emitting material. The previous record was 239 nanometers, by a group in Japan.

Postdoctoral researcher SM (Moudud) Islam, the lead author, said: “UV-C light is very attractive because it can destroy the DNA of species that cause infectious diseases, which cause contamination of water and air.”

In the deep-UV range, all three efficiency factors suffer, but this group found that by using gallium nitride instead of conventional aluminum gallium nitride, both IQE and light extraction efficiency are enhanced.

Injection efficiency is improved through the use of a polarization-induced doping scheme for both the negative (electron) and positive (hole) carrier regions, a technique the group explored in previous work.

Now that the group has proven its concept of enhanced deep-UV LED efficiency, its next task is packaging it in a device that could one day go on the market. Deep-UV LEDs are used in food preservation and counterfeit currency detection, among other things.

Further study will include packaging both the new technology and existing technologies in otherwise similar devices, for the purpose of comparison.

“In terms of quantifying the efficiency, we do want to package it within the next few months and test it as if it was a product, and try to benchmark it against a product with one of the available technologies,” Jena said.

The work was supported by grants from the National Science Foundation and the Air Force Office of Scientific Research.