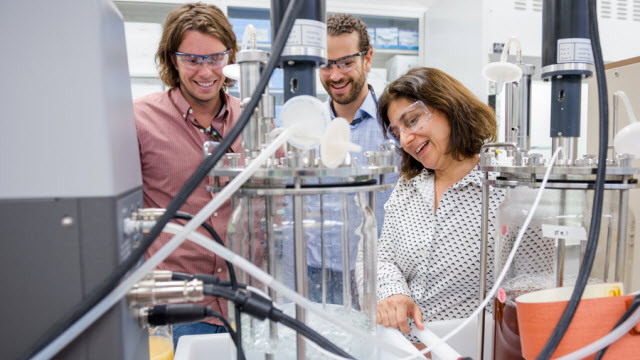 Entrepreneur Tyler Huggins grew up in rural Montana in a family of loggers and miners. But he wanted to have a larger impact on society as a whole, so he decided to launch a startup. He looked at many options, but they just didn’t have the impact he craved.

Until he met Justin Whiteley, a fellow entrepreneur who had been working to build next-generation battery technology near Silicon Valley. The pair formed Emergy. It combined Huggins’ environmental engineering skills and desire to protect the nature he grew up around with Whiteley’s technical efficiency and commercialization mindset. 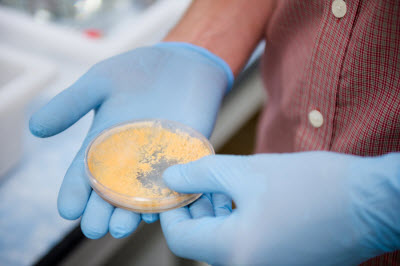 A sample of Emergy's patented bio-designed porous carbon. Photo credit: Argonne National LaboratoryThe melding of backgrounds and skills produced a way to redesign the manufacturing one of the most widely used materials in our economy—porous, or activated, carbon—to make it sustainable, higher-performance, and cheaper to produce. The redesigned porous carbon has applications for water and air filtration, chemical production, mining, energy storage, and natural gas and biogas conditioning.

“Conventional carbon materials are produced using unrenewable resources such as coal and energy-intensive processes that carry a high cost and environmental footprint and ultimately result in subpar performance. Instead, we have developed a way to use the efficiency of a living organism to grow carbon from fungi, producing sophisticated structures that would be difficult by any other means and that can be tuned for a specific application,” Huggins said.

Emergy’s patented carbon has incredibly high surface area, making it a tremendously absorbent material.  The precision control over how the organism grows enables manipulation to make it function in a variety of different ways for industry.

“Since we do have precision control over how the organism grows, by changing the organism and not the manufacturing process, we can actually grow a variety of materials for a whole suite of applications in a single facility using a single process line,” Whiteley said.

Huggins and Whiteley launched their startup while post docs at the University of Colorado-Boulder and moved to the U.S. Department of Energy’s Argonne National Laboratory in January after earning a spot in Chain Reaction Innovations, the lab’s new program to accelerate cleantech innovation by growing entrepreneurs.

Chain Reaction Innovations provides innovators access to Argonne's deep network of 1,600 multidisciplinary researchers and engineers as well as unique tools, including the Mira supercomputer and the nation's highest-energy X-ray source, the Advanced Photon Source. Through a partnership with mentor organizations, the Polsky Center at the University of Chicago and the Purdue Foundry at Purdue University, CRI participants also receive assistance with developing business strategies, conducting market research and finding long-term financing and commercial partners.

“I’ve worked in a variety of battery R&D facilities for a variety of battery startups. One thing that I saw was that the technology I was always working on was never truly commercializable. It was always very interesting,” Whiteley said. “But once I discovered this new biologically derived porous carbon material, I saw a material that could be immediately used in the marketplace.”

At Argonne, Emergy set up a bench-scale manufacturing process and took advantage of the multi-million-dollar characterization equipment and world-leading scientists to help reach their performance metrics, which include improving porosity by 25 to 100 percent and integration of precious metals at the nanoscale into the growing fungi.

“This is an encouraging milestone for us,” Whiteley said. “It opens up applications.”

Emergy has spent the last month preparing to grow kilograms of its patented carbon for a fall pre-commercial scale test with a leading multi-national company. Emergy hopes to set up similar tests in a variety of industries.

“My goal is to help Emergy scale up the process so that it can get a commercial partner,” Urgun-Demirtas said. “This also helps me show industry we have the skill set and scale up facilities at Argonne to scale up any process.”

EERE's Advanced Manufacturing Office (AMO) supports applied research, development and demonstration of new materials and processes for energy efficiency in manufacturing as well as platform technologies for the manufacturing of clean energy products.