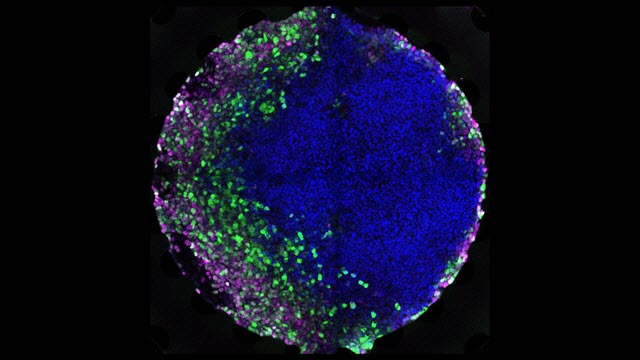 Colony of human embryonic stem cells that was exposed to a microfluidic gradient of a morphogen (BMP4), resulting in the establishment of different cell types arranged in layers.Credit: Andrea Manfrin, EPFL

It's no surprise that using human embryos for biological and medical research comes with many ethical concerns. Correct though it is to proceed with caution in these matters, the fact is that much science would benefit from being able to study human biology more accurately.

One solution lies with alternative tools--what scientists call in vitro models. But despite some advancements with adult tissues, when it comes to modeling the early developmental processes of the human embryo, things become complicated.

Now, scientists at EPFL's Institute of Bioengineering have simulated aspects of embryo formation in vitro starting from embryonic stem cells.

"A tricky problem in reliably constructing tissues outside of an organism in general is how to present key signaling molecules, also termed morphogens, to the cells in culture at the right time and dose," says EPFL professor Matthias Lütolf, whose research group led the research. "Simply exposing a collection of stem cells to a single concentration of a morphogen ends in uncontrolled morphogenesis because the cells lack important instructions."

But in a developing embryo, stem cells receive a highly dynamic range of morphogen concentrations from so-called "signaling centers." It is this gradient of morphogens that tells stem cells what type of specialized cell and tissue to become.

To implement this principle, Dr. Andrea Manfrin in Lütolf's lab developed a method for exposing human embryonic stem cells in culture to gradients of morphogens, mimicking the real-life conditions of gastrulation--an early stage of the developing embryo where its cells begin to transform into different cell types and tissues.

The method involves growing the stem cells in a microfluidic device, which is a chip with small channels that allow the precise control of tiny amounts of fluid. The researchers grew stem cells in a culture chamber on the microfluidic chip, and were able to expose them to carefully controlled concentration gradients of various morphogens.

The results were impressive: the cells developed and organized into domains of different cell types, depending on the concentration they were exposed to, like they do in the body. In fact, the scientists report that they were able to successfully mimic aspects of gastrulation, paving the way for growing specific human tissues in the lab in a more controlled manner.

"We hypothesized that engineering an artificial signaling center 'ex vivo' could allow us to steer the self-organization of a stem cell population towards a desired outcome," explains Manfrin. "This has obvious advantages for tissue and organ engineering."

These advantages include new tools for drug testing and regenerative medicine. The new technique can also help scientists study processes related to developmental biology--like gastrulation--and could provide alternatives to animal experimentation in some areas of research.

"One of our long-term goals is to engineer organs for transplantation," says Lütolf, who is already working with groups at the Lausanne University Hospital (CHUV) and elsewhere to generate miniaturized organs ('organoids') from patient-derived cells. "We are still far from growing functional organs in a dish; but recent progress in stem cell biology and bioengineering make me optimistic that this can become a reality. The key is to better understand how cells themselves build tissues and organs in the embryo."