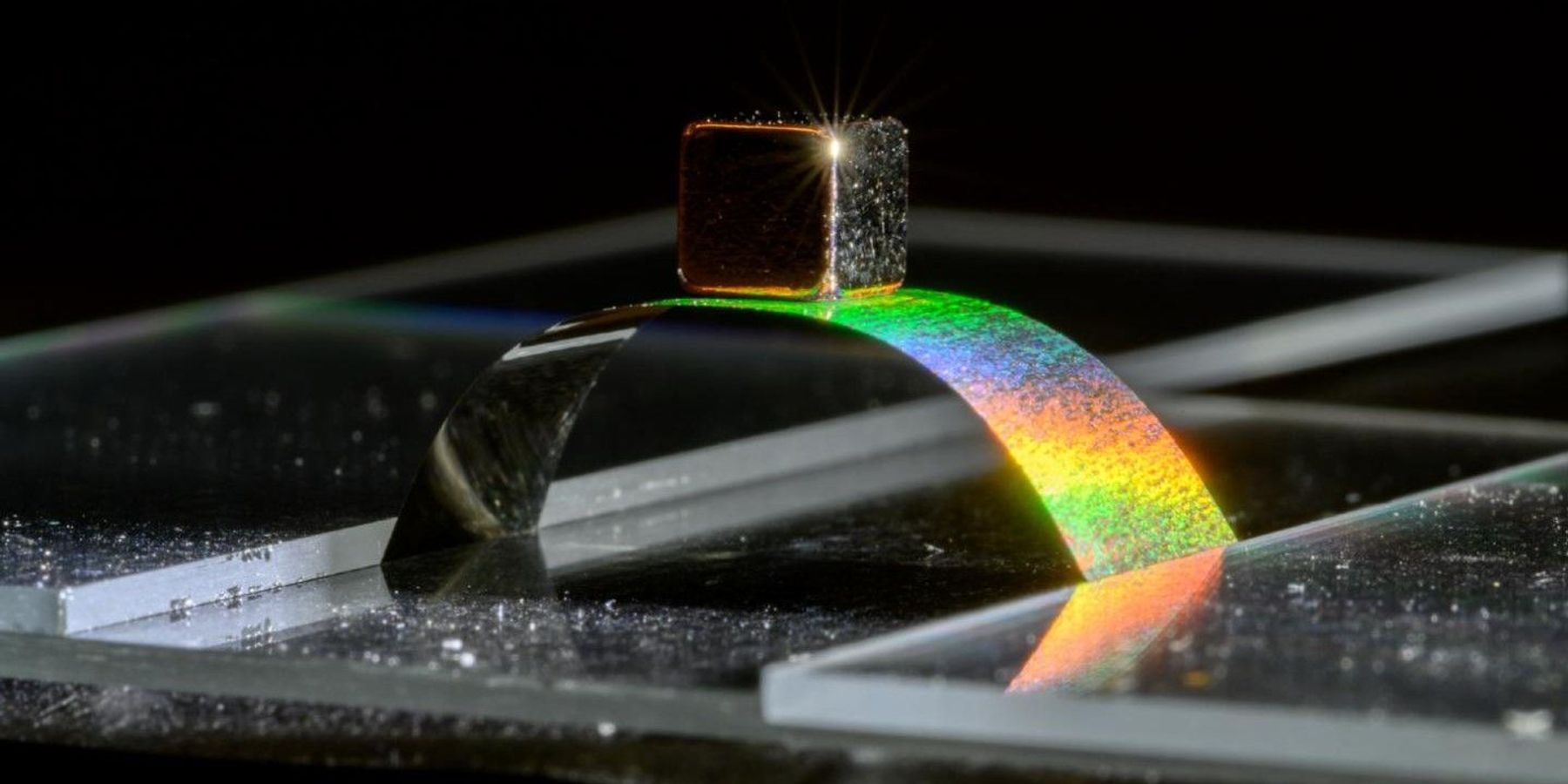 This strip of metallic wood, about an inch long and one-third inch wide, is thinner than household aluminum foil but is supporting more than 50 times its own weight without buckling. If the weight were suspended from it, the same strip could support more than six pounds without breaking.
Penn Engineering

Natural wood remains a ubiquitous building material because of its high strength-to-density ratio; trees are strong enough to grow hundreds of feet tall but remain light enough to float down a river after being logged.

For the past three years, engineers at the University of Pennsylvania's (Penn) School of Engineering and Applied Science have been developing a type of material they've dubbed "metallic wood." Their material gets its useful properties and name from a key structural feature of its natural counterpart: porosity. As a lattice of nanoscale nickel struts, metallic wood is full of regularly spaced cell-sized pores that radically decrease its density without sacrificing the material's strength.

The precise spacing of these gaps not only gives metallic wood the strength of titanium at a fraction of the weight, but unique optical properties. Because the spaces between gaps are the same size as the wavelengths of visible light, the light reflecting off of metallic wood interferes to enhance specific colors. The enhanced color changes are based on the angle that light reflects off of the surface, giving it a dazzling appearance and the potential to be used as a sensor.

Penn engineers have now solved a major problem preventing metallic wood from being manufactured at meaningful sizes: eliminating the inverted cracks that form as the material is grown from millions of nanoscale particles to metal films big enough to build with. Preventing these defects, which have plagued similar materials for decades, allows strips of metallic wood to be assembled in areas 20,000 times greater than they were before.

James Pikul, assistant professor in the Department of Mechanical Engineering and Applied Mechanics, and Zhimin Jiang, a graduate student in his lab, have published a study demonstrating this improvement in the journal Nature Materials.

When a crack forms within an everyday material, bonds between its atoms break, eventually cleaving the material apart. An inverted crack, by contrast, is an excess of atoms; in the case of metallic wood, inverted cracks consist of extra nickel that fills in the nanopores critical to its unique properties.

"Inverted cracks have been a problem since the first synthesis of similar materials in the late 1990s," says Jiang. "Figuring out a simple way of eliminating them has been a long-standing hurdle in the field."

These inverted cracks stem from the way that metallic wood is made. It starts as a template of nanoscale spheres, stacked on top of one another. When nickel is deposited through the template, it forms metallic wood's lattice structure around the spheres, which can then be dissolved away to leave its signature pores.

However, if there are any places where the spheres' regular stacking pattern is disrupted, the nickel will fill those gaps, producing an inverted crack when the template is removed.

"The standard way to build these materials is to start with a nanoparticle solution and evaporate the water until the particles are dry and regularly stacked. The challenge is that the surface forces of water are so strong that they rip the particles apart and form cracks, just like cracks that form in drying sand," Pikul says. "These cracks are very difficult to prevent in the structures we are trying to build, so we developed a new strategy that allows us to self-assemble the particles while keeping the template wet. This prevents the films from cracking, but because the particles are wet, we have to lock them in place using electrostatic forces so that we can fill them with metal."

With larger, more consistent strips of metallic wood now possible, the researchers are particularly interested in using these materials to build better devices.

"Our new manufacturing approach allows us to make porous metals that are three times stronger than previous porous metals at similar relative density and 1,000 times larger than other nanolattices," Pikul says. "We plan to use these materials to make a number of previously impossible devices, which we are already using as membranes to separate biomaterials in cancer diagnostics, protective coatings, and flexible sensors."