Image courtesy of the University of Minnesota

A new study led by researchers at the University of Minnesota and Nantes University Hospital in France shows that the bacteria in people’s gut may predict their risk of life-threatening blood infections following high-dose chemotherapy.

The study was published Apr. 28 in Genome Medicine, a peer-reviewed open access journal.

About 20,000 cancer patients receive high-dose chemotherapy each year in preparation for bone marrow or stem cell transplants. Typically about 20 to 40 percent develop blood infections following the chemotherapy. Sadly, about 15-30 percent of those patients die as a result of the infections.

Bacteria are thought to enter the bloodstream through intestinal lesions due to chemotherapy-induced inflammation of the membrane lining the digestive tract. Once the infection begins, patients’ own immune systems are depleted and are often unable to fight off the pathogens and antibiotics often don’t work. 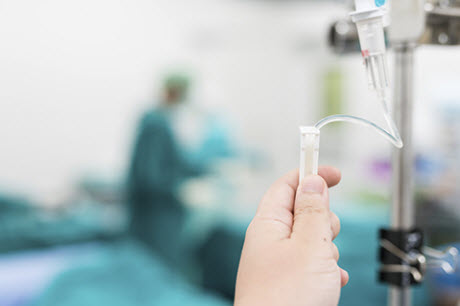 About 20 to 40 percent of high-dose chemotherapy patients develop blood infections following the chemotherapy. Sadly, about 15-30 percent of those patients die as a result of the infections.Photo courtesy of the University of MinnesotaIn this study, the researchers set out to understand how the starting configuration of the gut bacteria, before the patient begins treatment, relates to risk of bloodstream infection. They collected fecal samples from 28 patients with non-Hodgkin’s lymphoma before the patients began chemotherapy. The researchers sequenced the bacterial DNA to measure the health of the bacterial ecosystem in each patient’s gut.

Eleven of the 28 subjects acquired a bloodstream infection following their chemotherapy, but interestingly the researchers found that those patients may have had more than bad luck going against them. They had significantly different mixtures of gut bacteria than the patients who did not get infections.

Using computational tools, the researchers then created an algorithm that can learn which bacteria are good and bad from studying one set of patients, and can then predict whether a new patient it has not seen before will get an infection, with around 85 percent accuracy.

“This method worked even better than we expected because we found a consistent difference between the gut bacteria in those who developed infections and those who did not,” said the study’s co-author Dan Knights, an assistant professor in the University of Minnesota’s Department of Computer Science and Engineering and the Biotechnology Institute.

“This research is an early demonstration that we may be able to use the bugs in our gut to predict infections and possibly develop new prognostic models in other diseases,” Knights added.

While the predictive model used in this study was robust, the researchers caution that their findings are still based on a limited number of patients with a single type of chemotherapy at a single clinic. They say the next step is to validate their approach in a much larger cohort including patients with different cancer types, different treatment types, and from multiple treatment centers.

“We still need to determine if these bacteria are playing any kind of causal role in the infections, or if they are simply acting as biomarkers for some other predisposing condition in the patient,” said study co-author Emmanuel Montassier, a researcher at the Nantes University Hospital and former researcher at the University of Minnesota.

The study was supported by Nantes University Hospital Grant (BRD/10/04-Q) and the Robert Tournut award of the French National Society of Gastroenterology.