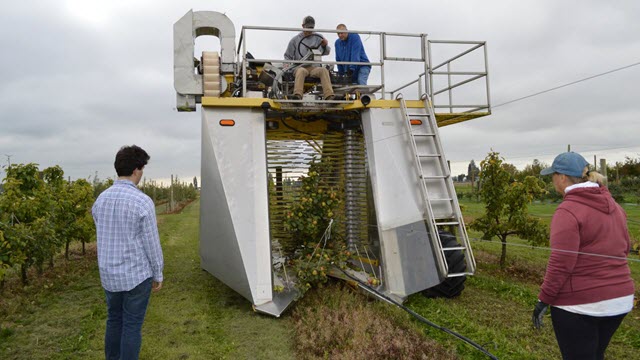 MOUNT VERNON, WASHINGTON — A study out of Washington State University sought to determine if there is a measurable impact of harvest method on the phenolic profile of 'Brown Snout' juice and cider to better inform equipment adoption.

Travis Alexander, Thomas Collins, and Carol Miles also evaluated whether different extraction methods would yield differing output in either quantity or quality of 'Brown Snout' apple juice and cider. Their comprehensive findings are illustrated in their article, "Comparison of the Phenolic Profiles of Juice and Cider Derived from Machine- and Hand-Harvested 'Brown Snout' Specialty Cider Apples in Northwest Washington" as found in the open-access journal HortTechnology, published by the American Society for Horticultural Science.

Phenolics are secondary metabolites that have attracted increasing interest in science and industry in recent years due to their beneficial health effects, primarily for their antioxidant properties. They have been proven to act as reducing agents to free radicals. Phenolics contribute significantly to the sensory profile of fermented cider, especially in those made from cider apple fruit. "Phenolics can impact the pressing of fruit, the clarification of juice, the maturation of cider, and final cider quality, including the attributes of aroma, color, taste, and mouthfeel. And so, we wanted to determine if there was a change in phenolics due to harvest method" stated Collins.

"The 'Brown Snout' specialty cider apple is desired by cider makers for its relatively high levels of phenolics, and over-the-row machine harvesting of 'Brown Snout' has been demonstrated to provide similar yield to hand harvest at a significantly lower cost" says Alexander.

To carry out their research, Miles said they planted a block of 'Brown Snout' apple trees on a low trellis system so that trees were a suitable size to fit the over-the-row small fruit harvester. Each of the eight main plots consisted of an average of nine trees. When the fruit was fully ripe, harvesting was divided equally between hand harvesting by four relatively unskilled agricultural workers and machine harvest by an over-the-row small fruit harvester. When application of the two harvest methods was complete, equal qualities of 'Brown Snout' apples were randomly selected from each yield supply for further evaluation.

The selected fruit were pressed separately and fermented and allowed to mature for five months before final assessments were conducted. At that time, the researchers determined that harvest method and duration of storage were nonsignificant for all parameters measured on juice and cider samples.