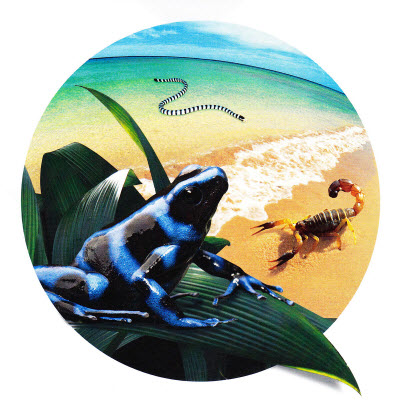 Chemists at The Scripps Research Institute have developed a new method to isolate and analyze toxins produced by frogs, snakes, scorpions and other creatures, opening the door to a vast array of possible therapeutics.Illustration used with permission of Angewandte ChemieLA JOLLA, CA—There are lessons to be learned from venoms.

Scorpions, snakes, snails, frogs, and other creatures are thought to produce tens or even hundreds of millions of distinct venoms. These venoms have been honed to strike specific targets in the body.

For victims of a scorpion’s sting, that spells doom. For scientists, however, the potent molecules in venoms hold the potential to be adapted into medicines. But venoms are difficult to isolate and analyze using traditional methods, so only a handful have been turned into drugs.

Now a team led by scientists at The Scripps Research Institute (TSRI) has invented a method for rapidly identifying venoms that strike a specific target in the body—and optimizing such venoms for therapeutic use.

The researchers demonstrated the new method by using it to identify venoms that block a certain protein on T cells—a protein implicated in multiple sclerosis, rheumatoid arthritis, and other inflammatory disorders. The researchers then used their method to find an optimized, long-acting variant of a venom that blocks this protein and showed that the new molecule powerfully reduces inflammation in mice.

The report on the advance by Lerner and his colleagues was selected as a “Hot Paper” and cover story by the journal Angewandte Chemie.

The use of venoms as therapies may seem paradoxical, since these molecules generally evolved to harm and kill other organisms. But a low dose delivered to the right place can sometimes have highly beneficial effects. The pain-killing drug ziconotide (Prialt®), for example, is derived from one of the venoms used by cone-snails to immobilize their fishy prey. Venoms also are attractive from a drug development perspective because they tend to hit their targets on cells with very high potency and selectivity.

Drug companies would have adapted far more venoms into therapies by now, but the traditional method of determining the biological target of a venom is slow, difficult and expensive. It involves the extraction of relatively large quantities of venom from the animal species in question, followed by purification of the molecules and laborious lab-dish tests to see how they affect cells.

The new method is geared for speed and involves the extraction only of information—with little direct involvement of venomous creatures. To start, the TSRI-led team, including first author Hongkai Zhang, a senior scientist in the Lerner laboratory, consulted animal toxin databases and assembled a list of 589 venoms whose protein sequences have features of interest. They then synthesized the venoms’ genes and inserted them into special viruses that deliver genes into cells.

The aim in this initial, proof-of-principle project was to find venoms that block a potassium ion-channel protein known as Kv1.3. Ion channels allow charged molecules to flow in and out of cells, and are involved in a variety of essential biological functions—which makes them common targets of venoms. Kv1.3 is of special interest to the pharmaceutical industry because it appears to facilitate the proliferation and migration of T-cells that drive inflammatory disorders such as multiple sclerosis. Drugs that block Kv1.3 are already under development.

To screen their library of venoms for those that block Kv1.3, the researchers, including a team of collaborating biologists at the Institute for Advanced Immunochemical Studies at ShanghaiTech University, used a cell-based selection system of a type developed by Lerner, Zhang, and colleagues in 2012. They created a culture of special Kv1.3-containing test cells in which a strong interaction between a venom and a Kv1.3 ion channel would switch on a red fluorescence gene. The researchers distributed the venom-gene-carrying viruses among the cells and used a fast, automated system to select the cells that showed strong fluorescence. Standard molecular biology techniques were then used to identify and quantify the venom genes these cells contained. The researchers repeated this selection process for three rounds to see which venom genes became most abundant in the cells.

In this way, the team soon identified 27 likely Kv1.3-blocking venoms. All but two turned out to be known blockers of the ion channel. Another had been reported in the literature as a suspected potassium-channel blocker, and the last, an uncharacterized scorpion venom called CllTx1, proved in subsequent traditional-method testing—using actual venom extracted from a scorpion—to be a potent Kv1.3 blocker.

The team realized that their selection system could be useful not only for screening libraries of natural venoms but also for screening artificial variants or “analogs” of a given venom to find those with optimal pharmaceutical properties. To demonstrate, they generated about a million analogs of a long-acting protein based on ShK, a sea anemone toxin that blocks Kv1.3, and put the analogs through three rounds of selection to find the best one. The resulting candidate, S1-2, showed a strong effect not only for blocking Kv1.3 but also for reducing inflammation in a standard rodent model.

“This analog appears to be very potent against Kv1.3 and has no off-target effects on closely related ion channels,” said Zhang.

In addition to Lerner and Zhang, co-authors of the paper, “Autocrine-Based Selection of Drugs that Target Ion Channels from Combinatorial Venom Peptide Libraries,” were Mingjuan Du, Xiao Liu, Jingying Sun, Wei Wang, and Xiu Xin of ShanghaiTech University; Lourival D. Possani of the National Autonomous University of Mexico, who purified the scorpion toxin CllTx1 for analysis; and Jia Xie and Kyungmoo Yea of TSRI.

Funding for the research was provided by the JPB Foundation, Zebra Biologics, and ShanghaiTech University.