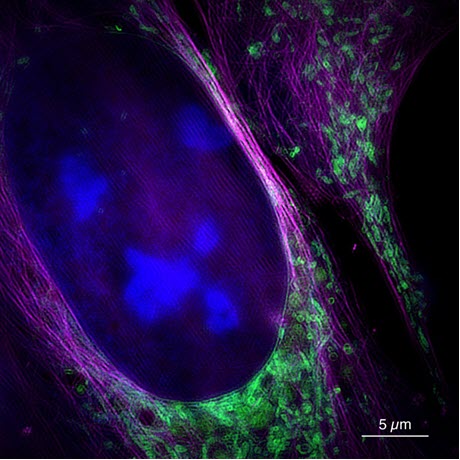 This image taken by the new microscope shows a living bone cancer cell with nucleus (blue), mitochondria (green) and cytoskeleton (magenta).Credit: Bielefeld University/W. HübnerThey can make tiny cell structures visible: cutting-edge light microscopes offer resolutions of a few tenths of a nanometer—in other words, a millionth of a millimeter. Until now, super-resolution microscopes were much slower than conventional methods, because more or finer image data had to be recorded. Together with partners from Jena, researchers from Bielefeld University have now developed the super-resolution SR-SIM process further. The academics show that SR-SIM is also possible in real time and at a very high imaging rate—and thus suitable for observing movements of very small cell particles, for example. Their findings were published Sept. 20 in the journal Nature Communications.

"This is what makes this type of microscopy really useful for applications in biology or medicine. The problem so far is that microscopes offering a sufficiently high resolution cannot display information at the corresponding speed," says professor Dr. Thomas Huser, who heads the Biomolecular Physics Working Group at Bielefeld University. The SR-SIM project is funded by the German Research Foundation (DFG) and the European Union through Marie Sklodowska-Curie Actions.

SR-SIM stands for "super-resolution structured illumination microscopy" and is a fluorescence microscopy procedure. Objects are irradiated with laser light. This light excites special fluorescent molecules in the sample so that they re-emit light at a different wavelength. The microscopic image then shows the re-emitted light. "Unlike other conventional fluorescence microscopy methods, SR-SIM does not illuminate the specimens uniformly, but with a fine, grid-like pattern. This special technology enables much higher resolution," says Huser.

The procedure consists of two steps: the light re-emitted by the specimen is first recorded in several individual images. The finished image is then reconstructed on a computer from these raw data. "The second step, in particular, has cost a great deal of time so far," says Andreas Markwirth, also a member of Bielefeld University's Biomolecular Physics Working Group and lead author of the study. The Bielefeld researchers therefore worked together with professor Dr. Rainer Heintzmann from the Leibniz Institute for Photonic Technologies and the Friedrich Schiller University in Jena to speed up the process. The microscope is now designed to generate the raw data faster. In addition, image reconstruction takes considerably less time thanks to the use of parallel computer processing on modern graphics cards.

For their study, the researchers tested the new method on biological cells and recorded the movements of mitochondria, cell organelles about one micrometre in size. "We have been able to produce about 60 frames per second—a higher frame rate than cinema films. The time between measurement and image is less than 250 milliseconds, so the technology allows real-time recording," says Markwirth.

Up to now, super-resolution methods have often been combined with conventional methods: a conventional fast microscope is used to first find structures. These structures can then be examined in detail using a super-resolution microscope. "However, some structures are so small that they cannot be found with conventional microscopes, for example specific pores in liver cells. Our method is both high-resolution and fast, which enables biologists to explore such structures," says Huser. Another application for the new microscope is the study of viral particles on their way through the cell. "This enables us to understand exactly what happens during infection processes," says Huser. He expects the microscope to be used for such studies at Bielefeld University during the coming year.

Super-resolution microscopes have only been around for about 20 years. In 1873, Ernst Abbe had discovered that the resolution of an optical system for visible light is limited to about 250 nanometers. In recent years, however, several optical methods have been developed to break what has become known as Abbe's diffraction barrier. In 2014, William E. Moerner and Eric Betzig, both from the USA, as well as Stefan Hell from Germany were awarded the Nobel Prize in Chemistry for developing a super-resolution in the range of about 20 to 30 nanometers.