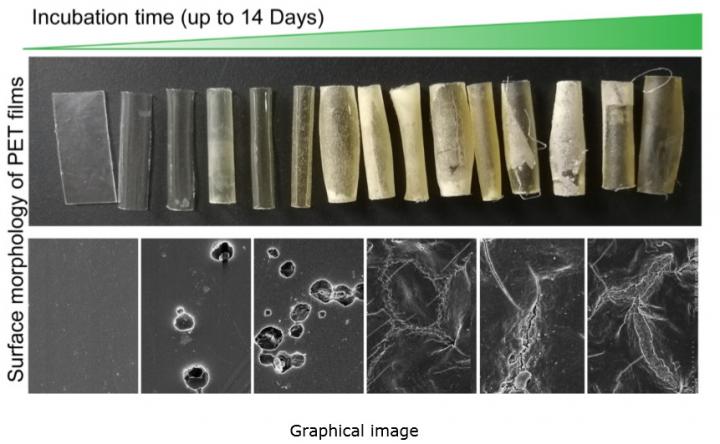 Researchers in China have engineered a microbe that shows promise as the foundation of an efficient way to break down polyethylene terephthalate (PET), a common plastic fiber used to manufacture clothing and disposable consumer products.

The researchers published their findings in Microbial Biotechnology on Apr. 28.

The research team at Qingdao Institute of Bioenergy and Bioprocess Technology (QIBEBT) of the Chinese Academy of Sciences, led by associate professor Yajun Liu, PhD, aimed to create a strain of the bacteria called Clostridium thermocellum (or C. thermocellum) that would degrade PET more efficiently than current industry bio-methods. They had their sights set on C. thermocellum because of its potential to thrive in hot, oxygen-free environments.

"Because C. thermocellum can naturally degrade cellulose efficiently, the C. thermocellum-based strategy is expected to demonstrate great potential for application in the bio-recycling of mixed textile waste containing both cellulose and polyester fractions," Liu said.

The global economy is currently heavily reliant on PET for a range of products. About 70 percent of fibers used in producing clothing contain PET, and most consumer packaging products and drink bottles are produced from PET. Non-recycled PET is produced from fossil fuels, which are in part to blame for human-driven climate change.

Heat-friendly microbes to break down PET faster than their moderate-temperature counterparts, Liu said. First, her team obtained microbes that would thrive above 60 degrees Celsius (140 degrees Fahrenheit)—a temperature ideal for degrading PET into its component compounds. They decided to use C. thermocellum, which in nature are found inside leaf and branch compost piles.

The research team submerged a thin sample of PET in a solution rich with C. thermocellum. The test vials were kept at 60 degrees Celsius for 14 days, at which point about two-thirds of the PET had broken down into what petrochemical engineers call "feedstocks"—the hydrocarbon-based compounds used to create a myriad of plastic and other products.

Existing whole-cell biocatalysis processes to degrade PET are also slower than the process examined in the study, in which about two-thirds of the tested PET sample was broken down in two weeks. Current processes take about six weeks to completely degrade PET. They require energy-intensive inputs such as huge electric motors to agitate the recycling vessels and inject air bubbles to maintain temperature and oxygen levels.

Humankind has produced over 8300 million metric tons of plastics since 1950. Recycling programs have already diverted hundreds of millions of tons of consumer waste away from landfills, according to the US Environmental Protection Agency. But as of 2017, the US Environmental Protection Agency reported that only about 30 percent of plastic waste was recycled, with vast quantities still going into landfills and dumped at sea.

"If further refined and adopted globally, this new process has the potential to save the PET recycling energy time and money, as well as divert a greater percentage of PET away from landfills and oceans," Liu said.