Researchers at The John B. Pierce Laboratory and the Yale School of Medicine have revealed that the ability to vividly imagine the smell of popcorn, freshly baked cookies, and even non-food odors is greater in obese adults. Their research was published in the journal Appetite in August 2015 and was presented at the Annual Meeting of the Society for the Study of Ingestive Behavior (SSIB), the foremost society for research into all aspects of eating and drinking behavior. 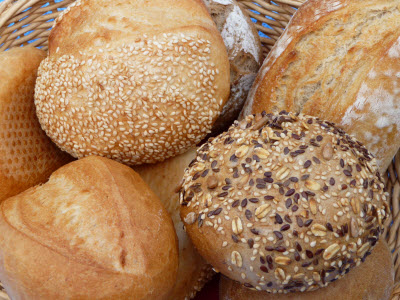 In a recent study, researchers found that a heightened ability to imagine food odors, such as the smell of freshly baked bread, was linked to a higher body weight.Photo credit: 3268zauber, Wikimedia CommonsAll of us can imagine the view of a favorite spot or sing a song to ourselves. Not so with imagining odors. People vary greatly in their ability to imagine the smell of freshly baked bread or the sweet aroma of a bouquet of roses. This raises the possibility that differences in the ability to imagine odors, especially food odors, might be related to the frequency with which food cravings are experienced. According to Kavanagh’s Elaborated Intrusion Theory of Desire, vivid mental imagery is a key factor in stimulating and maintaining food cravings, which can be induced by the thought, smell, and sight of food. Although previous research demonstrate that food cravings occur more often in obese individuals, the relationship between the ability to imagine odors and body weight has not been examined. If individuals with higher body weights report a heightened ability to imagine odors, this may intensify the food craving experience through the creation of more vivid images of flavors and aromas.

Related article: Humans Can Use Smell to Detect Levels of Dietary Fat

In the study, participants completed a series of questionnaires that asked them to imagine both visual and odor cues and then to subsequently rate the vividness of these cues. The researchers found that individuals with a higher body mass index (BMI) reported greater perceived ability to image food and non-food odors.

“These findings highlight the need for a more individualistic approach in identifying factors that may increase risk for weight gain,” said Dr. Barkha Patel, study lead author and Postdoctoral Fellow. They also call for “future work to assess imagery ability directly rather than relying upon self-report measures,” said Dr. Dana Small, senior author and a Professor of Psychiatry at the Yale School of Medicine and Deputy Director at the John B. Pierce Laboratory.