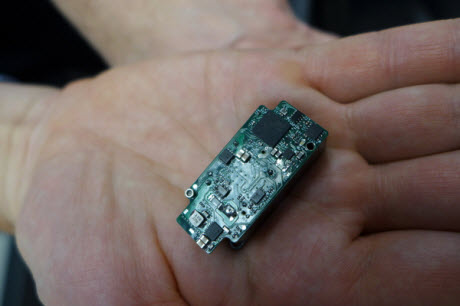 A green laser module, together with control electronics, at the Madison lab of Alfalight, a spinoff from UW-Madison that makes high-power lasers.Photo credit: David TenenbaumThat last use is a target market for Alfalight, a University of Wisconsin-Madison spinoff that set out in 1999 to use patented technology to make lasers for the telecommunications industry. At the time, "a tremendous need was forecast for these high-power, reliable lasers in telecom," says Ron Bechtold, Alfalight's vice president of marketing and sales.

Lasers emit a coherent, single-color beam of light that can travel great distances. But as power output rises, the large electric current that drives the laser can create enough heat to destroy it.

In the 1990s, two professors of electrical and computer engineering at UW-Madison, Luke Mawst and Dan Botez, patented inventions that made great strides in making high-power lasers more efficient and robust. In 1999, with grad student Thomas Earles,they founded Alfalight in Madison with Eric Apfelbach as CEO and licensed their patents from the Wisconsin Alumni Research Foundation. 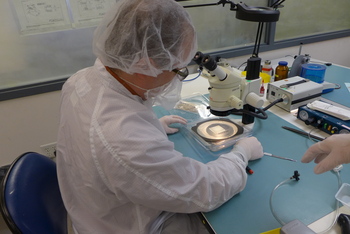 A technician at Alfalight examines laser components under a microscope in a clean room at the company’s factory in Madison.Photo credit: David TenenbaumToday, Alfalight's 16 employees include engineers and physicists. About half of them have degrees from UW-Madison.

The company name derives from one of its key advances: lasers that are aluminum (Al) free. "Not having aluminum in the cavity allows the generation of huge amounts of optical power without damaging the end facet of the laser where the light emerges," says Rob Williamson, director of product and business development.

Aluminum is easily oxidized into a compound that does not conduct electricity, Williamson says. "By eliminating aluminum, you get lower resistance, so more of the current turns into light, which raises efficiency."

It also reduces waste heat, which can otherwise pose "a huge problem," says Williamson, who has a Ph.D. in physics from UW-Madison. The light source in the Alfalight lasers produces as much heat as a similar area at the surface of the sun.

Because the lasers are built with the same techniques used for semiconductors, they are inherently tough and reliable, Williamson says.

Back at the turn of the century, Alfalight's revolutionary laser technology seemed perfectly suited to the telecom market — except that the market vanished while Alfalight readied its production. "As a company, we were left with a good technology and good people, and it was time to think: What market can we serve?" says Williamson.

Starting in 2003, Alfalight began selling to military and industrial markets. In 2009, having survived the Great Recession, it began developing a "non-lethal ocular disruptor," which delivers a blast of green laser light that temporarily overwhelms the retina in the eye.

The disruptor is designed as a non-lethal option for dealing with speeding vehicles in war zones. "The typical scenario is someone racing toward a checkpoint," says Williamson. "Is it a guy who is racing to the hospital because his wife is about to give birth? Or is he delivering a bomb? This is eye-safe, but it sends a very clear signal: 'You better stop or something worse can happen.'"

In March 2013, the company's semiconductor laser fabrication wing and technology were sold to Compound Photonics, a Phoenix firm that makes components for solid-state projectors. Compound Photonics credits the technology it bought from Alfalight as key to a hot new product: a high-definition, efficient projector that could convert a smartphone into a miniature movie projector.

Overall, Alfalight's story is "interesting and typical for startups," says Bechtold. "Originally we had an idea that came out of UW-Madison, and we went after a very exciting market, but it did not work out. So we had investment, talent and technology, and we went looking for a new market." Earles is now working with Alfalight's other two founders on a new laser-related startup.

Speed is one of the key lessons he takes away from Alfalight. "When you are with a startup company, every day matters. The College of Engineering provided access to equipment to do early stage product development work at the university. This was critical to making technical progress until our own facilities were built."

Earles adds that speed can be as critical as money in getting startups on their feet.

Today, Alfalight is in the final running for major contracts for the ocular disruptor and the missile-ignition technology. "The challenge is to grow sustainably, carefully," says Williamson. "You can't grow too fast, and you can't grow too slowly."