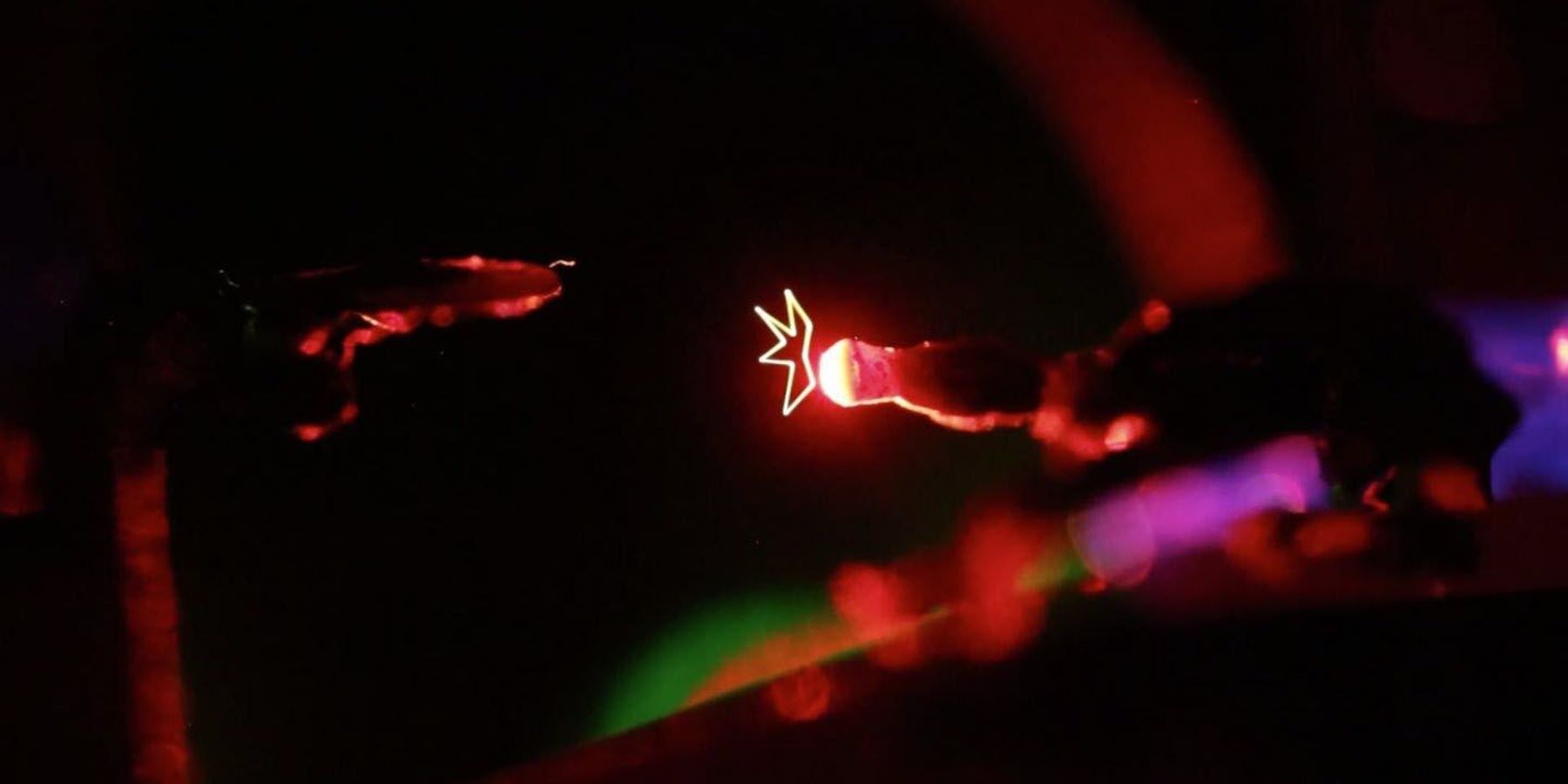 They may be tiny weapons, but Brigham Young University's (BYU's) holography research group has figured out how to create lightsabers—green for Yoda and red for Darth Vader, naturally—with actual luminous beams rising from them.

Inspired by the displays of science fiction, the researchers have also engineered battles between equally small versions of the Starship Enterprise and a Klingon Battle Cruiser that incorporate photon torpedoes launching and striking the enemy vessel that you can see with the naked eye.

"What you're seeing in the scenes we create is real; there is nothing computer generated about them," said lead researcher Dan Smalley, a professor of electrical engineering at BYU. "This is not like the movies, where the lightsabers or the photon torpedoes never really existed in physical space. These are real, and if you look at them from any angle, you will see them existing in that space."

It's the latest work from Smalley and his team of researchers who garnered national and international attention three years ago when they figured out how to draw screenless, free-floating objects in space. Called optical trap displays, they're created by trapping a single particle in the air with a laser beam and then moving that particle around, leaving behind a laser-illuminated path that floats in midair; like a "a 3D printer for light."

The research group's new project, funded by a National Science Foundation CAREER grant, goes to the next level and produces simple animations in thin air. The development paves the way for an immersive experience where people can interact with holographic-like virtual objects that co-exist in their immediate space.

"Most 3D displays require you to look at a screen, but our technology allows us to create images floating in space—and they're physical; not some mirage," Smalley said. "This technology can make it possible to create vibrant animated content that orbits around or crawls on or explodes out of every day physical objects."

To demonstrate that principle, the team has created virtual stick figures that walk in thin air. They were able to demonstrate the interaction between their virtual images and humans by having a student place a finger in the middle of the volumetric display and then film the same stick finger walking along and jumping off that finger.

Smalley and Rogers detail these and other recent breakthroughs in a new paper published in Nature Scientific Reports this month. The work overcomes a limiting factor to optical trap displays: wherein this technology lacks the ability to show virtual images, Smalley and Rogers show it is possible to simulate virtual images by employing a time-varying perspective projection backdrop.

"We can play some fancy tricks with motion parallax and we can make the display look a lot bigger than it physically is," Rogers said. "This methodology would allow us to create the illusion of a much deeper display up to theoretically an infinite size display."

- This press release was originally published on the BYU News website. It has been edited for style