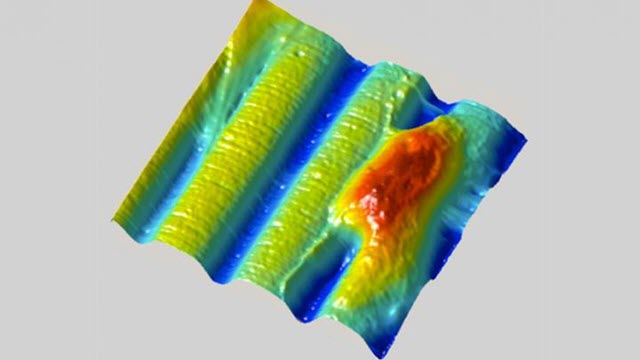 Using a new kind of "shrink ray," UT Austin scientists can alter the surface of a hydrogel pad in real time, creating grooves (blue) and other patterns without disturbing living cells, such as this fibroblast cell (red) that models the behavior of human skin cells. Credit: Jason Shear/University of Texas at Austin

From "Fantastic Voyage" to "Despicable Me," shrink rays have been a science-fiction staple on screen. Now, chemists at The University of Texas at Austin have developed a real shrink ray that can change the size and shape of a block of gel-like material while human or bacterial cells grow on it. This new tool holds promise for biomedical researchers, including those seeking to shed light on how to grow replacement tissues and organs for implants.

"To understand, and in the future engineer, the way that cells respond to the physical properties of their environment, you want to have materials that are dynamically re-shapeable," said Jason B. Shear, professor of chemistry and co-inventor of the new tool.

The work was published online today in the Journal of the American Chemical Society.

The real power of shrinking the material used to grow cells—called the substrate—isn't so much in making it smaller as it is in selectively changing the shape and texture of the surface. By controlling precisely which parts of the interior of the material shrink, the researchers can create specific 3-D features on the surface including bumps, grooves and rings. It's like pinching a rug from below to form peaks and valleys on the surface.

The researchers can also change the location and shapes of surface features as time goes by, for example turning a mountain into a molehill or even a sinkhole, mimicking the dynamic nature of the environment in which cells typically live, grow and move.

The shrink ray is a near-infrared laser that can be focused onto tiny points inside the substrate. The substrate looks and behaves a bit like a block of Jell-O. On the microscopic level, it's made of proteins jumbled and intertwined like a pile of yarn. When the laser strikes a point within the substrate, new chemical bonds are formed between the proteins, drawing them in more tightly, a change that also alters the surface shape as it's tugged on from below. Researchers scan the laser through a series of points within the substrate to create any desired surface contour at any place in relation to targeted cells.

Unlike other methods for altering the substrate under living cells, the UT Austin shrink ray doesn't heat or chemically alter the surface, damage living cells or cause cells to unstick from the surface. And it allows the formation of any 3-D pattern on demand while viewing the growing cells through a microscope.

The UT Austin researchers' immediate plans are to use the tool to investigate fundamental scientific questions surrounding cellular growth and migration, efforts that could enable various future medical applications. For example, the approach may lead to materials and procedures that promote wound healing or nerve regrowth, or assist in growing and successfully implanting replacement tissues, such as skin or heart valves.

"To get tissues to grow in a dish that will be effective once implanted, we need to first understand, then better mimic the environment in which they typically develop in our own bodies," said Shear.

Another potential application would be in basic research on how the topography of a surface affects the formation of dangerous bacterial colonies called biofilms. Microbial biofilms—dense, sticky mats of bacteria that form on medical equipment and can lead to hard-to-treat infections—contribute to hospital-borne infections for up to 1 million people in the United States annually. If scientists can better understand what topographic features prevent biofilms from forming, and how features that change over time may influence the process, they might be able to develop coatings for biomedical devices that block their formation and prevent hard-to-treat infections.