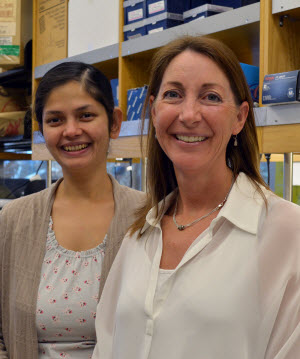 The researchers discovered that during this period, receptors in the female mouse’s nose actually block the signals from male odor molecules from ever reaching the brain. This lack of sensation directly affects mouse behavior.

“This was shocking,” said Lisa Stowers, associate professor and member of the Dorris Neuroscience Center at TSRI and leader of the new study. “The nose was making decisions and acting like an extension of the brain.”

These findings, which point to new avenues for studying senses and behavior, were published June 4, 2015, in the journal Cell.

Researchers have long suspected that this change in behavior is related to hormonal changes in the brain during the reproductive cycle. Hormones produced in the ovaries during estrus and diestrus are known to activate specific neurons in the female brain. Stowers and her team aimed to study those neurons further. Before they investigated the brain, however, the researchers first wanted to rule out any activity in the nose that might be affecting the odor cues.

The researchers investigated a subset of neurons in a special organ in the nose called the vomeronasal organ (VNO), which detects male odors.

Using a technique called calcium imaging, the researchers discovered that these neurons don’t always detect male odors. The neurons have a “gating” mechanism and fail to activate in the presence of a hormone called progesterone, which is produced in the ovaries during diestrus. They found that progesterone acts through receptors on the surface of these sensory neurons, stopping them from transmitting the male odor smell to the brain.

Without these neurons activating, the female mouse can’t perceive male odors that promote behavior. This means ­the choice to perform behavior is being regulated in the nose itself, without thought from the brain.

“I have never heard of anything like this before—in any sensory system,” said Stowers.

Sandeepa Dey, a TSRI research associate and first author of the study, added, “This sort of behavior control is usually done by the brain, not the nose.”

What made the findings even stranger was the fact that no progesterone receptors had ever been detected in VNO neurons before. This prompted the researchers to dig further to figure out what was going on.

First, the researchers wanted to see if progesterone was disabling VNO function altogether.

To test this, the researchers checked the VNO response to predator cues—in this case, the scent of cat urine, which mice instinctually avoid. The researchers found that the subset of VNO neurons that usually respond to cat urine continued to respond normally, even in the presence of progesterone.

This showed that the ability female mice to smell in general was indeed still active during periods of diestrus.

Next, the researchers took a closer look at the signaling process. They discovered that when progesterone is detected by VNO neurons, it changes a signaling molecule that would normally relay the odor to the brain. Because only male odor-specific VNO neurons are susceptible to this change, they are the only ones that switch off in the presence of progesterone.

The reason for this male odor “blindness” is still unclear. Stowers said there is no evidence for the notion that male odors distract females from finding food or shelter. After all, female mice can smell male mice during estrus, and they still survive.

“In the wild, there has to be some reason the female isn’t detecting those cues,” said Stowers.

Stowers said future studies in her lab will focus on whether neurons in other areas of mouse noses—and human noses—are affected by hormone fluctuations and other internal-state changes, such as appetite and stress.

“We think this is just the tip of the iceberg,” Stowers said.

In addition to Stowers and Dey, authors of the study, “Cyclic regulation of sensory perception by a female hormone alters behavior,” were Pablo Chamero the University of Saarland School of Medicine; James K. Pru of Washington State University; Ming-Shan Chien and Hiroaki Matsunami of Duke University Medical Center; Ximena Ibarra-Soria and Darren W. Logan of the Wellcome Trust Sanger Institute; Kathryn R. Spencer of TSRI; and John J. Peluso of the University of Connecticut. For more information on the study, see http://www.cell.com/cell/home.