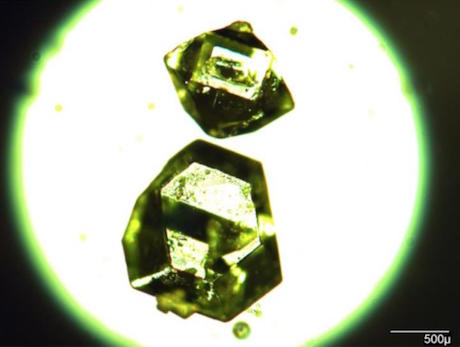 Individual crystals of synthetic zhemchuzhnikovite, prepared by Igor Huskic, McGill University.Image credit: Igor Huskic, Frišcic Research Group, McGill UniversityOne of the hottest new materials is a class of porous solids known as metal-organic frameworks, or MOFs. These man-made materials were introduced in the 1990s, and researchers around the world are working on ways to use them as molecular sponges for applications such as hydrogen storage, carbon sequestration, or photovoltaics.

Now, a surprising discovery by scientists in Canada and Russia reveals that MOFs also exist in nature–albeit in the form of rare minerals found so far only in Siberian coal mines.

The finding, published in the journal Science Advances, "completely changes the normal view of these highly popular materials as solely artificial, 'designer' solids," says senior author Tomislav Frišcic, an associate professor of chemistry at McGill University in Montreal. "This raises the possibility that there might be other, more abundant, MOF minerals out there."

The twisting path to the discovery began six years ago, when Frišcic came across a mention of the minerals stepanovite and zhemchuzhnikovite in a Canadian mineralogy journal. The crystal structure of the minerals, found in Russia between the 1940s and 1960s, hadn't been fully determined. But the Russian mineralogists who discovered them had analyzed their chemical composition and the basic parameters of their structures, using a technique known as X-ray powder diffraction. To Frišcic, those parameters hinted that the minerals could be structurally similar to a type of man-made MOF.

His curiosity piqued, Frišcic began looking for samples of the rare minerals, reaching out to experts, museums and vendors in Russia and elsewhere. After a promising lead with a mining museum in Saint Petersburg failed to pan out, Igor Huskic, a graduate student in the Frišcic research group at McGill turned his attention to synthesizing analogues of the minerals in the lab–and succeeded. But a major journal last year declined to publish the team's work, in part because the original description of the minerals had been reported in a somewhat obscure Russian mineralogical journal.

Then, the McGill chemists caught a break: with the help of a crystallographer colleague in Venezuela, they connected with two prominent Russian mineralogists: Sergey Krivovichev, a professor at Saint Petersburg State University, and Prof. Igor Pekov of Lomonosov Moscow State University.

Krivovichev and Pekov were able to obtain the original samples of the two rare minerals, which had been found decades earlier in a coal mine deep beneath the Siberian permafrost. The Russian experts were also able to determine the crystal structures of the minerals. These findings confirmed the McGill researchers' initial results from their lab synthesis.

Stepanovite and zhemchuzhnikovite have the elaborate, honeycomb-like structure of MOFs, characterized at the molecular level by large voids. The two minerals aren't, however, representative of the hottest varieties of MOFs–those that are being developed for use in hydrogen-fueled cars or to capture waste carbon dioxide.

As a result, Frišcic and his collaborators are now broadening their research to determine if other, more abundant minerals have porous structures that could make them suitable for uses such as hydrogen storage or even drug delivery.

In any event, the discovery of MOF structures in the two rare minerals already is "paradigm-changing" Frišcic says. If scientists had been able to determine those structures in the 1960s, he notes, the development of MOF materials "might have been accelerated by 30 years."