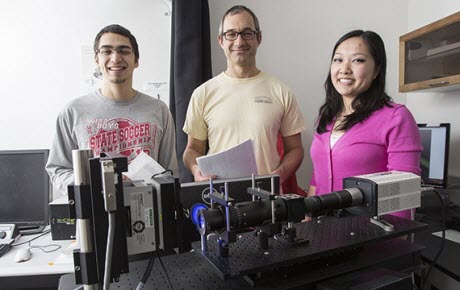 The first- and second-generation RootScopes allow students such as Erin Kast '15 (left) and Stephanie Wey '16 to conduct plant biology experiments they would not have been able to otherwise in Nick Kaplinksy's (center) lab.Photo courtesy of Swarthmore CollegeThe Swarthmore College associate professor of biology needed a microscope to heat shock and image transgenic plants, but building one from new parts would have cost hundreds of thousands of dollars. Instead, he logged on to eBay, finding the hardware he needed to build his custom RootScope for under $10,000.

“When you’re equipping a lab, you’re willing to take on a little risk to stretch your dollars,” says Kaplinsky, whose creative solution was chronicled in Biotechniques.

The first- and second-generation RootScopes allow students to conduct experiments they would not have been able to otherwise, yielding a publication Kaplinsky co-authored with students and staff from his lab as part of a long-term, ongoing study.

“The cool thing about the RootScope is that I can observe over 100 seedlings at once and see where and how much the proteins are being expressed due to heat shock,” says Stephanie Wey ’16, a biology major from Westmont, Ill.

“Science is as much about building stuff — microscopes, theories, networks, or explanations — as it is about discovering stuff,” says the biology and religion major from Wausau, Wisc. “That's a lesson anyone can take from what Nick’s done.”

Kaplinsky himself credits the RootScope to “happenstance.” A long-time eBay user, he began by looking for parts for his microscopes. Then he realized the microscope parts were coming from next-generation sequencers that were worth hundreds of thousands before advances in technology rendered them obsolete.

Kaplinsky visited one seller, finding himself in a warehouse with stacks of the sequencers shrink-wrapped on wooden pallets. Sticker price of $1,200. Jackpot.

“Buying used parts gives you the freedom to tinker and play around without spending too much money,” he says. “But the project was still a pipe dream until we got it working.”

To take it from “Buy it Now” to built, Kaplinsky used a 3-D printer from Information Technology Services and sought help from colleagues such as professors Catherine Crouch and Carl Grossman, machinist Steve Palmer, and instrument technician Paul Jacobs of the Department of Physics & Astronomy.

“The hardest part of the process was getting the software to work with all of the components,” says Kaplinsky, who will look to students to do more of the coding next time. “It became a real interdisciplinary effort.”

Right from the start, the RootScope sparked intrigue and fostered collaboration.

“Nick’s instructions are ‘Go play with the microscope,’ to explore what we can do with it,” says Maria Anleu ’15, a biology and Asian studies major from Guatemala City, Guatemala. “It makes me feel really involved in the lab and the research we do, as I’m contributing to discovering the huge potential of this system.”

Adds Azucena Lucatero ’16, a biology and Asian studies major from Ontario, Calif.: “Now that I have watched my professors literally build their experimental setup, I’m continually impressed and excited by how much creative license is possible at every step of the scientific process.”

Seeking to spread that excitement beyond Swarthmore, Kaplinsky chronicled his experience of turning the sequencer into the RootScope on his blog. Although he has a working microscope, Kaplinsky hasn’t stopped dreaming.

“If I could get my hands on 96 of these sequencers, to have a rack of 96 of the microscopes all performing my genetic screen all at once, that would be the dream,” he tells Biotechniques. “It would be very expensive, but it would look hella-cool.”