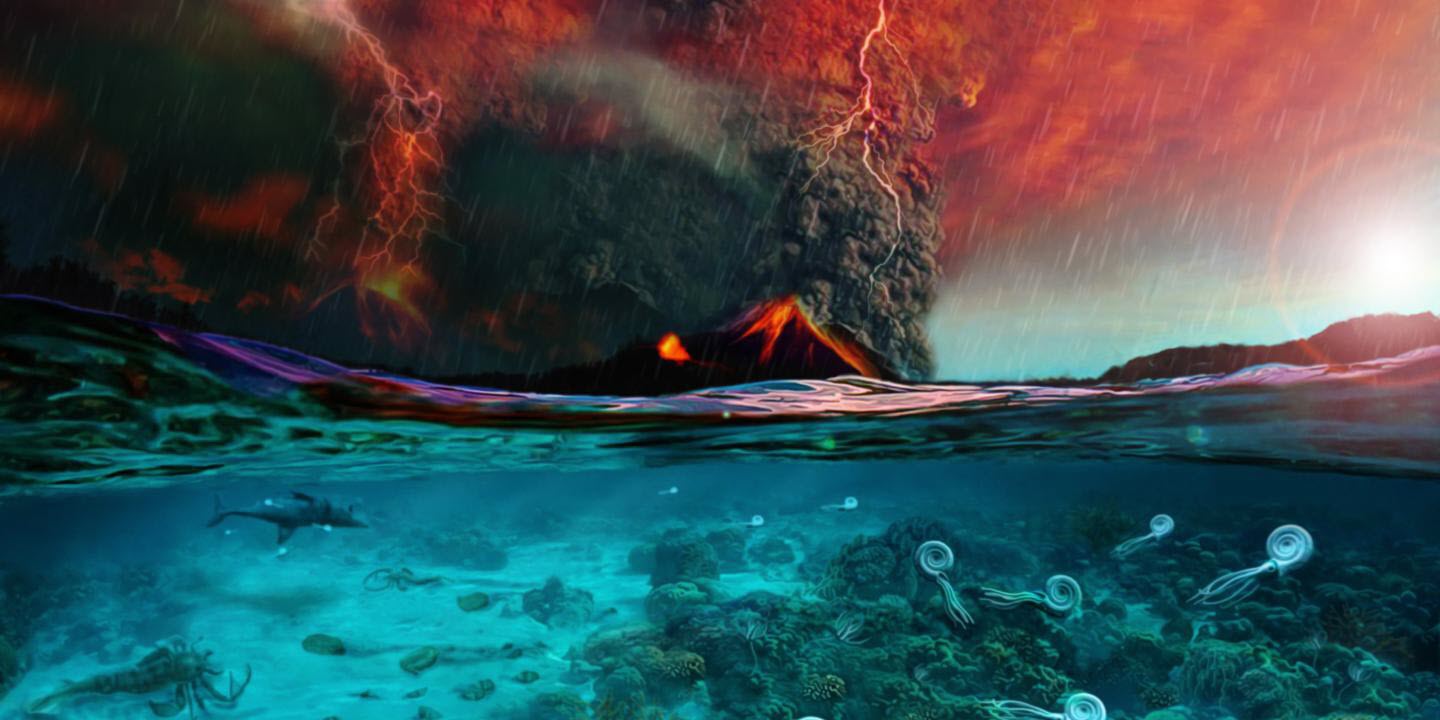 Illustration depicting the onset of the Permian-Triassic mass extinction based on findings of Jurikova et al. (2020). Ocean acidification and vanishing marine life in the surface ocean caused by a large release of volcanic CO2 from Siberian Traps. Illustrated by: Dawid Adam Iurino.
(PaleoFactory, Sapienza University of Rome) for Jurikova et al. (2020)

Earth's history knows catastrophes which are unimaginable for humans. For example, around 66 million years ago an asteroid impact marked the end of the dinosaur era. Long before however, 252 million years ago at the boundary between the Permian and Triassic epochs, Earth witnessed a far more extreme mass extinction event that extinguished about three-quarters of all species on land and some 95 percent of all species in the ocean. Volcanic activity on an enormous scale in today's Siberia has long been debated as a likely trigger of the Permian-Triassic mass extinction, but the exact sequence of events that led to the extinction remained highly controversial. Now, a team of researchers from GEOMAR Helmholtz Centre for Ocean Research Kiel, in collaboration with the Helmholtz Centre Potsdam GFZ German Research Centre for Geosciences and Italian and Canadian universities, provides for the first time a conclusive reconstruction of the key events that led to the mega-catastrophe. Their research also draws bleak lessons for the future. They report about their discoveries in the journal Nature Geoscience.

The international team led by Hana Jurikova studied isotopes of the element boron in the calcareous shells of fossil brachiopods—clam-like organisms—and with it determined the rate of ocean acidification over the Permian-Triassic boundary. Because the ocean pH and atmospheric carbon dioxide (CO2) are closely coupled, the team was able to reconstruct changes in atmospheric CO2 at the onset of the extinction from boron and carbon isotopes. They then used an innovative geochemical model to study the impact of the CO2 injection on the environment. Their findings showed that volcanic eruptions, from the then active flood basalt province "Siberian Traps," released immense amounts of CO2 into the atmosphere. This large CO2 release lasted several millennia and led to a strong greenhouse effect on the late Permian world, causing extreme warming and acidification of the ocean. Dramatic changes in chemical weathering on land altered productivity and nutrient cycling in the ocean, and ultimately led to vast de-oxygenation of the ocean. The resulting multiple environmental stressors combined to wipe out a wide variety of animal and plant groups. 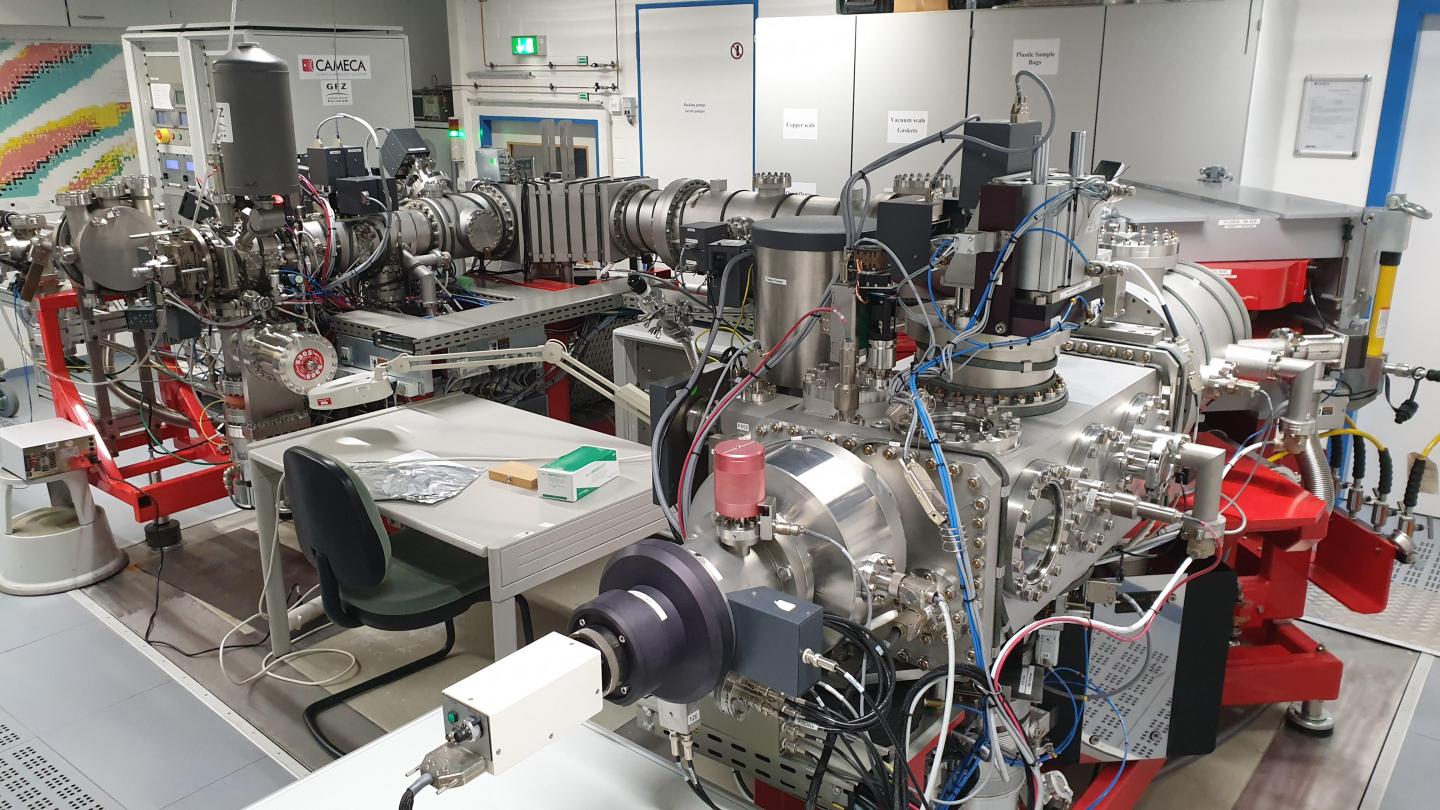 "We are dealing with a cascading catastrophe in which the rise of CO2 in the atmosphere set off a chain of events that successively extinguished almost all life in the seas," Jurikova says.

She adds: "Ancient volcanic eruptions of this kind are not directly comparable to anthropogenic carbon emissions, and in fact all modern fossil fuel reserves are far too insufficient to release as much CO2 over hundreds of years, let alone thousands of years as was released 252 million years ago. But it is astonishing that humanity's CO2 emission rate is currently 14 times higher than the annual emission rate at the time that marked the greatest biological catastrophe in Earth's history."

A large part of the work was done by the researcher at GEOMAR in Kiel, but she later joined the GFZ (Section 4.3) in Potsdam, and the "icing on the cake" for her was the results from a collaboration with the SIMS laboratory led by Michael Wiedenbeck at the GFZ (Section 3.1). Using the state-of-the-art large-geometry secondary ion mass spectrometer (SIMS), the isotopic composition of the shells could be measured directly on the specimens at the micrometer-scale. This made it possible to determine the boron isotopic composition even in the smallest fragments of brachiopod shells. Depending on the degree of acidification of the seas, the calcareous shells of the organisms living in them differ ever so slightly in their chemical composition. In this way, the pH value of long vanished oceans could be determined in the remains of the shells preserved as fossils in the rock record.