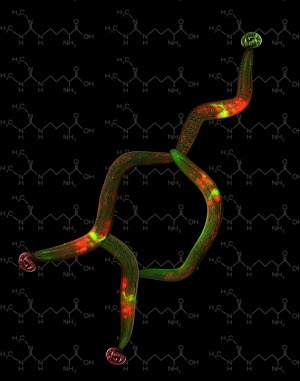 They were studying how a worm called C. elegans would react when different genes were deleted from its DNA. One particularly interesting deletion resulted in nematodes with a heightened sense of smell: They backed away from repulsive odors unusually fast.

The lead researchers, Denise Ferkey and Michael Yu, took note; they had seen this behavior before.

In prior, unrelated experiments, the same species of worm had become hypersensitive to smell when its nerve cells experienced problems with dopamine signaling, a cellular process that helps control how readily cells can communicate with one another.

The researchers wondered: Was a similar issue at play again?

That question — and that curiosity — led the scientists on a multi-year research project that could one day open new treatment avenues for diseases ranging from schizophrenia to Parkinson’s.

On Nov. 10 in the journal Science Signaling, Ferkey and Yu’s team report that the mutant worms they were studying had altered dopamine signaling because the animals were missing the gene for an enzyme called PRMT-5, which facilitates another important cellular process — protein arginine methylation.

When researchers took the gene away, the worms stopped making PRMT-5; protein arginine methylation decreased; and dopamine signaling declined as a result. 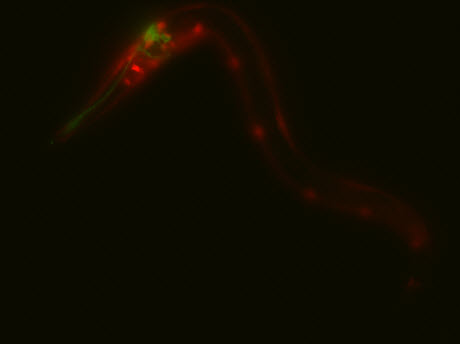 This microscope image shows the worm species C. elegans. In the images, certain neurons involved in dopamine signaling are shown in red, while certain other neurons, including those involved in sensing smell, are shown in green. Images with a gray background incorporate Nomarski imaging, which enables viewers to better see the shape and contour of the worms.Image credit: Jordan WoodThe scientists also discovered that the same mechanism — arginine methylation — regulates dopamine signaling in human cells.

“We’re excited about this finding because dopamine signaling is involved in such a diversity of biological processes,” says Ferkey, PhD, an associate professor of biological sciences in the UB College of Arts and Sciences. “We also know that it’s linked to Parkinson’s disease, schizophrenia and drug addiction. Our research opens up possibilities for a whole new class of drugs.”

“One of the interesting things we saw in our study was that dopamine signaling became weaker, but it didn’t turn it off completely,” says Yu, PhD, UB associate professor of biological sciences. “A lot of treatments take an all-or-nothing approach: You either have something or you don’t. But with arginine methylation, we may be able to take a softer approach and fine-tune how powerful the signaling is.”

“From the standpoint of pharmaceuticals, modulation is good because it could reduce side effects,” Ferkey adds. “The body may respond better to fine-tuning than to a sledgehammer.”

A versatile avenue for therapeutics

Dopamine is a neurotransmitter — a chemical that plays an important role in how nerve cells respond to stimuli and communicate with one another.

Produced naturally in the brain, dopamine has become a neuroscience rock star: It’s involved in how the mind registers rewards, and media have reported on the chemical’s connection to addiction, gambling and pleasure. Dopamine is also involved in many other biological processes, including an array of diseases.

One way dopamine influences intercellular communication is by binding to receptors found in nerve cells, an action that can influence how likely these cells are to “fire” and communicate messages to other cells.

Ferkey and Yu’s team traced how the PRMT-5 enzyme affects this process. In doing so, they show how versatile their discovery could be in pursuing treatments for diverse diseases.

PRMT stands for “protein arginine methyltransferase,” and PRMT enzymes facilitate the chemical process of arginine methylation, the fastening of a methyl group (made from one carbon and three hydrogen atoms) to proteins inside cells.

Related article: A Wriggly Solution to a First World Problem

Arginine methylation is crucial to many bodily functions, but until now, scientists did not know it mattered in dopamine signaling, said Yu, whose research focuses on PRMTs.

This influences the sensitivity of the nerve cells, changing how likely they are to communicate important messages to other cells.

This held true in both worm cells and human cells, which shows that the role of PRMTs in dopamine signaling has been conserved through evolution — a quality that often points to a particularly useful adaptation.

The dopamine receptors the researchers studied belong to a family called G protein-coupled receptors (GPCRs), and the newly discovered PRMT-5 mechanism may be active on hundreds of these receptors — creating huge potential for new therapeutics. GPCRs play a role in diseases from cancer to chronic heart failure, Ferkey says.

A win for basic science

A side effect of losing PRMT-5 in C. elegans is a heightened sense of smell: In the worms, dopamine signaling acts as a brake or check on the sensory system’s response to odorants. So when you remove PRMT-5 and diminish dopamine signaling, the brake comes off and the mutant worms react more strongly to odor, Ferkey says.

“Our study is a big win for basic science research,” she says. “We didn’t set out to identify a new means of regulating dopamine signaling. We saw this very curious phenotype — this mutant worm with this heightened sense of smell — and remembered it from previous experiments dealing with something totally different.”

“Many of science’s great findings are serendipitous,” Yu adds. “Our story shows why it’s so important for society to support basic science research.”