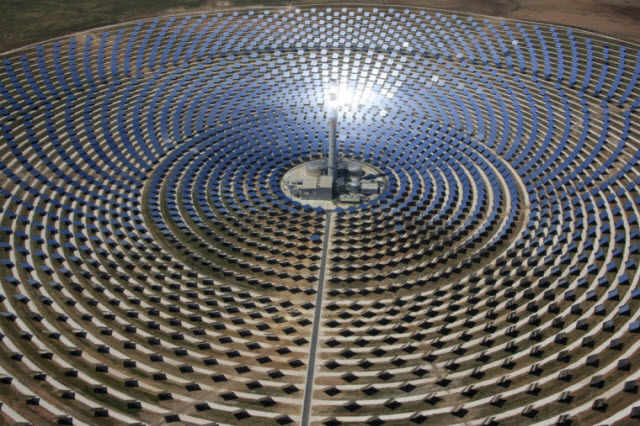 Heliostat mirrors can concentrate so much energy on a central solar tower that they set birds on fire. In green bacteria as well, light harvesting antenna complexes can concentrate so much light that they burn out reaction centers. Scientists at Washington University in St. Louis have just discovered how they avoid overload.Photo courtesy of Washington University in St. Louis

Scientists at Washington University in St. Louis have discovered a previously unknown strategy photosynthetic organisms use to protect themselves from the dangers of excessive light, providing further insight into photosynthesis and opening up new avenues for engineering this process, which underlies the global food chain.

Related Article: On the Road to Artificial Photosynthesis

The photosynthetic bacterium Chlorobaculum tepidum thrives in the oxygen-free depths or sediments of lakes. In fact, oxygen can poison it by damaging its sensitive reaction center, which converts the energy of light into chemical energy. To survive, the bacterium must have a finely tuned response to light and oxygen that can be turned up or down as needed. 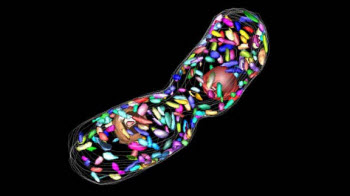 A dividing Chlorobaculum tepidum with some of its light-harvesting antenna complexes rendered in color.Image Courtesy of Martin Hohmann-Marriott and Robert BlankenshipThis “photosynthetic volume control” allows the bacterium to survive exposure to oxygen, when light could otherwise harm it.

Robert Blankenship, the Lucille P. Markey Distinguished Professor of Arts and Sciences in Biology and Chemistry, whose research team discovered this novel mechanism, thinks that the new insight could help scientists engineer other green organisms to also tolerate oxygen or provide them with additional ways to dissipate unwanted energy.

The findings are reported in the June 20 issue of the Proceedings of the National Academy of Sciences.

Chlorobaculum is adapted to life in the smelly sulfurous ooze of lake-bottom muds where there is little or no oxygen. If it is exposed to oxygen, the bacterium must have a way to shut off photosynthesis by shunting energy away from its reaction center—the heart of photosynthesis where light energy is converted into molecular energy the cell can use.

The amount of energy hitting the reaction center is controlled by extensive “antenna complexes.” These huge networks of protein and chlorophyll funnel energy into the reaction center, like the large arrays of mirrors that concentrate sunlight at a single point in solar towers.

Plants and other photosynthetic organisms typically rely on extra pigments, such as orange carotenoids, to safely absorb and disperse excess energy, thus acting as a sort of molecular sunscreen. This process is called quenching, and, for more than 20 years, scientists had known that the antenna protein FMO within Chlorobaculum could quench, but that it did so without carotenoids or other known protections. They had no idea how it did this.

Related Article: Lignin from Plants Boosts the Effectiveness of Sunscreen

Researchers proposed that rare modifications of amino acids, the building blocks of proteins, might account for FMO’s quenching ability, but had no way of testing this idea.

“It was really a mystery for a long time,” Blankenship said. “We knew it was a big effect. But there was no way we could figure out how it actually worked.”

The mystery remained unsolved until advances in protein mass spectrometry allowed Gregory Orf, a postdoctoral scholar then in the Blankenship lab and now at Arizona State University, to accurately probe the amino acids deep inside the FMO protein.

There, Orf found not the complex, modified amino acids that scientists suspected would account for quenching, but simply two normal cysteines, one of the 20 standard amino acids.

“I noticed that the only amino acids that had any significant difference in reactivity with and without oxygen were these two cysteines, and they’re the only two cysteines in the whole protein,” Orf said.

The cysteines were next to the two chlorophylls closest to the reaction center, a good location for a photosynthetic on/off switch. 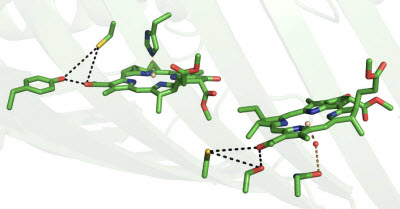 The cysteines (yellow) quench photosynthesis by stealing electrons from neighboring chlorophylls (big green molecules).Image credit: Orf et al.The researchers found that if they modified these cysteines so that they were unable to respond to oxygen, or substituted less-active amino acids for them, the quenching effect disappeared. Each cysteine contributed its own effect, but they also acted cooperatively, producing a quenching response greater than the sum of its parts.

“We think that when oxygen is around, cysteine can steal an excited electron from its nearby chlorophyll to release that light energy in the form of harmless heat,” Orf said.

This cysteine-based quenching mechanism, which is new to the field, may offer a way to elegantly engineer oxygen tolerance into other photosynthetic organisms, such as biofuel-producing algae, or into “artificial” photosynthetic systems.

“That’s the importance of this work, I think–other than trying to understand how this one photosynthetic bacterium works,” Blankenship said.

“This fairly simple mechanism for turning energy transfer on and off could be engineered into several different systems.”