PROVIDENCE, RI — Brown University — A new study of airflow patterns inside a car's passenger cabin offers some suggestions for potentially reducing the risk of COVID-19 transmission while sharing rides with others.

The study, by a team of Brown University researchers, used computer models to simulate the airflow inside a compact car with various combinations of windows open or closed. The simulations showed that opening windows—the more windows the better—created airflow patterns that dramatically reduced the concentration of airborne particles exchanged between a driver and a single passenger. Blasting the car's ventilation system didn't circulate air nearly as well as a few open windows, the researchers found.

"Driving around with the windows up and the air conditioning or heat on is definitely the worst scenario, according to our computer simulations," said Asimanshu Das, a graduate student in Brown's School of Engineering and co-lead author of the research. "The best scenario we found was having all four windows open, but even having one or two open was far better than having them all closed." 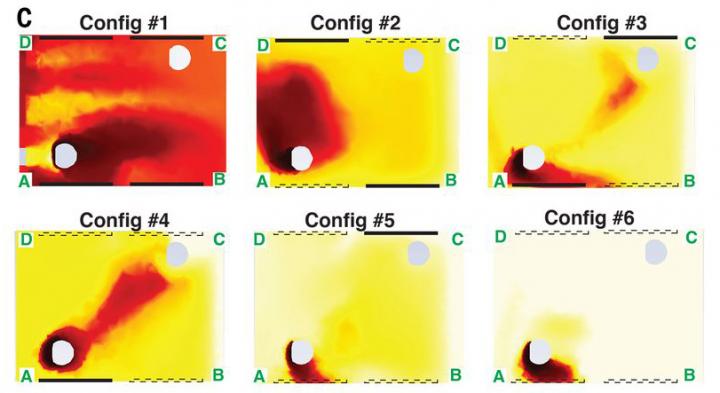 A new study looks at how airflow patterns inside the passenger cabin of a car might affect the transmission of SARS-CoV-2 and other airborne pathogens. Using computer simulations, the study looked at the risk of aerosol particles being shared between a driver and a passenger in different window configurations. Redder shades indicate more particles. Risk was shown to be higher with windows closed (top left), and decreasing with each window opened. The best case was having all windows open (bottom right).
Breuer lab / Brown University

Das co-led the research with Varghese Mathai, a former postdoctoral researcher at Brown who is now an assistant professor of physics at the University of Massachusetts, Amherst. The study is published in the journal Science Advances.

The researchers stress that there's no way to eliminate risk completely—and, of course, current guidance from the US Centers for Disease Control (CDC) notes that postponing travel and staying home is the best way to protect personal and community health. The goal of the study was simply to study how changes in airflow inside a car may worsen or reduce risk of pathogen transmission.

The computer models used in the study simulated a car, loosely based on a Toyota Prius, with two people inside—a driver and a passenger sitting in the back seat on the opposite side from the driver. The researchers chose that seating arrangement because it maximizes the physical distance between the two people (though still less than the six feet recommended by the CDC). The models simulated airflow around and inside a car moving at 50 miles per hour, as well as the movement and concentration of aerosols coming from both driver and passenger. Aerosols are tiny particles that can linger in the air for extended periods of time. They are thought to be one way in which the SARS-CoV-2 virus is transmitted, particularly in enclosed spaces.

Part of the reason that opening windows is better in terms of aerosol transmission is because it increases the number of air changes per hour (ACH) inside the car, which helps to reduce the overall concentration of aerosols. But ACH was only part of the story, the researchers say. The study showed that different combinations of open windows created different air currents inside the car that could either increase or decrease exposure to remaining aerosols.

Because of the way air flows across the outside of the car, air pressure near the rear windows tends to be higher than pressure at the front windows. As a result, air tends to enter the car through the back windows and exit through the front windows. With all the windows open, this tendency creates two more-or-less independent flows on either side of the cabin. Since the occupants in the simulations were sitting on opposite sides of the cabin, very few particles end up being transferred between the two. The driver in this scenario is at slightly higher risk than the passenger because the average airflow in the car goes from back to front, but both occupants experience a dramatically lower transfer of particles compared to any other scenario.

The simulations for scenarios in which some but not all windows are down yielded some possibly counterintuitive results. For example, one might expect that opening windows directly beside each occupant might be the simplest way to reduce exposure. The simulations found that while this configuration is better than no windows down at all, it carries a higher exposure risk compared to putting down the window opposite each occupant. 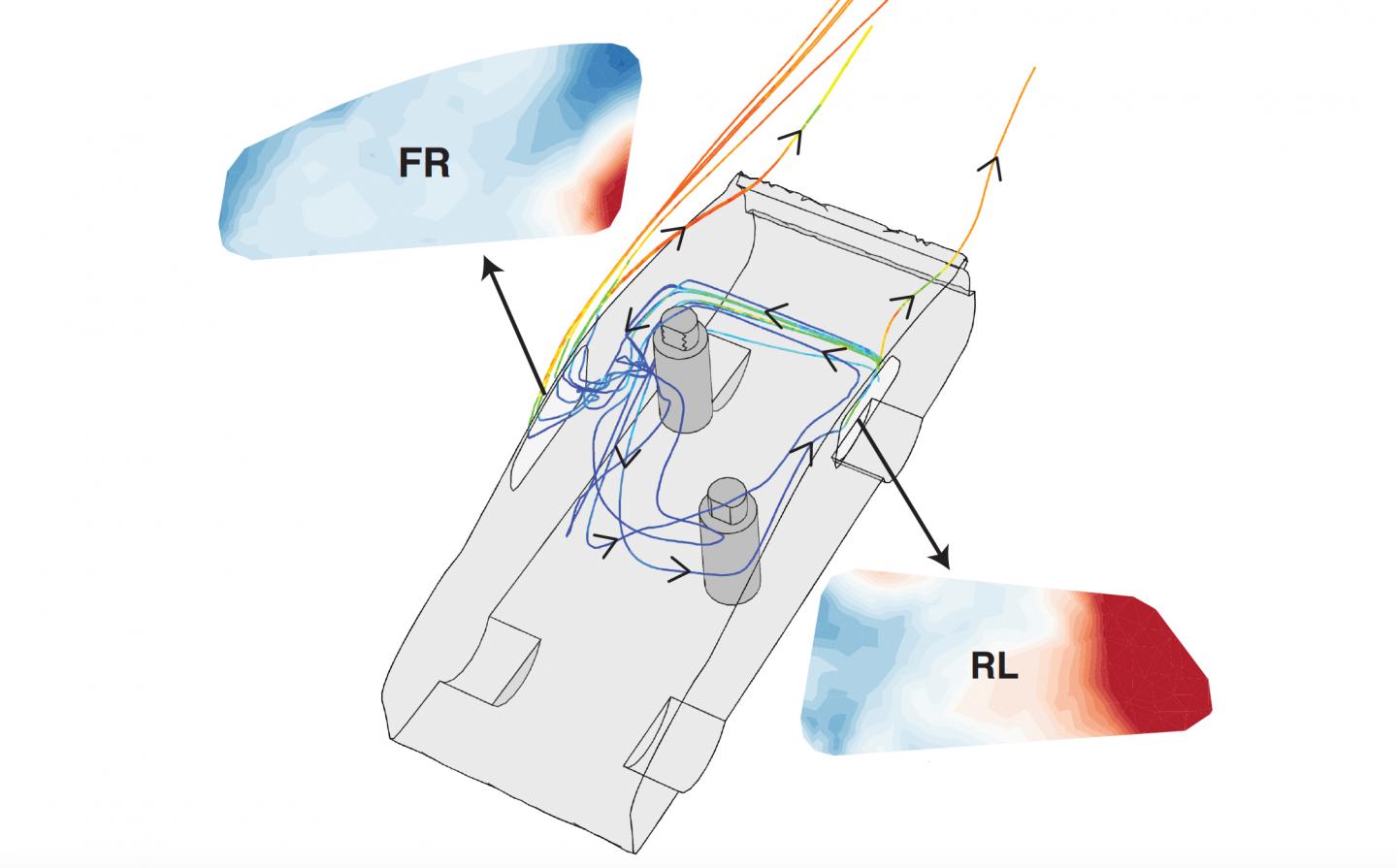 A study published Dec. 4 in Science Advances looks at how airflow patterns inside the passenger cabin of a car might affect the transmission of SARS-CoV-2 and other airborne pathogens. The simulations produced some potentially counterintuitive findings. For example, one might expect that opening windows directly beside each occupant might be the simplest way to reduce exposure. The simulations found that while this configuration is better than no windows down at all, it carries a higher exposure risk compared to putting down the window opposite each occupant. "When the windows opposite the occupants are open, you get a flow that enters the car behind the driver, sweeps across the cabin behind the passenger and then goes out the passenger-side front window," said Kenny Breuer, a professor of engineering at Brown and a senior author of the research. "That pattern helps to reduce cross-contamination between the driver and passenger."
Breuer lab / Brown University

"When the windows opposite the occupants are open, you get a flow that enters the car behind the driver, sweeps across the cabin behind the passenger and then goes out the passenger-side front window," said Kenny Breuer, a professor of engineering at Brown and a senior author of the research. "That pattern helps to reduce cross-contamination between the driver and passenger."

It's important to note, the researchers say, that airflow adjustments are no substitute for mask-wearing by both occupants when inside a car. And the findings are limited to potential exposure to lingering aerosols that may contain pathogens. The study did not model larger respiratory droplets or the risk of actually becoming infected by the virus.

Still, the researchers say the study provides valuable new insights into air circulation patterns inside a car's passenger compartment—something that had received little attention before now.

"This is the first study we're aware of that really looked at the microclimate inside a car," Breuer said. "There had been some studies that looked at how much external pollution gets into a car, or how long cigarette smoke lingers in a car. But this is the first time anyone has looked at airflow patterns in detail."

The research grew out of a COVID-19 research task force established at Brown to gather expertise from across the university to address widely varying aspects of the pandemic. Jeffrey Bailey, an associate professor of pathology and laboratory medicine and a coauthor of the airflow study, leads the group. Bailey was impressed with how quickly the research came together, with Mathai suggesting the use of computer simulations that could be done while laboratory research at Brown was paused for the pandemic.

"This is really a great example of how different disciplines can come together quickly and produce valuable findings," Bailey said. "I talked to Kenny briefly about this idea, and within three or four days his team was already doing some preliminary testing. That's one of the great things about being at a place like Brown, where people are eager to collaborate and work across disciplines."

- This press release was originally published on the Brown University news website. It has been edited for style and length