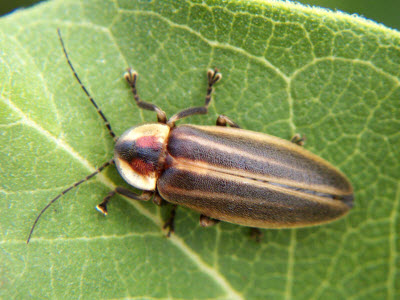 Scientists shed light on what determines the color of a firefly's glow.Photo credit: Bruce Marlin, Wikimedia CommonsThe glow of fireflies at dusk is a welcome sign of summer. The same enzyme that helps give these familiar bugs their characteristic flash of yellow, yields red light in acidic conditions. Similar enzymes are responsible for red and green lights in other beetles. Despite years of study, however, scientists still don't know the molecular details of how the enzyme works. Now, in the American Chemical Society journal Biochemistry, one team reports new insights into this mystery.

Most people are familiar with the flash of fireflies. But perhaps less well known, but just as intriguing, are the displays of click beetles and railroad worms, which are a type of beetle larva. At night, two small dots on click beetles' backs glow like a pair of tiny green eyes peering in the dark. Railroad, or glow worms, exhibit a more complex pattern of both green and red lights. Taking advantage of this natural signaling, scientists have harnessed beetles' bioluminescence to help them see when certain genes are expressed, for example. But the structural and mechanistic factors contributing to beetles' glow have remained elusive. Vadim R. Viviani and colleagues wanted to gain a better understanding of these phenomena.

The researchers used modeling, mutations and spectral and kinetic studies to probe how changes to an enzyme called luciferase affect what color is emitted. Mutations to two particular parts of the enzyme produced a red glow. These parts display opposite charges, which attract each other and keep a "gate" closed where the light-emitting compound is generated. Under normal conditions, the enzyme active site remains closed restricting the entrance of water, which favors green light emission. But mutations and other alterations that break this attraction open the gate and allow water in. This relaxes the active site, resulting in the emission of light with lower energy in the red region.

The authors acknowledge funding from the São Paulo Research Foundation (FAPESP) and the National Council for Scientific and Technological Development of Brazil (CNPq).