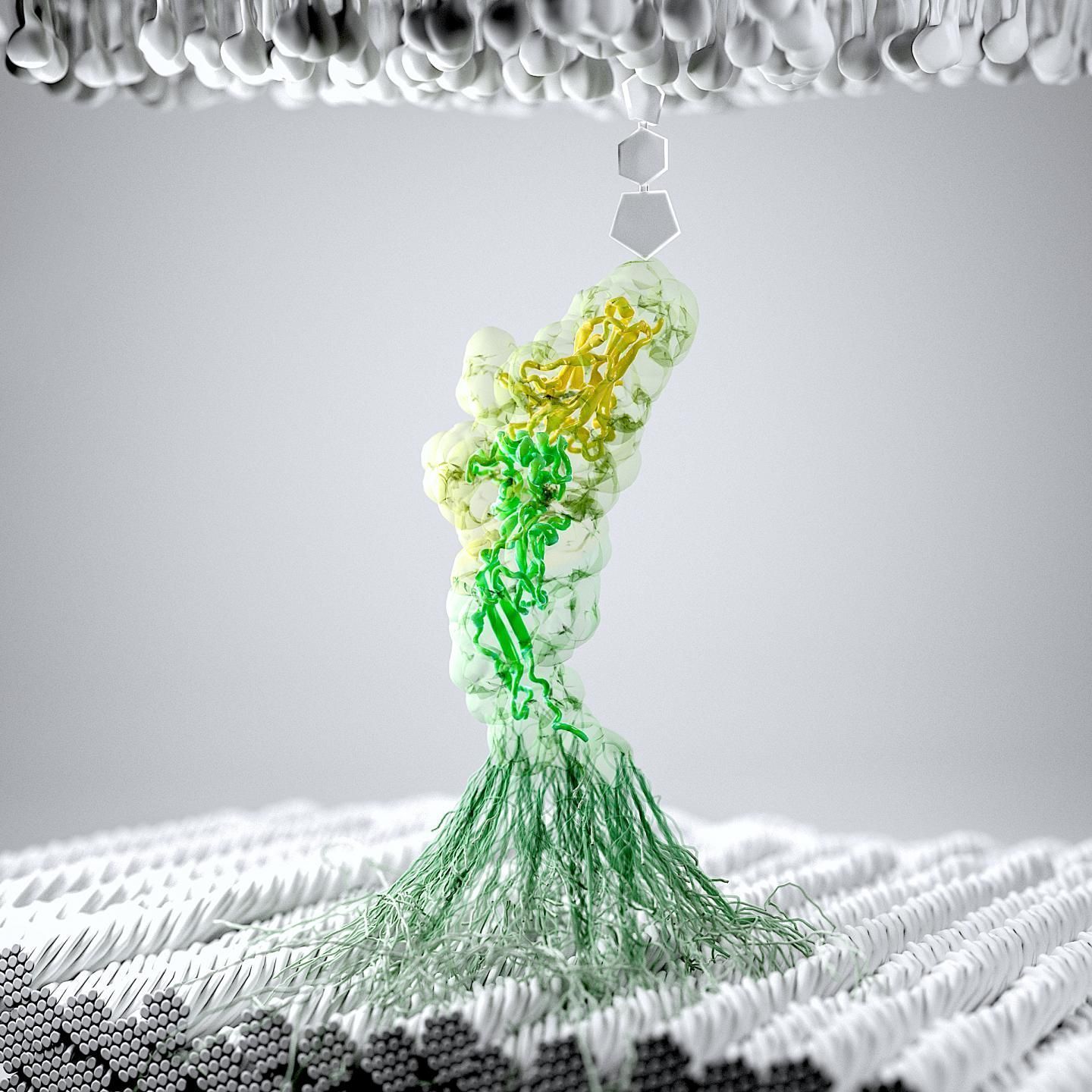 Depiction of a gut bacteria attached to cellulose fibers through adhesion proteins on the bacterial surface. Cohesin (yellow) and Dockerin (green) assemble into a protein complex in two possible configurations, referred to as dual binding modes. The complex is activated by mechanical tension, which strengthens it and facilitates bacterial adhesion to fibers under shear flow.
University of Basel, Department of Chemistry

Researchers have revealed a new molecular mechanism by which bacteria adhere to cellulose fibers in the human gut. Thanks to two different binding modes, they can withstand the shear forces in the body. Scientists of the University of Basel and ETH Zurich published their results in the journal Nature Communications.

Cellulose is a major building block of plant cell walls, consisting of molecules linked together into solid fibers. For humans, cellulose is indigestible, and the majority of gut bacteria lack the enzymes required to break down cellulose.

However, recently genetic material from the cellulose-degrading bacterium R. champanellensis was detected in human gut samples. Bacterial colonization of the intestine is essential for human physiology, and understanding how gut bacteria adhere to cellulose broadens our knowledge of the microbiome and its relationship to human health.

The bacterium under investigation uses an intricate network of scaffold proteins and enzymes on the outer cell wall, referred to as a cellulosome network, to attach to and degrade cellulose fibers. These cellulosome networks are held together by families of interacting proteins.

Of particular interest is the cohesin-dockerin interaction responsible for anchoring the cellulosome network to the cell wall. This interaction needs to withstand shear forces in the body to adhere to fiber. This vital feature motivated the researchers to investigate in more detail how the anchoring complex responds to mechanical forces.

By using a combination of single-molecule atomic force microscopy, single-molecule fluorescence and molecular dynamics simulations, Professor Michael Nash from the University of Basel and ETH Zurich along with collaborators from LMU Munich and Auburn University studied how the complex resists external force.

They were able to show that the complex exhibits a rare behavior called dual binding mode, where the proteins form a complex in two distinct ways. The researchers found that the two binding modes have very different mechanical properties, with one breaking at low forces of around 200 piconewtons and the other exhibiting a much higher stability breaking only at 600 piconewtons of force.

Further analysis showed that the protein complex displays a behavior called a "catch bond," meaning that the protein interaction becomes stronger as force is ramped up. The dynamics of this interaction are believed to allow the bacteria to adhere to cellulose under shear stress and release the complex in response to new substrates or to explore new environments.

"We clearly observe the dual binding modes, but can only speculate on their biological significance. We think the bacteria might control the binding mode preference by modifying the proteins. This would allow switching from a low to high adhesion state depending on the environment," Professor Nash explains.

By shedding light on this natural adhesion mechanism, these findings set the stage for the development of artificial molecular mechanisms that exhibit similar behavior but bind to disease targets. Such materials could have applications in bio-based medical superglues or shear-enhanced binding of therapeutic nanoparticles inside the body. "For now, we are excited to return to the laboratory and see what sticks," says Nash.