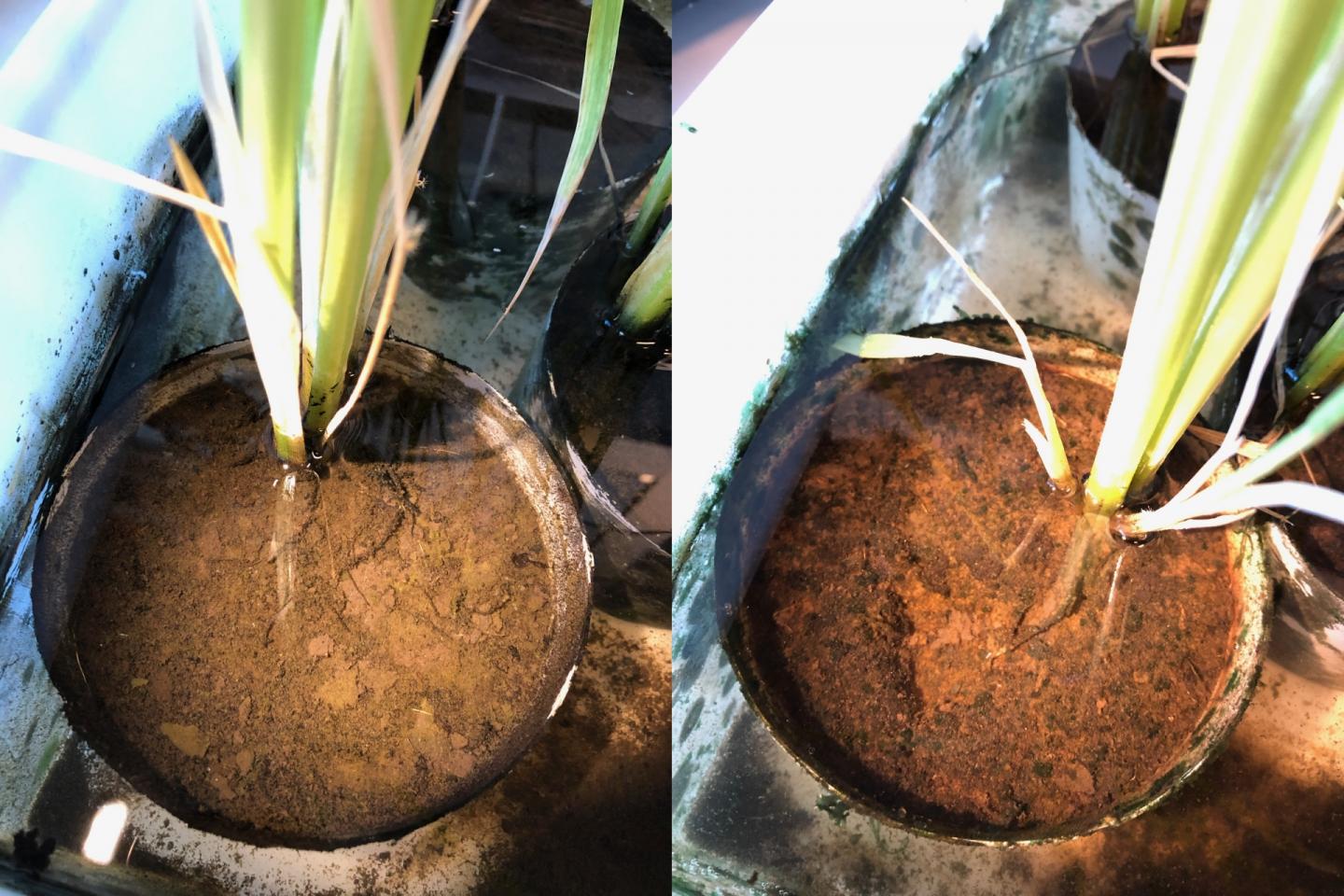 Rice plants in soil without cable bacteria (left) and with cable bacteria (right). The activity of cable bacteria can be clearly seen by the formation of an orange rust crust on the surface of the soil in the rice pot. The bacteria dissolve black iron sulphide in the soil and convert the sulphide into sulphate while the iron wanders to the surface and forms rust when it comes into contact with oxygen.
Vincent Valentin Scholz, AU

A Danish-German research collaboration may have found a solution to the large climate impact from the world's rice production: By adding electric conductive cable bacteria to soil with rice plants, they found they could reduce methane emissions by more than 90 percent.

Half of world´s population is nourished by rice crops, but rice cultivation is harsh to the climate. The rice fields account for five percent of global emissions of the greenhouse gas methane, which is 25 times stronger than CO2.

This is because the rice plants grow in water. When the fields are flooded, the soil becomes poor in oxygen, creating the right conditions for microorganisms to produce methane. Now researchers from Aarhus University and the University of Duisburg-Essen have found that cable bacteria could be an important part of the solution. In the laboratory, they have grown rice in soil with and without cable bacteria and measured what happened.

"And the difference was far beyond my expectations. The pots with cable bacteria emitted 93 percent less methane than the pots without cable bacteria, " says Vincent Valentin Scholz, who conducted the experiments as a PhD student at the Center for Electromicrobiology (CEM) at Aarhus University.

The results were published Apr. 20 in the scientific journal Nature Communications. 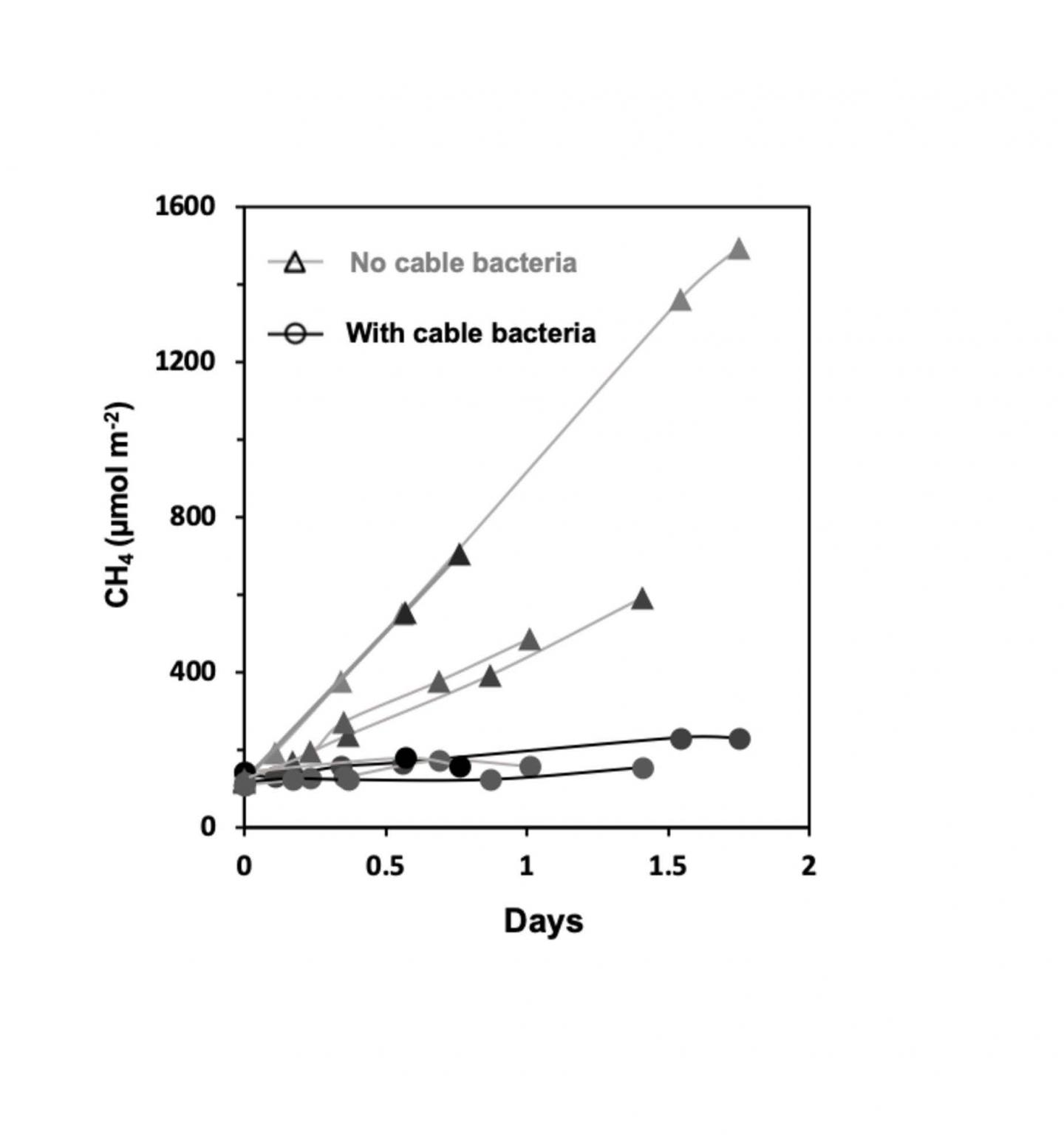 The emitted amount of CH4 from replicate rice pots with cable bacteria (circles) and without cable bacteria (triangles) normalized to the surface area of the pots as a function of time.
© Vincent Valentin Scholz / Nature Communcations

What are cable bacteria?

Cable bacteria were an unknown form of life until they were first identified in the Bay of Aarhus, Denmark, in 2012. They thrive on the bottom of the sea, lakes, groundwater, and streams—often in large quantities. Each individual consists of thousands of cells in a centimeter-long chain surrounded by a common outer sheath with electric wires. One end is buried in the oxygen-poor sediment, the other is so close to the water that it has contact with oxygen. This allows the bacteria to use electric power to burn the food in an oxygen-free environment. The process also changes the chemical composition of the soil.

"Cable bacteria transport electrons over centimeter distances along their filaments, changing the geochemical conditions of the water-saturated soil. The cable bacteria recycle the soil's sulfur compounds, thus maintaining a large amount of sulfate in the soil. This has the consequence that the methane-producing microbes cannot maintain their activity," explains Scholz.

It is already known that the rice growers can temporarily slow down the emission of methane by spreading sulfate on their rice fields. Apparently, the cable bacteria can do this for them—and not just temporarily.

This finding adds a new angle to the role of cable bacteria as ecosystem engineers. While the authors emphasize that they have only the very first laboratory observation, it is tempting to speculate that enrichment of cable bacteria by sensible management of water and soil regimes could become a sustainable and convenient solution for reducing methane emissions from rice fields. But of course, it requires field studies to see how cable bacteria can thrive in rice fields.

- This press release was originally published on the Aarhus website