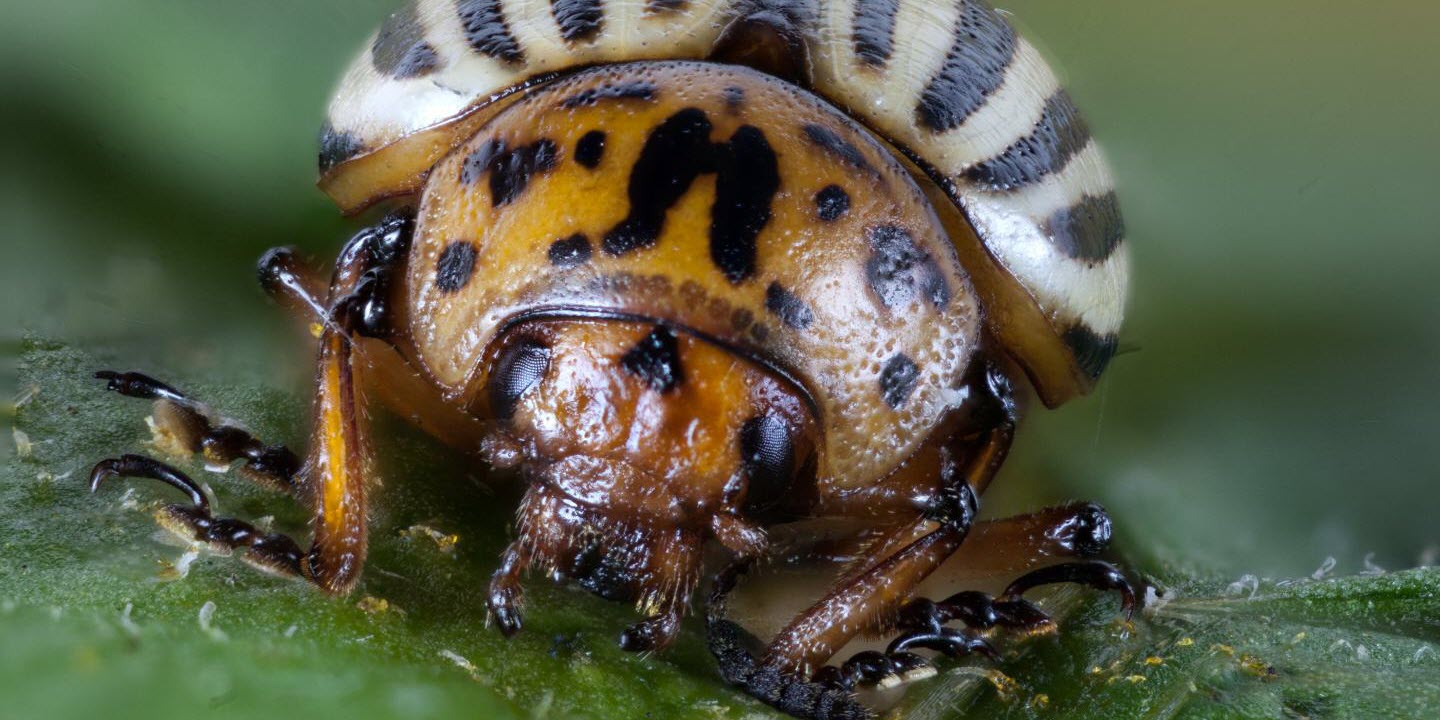 Native to the Rocky Mountains, the Colorado potato beetle has now spread to many parts of the world, chowing potato leaves, costing farmers millions—and quickly overcoming most every pesticide thrown in its way. A new UVM study sheds light on how these insects become resistant so fast.
Lily Shapiro

The Colorado potato beetle is a notorious pest—and a kind of unstoppable genius.

The modern pesticide era began in the 1860s when Midwest farmers started killing these beetles by spraying them with a paint color called Paris Green that contained copper arsenate. The beetles soon overcame that poison as well as lead arsenate, mercury DDT, and dieldrin—and over 50 other pesticides. At first, with any new chemical, many beetles are killed—but none of them last for long. The beetles develop resistance, usually within a few years, and continue merrily chomping their way through vast acres of potatoes in farms and gardens around the world.

Scientists have a poor understanding of how this creature turns this trick. Current evolutionary theory, focused on DNA, falls short of explaining the rapid development of pesticide resistance. While the beetle shows a lot of genetic variation, new DNA mutations probably do not show up frequently enough to let them evolve resistance to so many types of pesticides, so fast—over and over.

But now a first-of-its-kind study moves dramatically closer to an explanation.

A team of researchers, led by professor Yolanda Chen at the University of Vermont (UVM), shows that even small doses of the neonicotinoid pesticide, imidacloprid, can alter how the beetle manages its DNA. To fend off the pesticides, the new research suggests, the beetle may not need to change its underlying genetic code. Instead, the team found that beetles respond by altering the regulation of their DNA, turning certain genes on or off in a process called "DNA methylation." These so-called epigenetic changes allow beetles to quickly ramp up biological defense mechanisms—perhaps putting into overdrive already-existing genes that allow the beetle to tolerate a broad range of toxins found in potato plants.

A flush of enzymes or faster rate of excretion may let the insect stymie each new pesticide with the same ancient biochemical tools that it uses to overcome natural plant defenses—rather than relying on the ponderous evolutionary process of random mutations appearing in key genes, that would slowly cause a pesticide to become less effective.

Most important, the new study shows that these changes—triggered by even small doses of the pesticide—can be passed on to descendants across at least two generations. "We found the same DNA methylation patterns in the grandkid generation. That was surprising because they were not exposed to the insecticide," says Chen.

In several other insect species, exposure to pesticides has been shown to change DNA methylation. And some epigenetic changes have been observed to be passed on to future generations of species that reproduce asexually—such as the tiny crustacean Daphnia magna. "But it's long been assumed that epigenetics resets during sexual reproduction," says Kristian Brevik, the lead author on the new study who completed his doctoral degree working in Chen's lab. "That those changes could be transmitted, through multiple rounds of sexual reproduction, to future generations of insects—that's new."

The study was published in the December edition of the journal Evolutionary Applications.

Over the last half-century, agricultural researchers and chemical companies have spent millions developing innovative chemical compounds to try to kill off this beetle that causes hundreds of millions of dollars of damage—and almost all eventually fail. "Perhaps it's time to get off the pesticide treadmill of trying to introduce ever-more-toxic chemicals—and recognize that evolution happens, regardless of what we throw at them," says Chen. "We could be more strategic in understanding how evolutionary processes work—and invest in more ecological approaches that would enable agriculture to be more sustainable."

Epigenetics is an increasingly hot field. Basically, it's the study of how environmental stresses—from starvation to air pollution to pesticides—can add or remove chemical tags to an organism's DNA—flipping a genetic switch that changes its health and behavior.

DNA methylation was first shown to occur in human cancer in 1983 and since the early 2000s the epigenetics revolution in biology began to reveal how environmental change can turn certain genes on or off, leading to profound changes in an organism without changing its DNA. And it's well known that many insects in agricultural areas develop pesticide resistance; it's not just Colorado potato beetles. More than six hundred species have developed resistance to over three hundred pesticides, with tens of thousands of reports from around the world. A growing body of research shows that many of these involve epigenetic mechanisms.

In their experiment, the UVM scientists, with a colleague from the University of Wisconsin, gathered adult beetles from organic farms in Vermont. They divided up the offspring, treating them with different doses of the pesticide imidacloprid—some high, some low, some to a less-toxic chemical similar to imidacloprid—and some to just water. After two generations, beetles whose grandparents had been treated to any level of pesticide showed decreased overall methylation—while the ones exposed to water did not. Many of the sites where where the scientists found changes in methylation are with genes associated with pesticide resistance. The parallel response across all the pesticide treatments suggests that "mere exposure to insecticides can have lasting effects on the epigenetics of beetles," says Chen.

It's one thing to suggest that stress changes a particular organism, quite another to suggest that physical characteristics it acquires by stress or behavior can get passed down for numerous generations. A blacksmith who grows strong from a lifetime of hard work should not expect her children to be extraordinarily strong too. So why does some stress lead to lasting change?

The foundations of epigenetics remain mired in controversy, partly because it has been attached to largely discredited theories of "inheritance of acquired characters"—an ancient idea that stretches back to Aristotle and is most strongly associated with Jean-Baptiste Lamarck, the nineteenth-century French naturalist who proposed that organisms pass down characteristics that are used or disused to their offspring.

Although Lamarck's ideas were previously discredited by evolutionary biologists, the epigenetics revolution is making clear that evolution by natural selection doesn't have to just rely on random advantageous mutations showing up in the genetic code. In the case of the Colorado potato beetles studied at UVM, the research suggests that pesticides may flip a whole raft of epigenetic switches some of which can ramp up production of existing defenses against the toxins—while changes in DNA methylation can unleash portions of the DNA called transposable elements. "These elements have also been called 'jumping genes' and are most closely related to viruses," says Chen, a professor in UVM's Department of Plant and Soil Science and fellow in the Gund Institute for Environment. "Due to their harmful effect on host genomes, they are usually suppressed by DNA methylation." But pesticide exposure, the new research suggests, may let them loose, allowing more mutations associated with pesticide resistance to generate.

In short, the dynamic interplay between epigenetics and genetics points toward an explanation for the largely unexplained reality of rapid evolution and pesticide resistance. How these changes get passed on through multiple generations of sexual recombination remains mysterious—but the new study strongly suggests that they do. "We have more to learn," says Chen, "about how people could manage evolution better."

- This press release was originally published on UVM Today. It has been edited for style