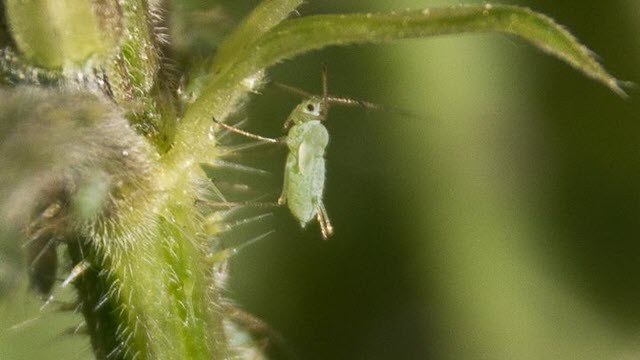 There's a reason parents tell their kids to lay off the sugar: too much isn't good for you.

But small sap-sucking insects called aphids can survive quite nicely on a largely sugar-based diet, despite their inability to make important nutrients from scratch. The key to their success is symbiotic bacteria, which live inside aphid cells and make amino acids, the building blocks of proteins needed for growth.

In research published in G3: Genes, Genomes, Genetics, researchers at the University of California, Riverside, show that bacteriocytes -- specific aphid cells that house the symbiotic bacteria—have different DNA methylation patterns depending on what type of plant sap the aphid is consuming.

DNA methylation is a way of regulating gene expression that doesn't involve changes to the DNA sequence itself, meaning genes can be turned "on" or "off" depending on environmental factors. The study is the first to show that DNA methylation patterns in symbiotic insect cells are related to host plant diet.

Allison Hansen, an assistant professor of entomology at UCR, said the differences in DNA methylation and resulting changes in gene expression point to shared metabolic pathways between the aphid and its symbiotic bacteria. By changing gene expression, the aphid can make sure the bacteria have the ingredients they need to produce essential nutrients from a sugar-rich diet.

"This study provides interesting insight into the close relationship that aphids have developed with their symbiotic bacteria as they have co-evolved together for approximately 150-200 million years," Hansen said. "DNA methylation of bacteriocytes likely enables the aphids to work together with their resident bacteria to survive, especially when they switch to a plant sap that is not rich in nutrients."

Hansen and Dohyup Kim, a doctoral student in UCR's entomology department and lead author on the paper, analyzed one of the largest DNA methylation datasets for insects that rely on nutritional symbionts. The pair used a model insect-microbe system comprising pea aphids and the bacterium Buchnera.

The researchers found that key aphid genes involved in nutritional symbiosis were activated in bacteriocytes—the aphid cells housing the bacteria—in low-nutrient diets. One of these genes is for a protein that recycles ammonia into glutamine, an essential ingredient needed by the bacteria in sustaining aphids on a nitrogen-limited diet. Another gene codes for a protein that transports glutamine into bacteriocytes, where it can be used by the bacteria.

"In long-term, co-evolved animal-microbe relationships, many microbes form shared metabolic pathways with their animal hosts, but how these processes are reciprocally regulated has remained a mystery," Hansen said. "Our research points to epigenetic gene regulation through DNA methylation as one way to induce this regulatory response. However, more work is needed to fully understand our observations."