Despite perceptions that too many Americans are ignorant when it comes to the realm of science, a new study reports that people in the United States actually “perform comparably to adults in other economically developed countries on most current measures of science knowledge.”

Nonetheless, when it comes to altering the public’s mindset about complex topics such as climate change, the report from the National Academies of Sciences, Engineering, and Medicine says that attitudes may be difficult to change because they are shaped by factors such as values and beliefs—rather than knowledge of the science alone. 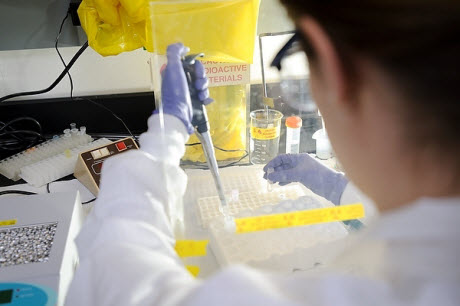 A new study shows that Americans perform well on most measures of science knowledge.Photo courtesy of the University of Wisconsin-MadisonThe committee that produced the study—“Science Literacy: Concepts, Contexts, and Consequences”—includes UW–Madison Life Sciences Communication professor Dominique Brossard and School of Education professor Noah Weeth Feinstein. This 12-member panel was chaired by Catherine Snow of the Harvard Graduate School of Education and included educators, scientists, physicians, and social scientists. Collectively, they took a hard look at the existing data on the state of U.S. science literacy, the questions asked, and the methods used to measure what Americans know and don’t know about science and how that knowledge has changed over time.

“People have been writing about science literacy for almost 60 years,” says Weeth Feinstein, a faculty member with the School of Education’s Department of Curriculum and Instruction. “This report is a welcome attempt to take stock of where we are and what we know.”

Members of the scientific community, among others, have long expressed concerns that the American public is ill-equipped to come to terms with complex issues ranging from energy and environmental topics, to evolution and genetic engineering. While that may not be the case, the committee that wrote the report explains that simply bolstering science literacy won’t lead to significantly greater support for science and its conclusions, because science knowledge is only one component of science literacy. Other factors, the report notes, include understanding of scientific practices, such as forming and testing hypotheses, and understanding science as a social process, such as the role of peer review.

“Science literacy is an important goal for 21st century society,” says Brossard. “But as the report stresses, it is not the only determinant of support for science and technology. Processes determining attitudes are complex.”

“This report challenges widespread assumptions about science literacy,” says Weeth Feinstein, who also is affiliated with UW–Madison’s Department of Community and Environmental Sociology. “It starts by pointing out that science literacy is more than just ‘knowing some science facts,’ and then goes on to ask hard questions about what science literacy can really do for us. We’re used to people making huge claims about the benefits of science literacy—are those claims really logical or supported by evidence?”

Adds Weeth Feinstein: “This report expands the discussion about science literacy to include communities and even our whole society. We’re used to thinking about individual people as being science literate, or not. What does it look like for a community to be science literate? How would we know if our society achieved a beneficial level of science literacy?”

The report, for example, highlights how communities can demonstrate science literacy by leveraging individuals’ diverse knowledge and skills to achieve specific goals.  For example, it’s noted that AIDS activists in the late 1980s to early 1990s developed scientific knowledge to demand modifications to drug-testing procedures and drug-approval policies, and worked together to successfully advocate for expediting the delivery of drugs to consumers in health emergencies.

Likewise, the report adds that communities can meaningfully contribute to science knowledge through engagement in community action, often in collaboration with scientists.  For instance, activists in a community may work together to detect and address links between environmental hazards and cancers.

The committee in its report notes that it found limited evidence indicating people across the globe have positive attitudes toward science and support public funding for scientific research. These attitudes have generally remained stable over time.

In addition, the report says that there is an overall high level of trust in scientists and in scientific institutions.

However, people with limited economic resources and limited access to high-quality education, the committee reports, have fewer opportunities to develop science literacy and health literacy. The report says this lack of access disproportionately affects some demographic groups, including Latinos and others who speak English as a second language, African-Americans, and children growing up in low-income families.

“This report raises important questions about equity,” says Weeth Feinstein. “Not everyone has equal opportunity to develop and use science literacy, and the committee agreed that it was crucial to understand and address how science literacy affects and is affected by the social conditions that perpetuate injustice and inequality.”

In an effort to gain additional insights into these issues, the report presents a research agenda with questions about creating new measures of science literacy and expanding the information available to clarify:

“The National Academies did a great job of bringing together people with different backgrounds and perspectives, and we worked hard to find common ground,” says Weeth Feinstein. “The atmosphere of open inquiry was thrilling. I particularly appreciated the committee’s willingness to challenge some longstanding assumptions about science literacy.”

(Information for this news story was taken from this National Academies of Sciences, Engineering and Medicine news release (http://www8.nationalacademies.org/onpinews/newsitem.aspx?RecordID=23595) promoting the report, “Science Literacy: Concepts, Contexts, and Consequences.”)