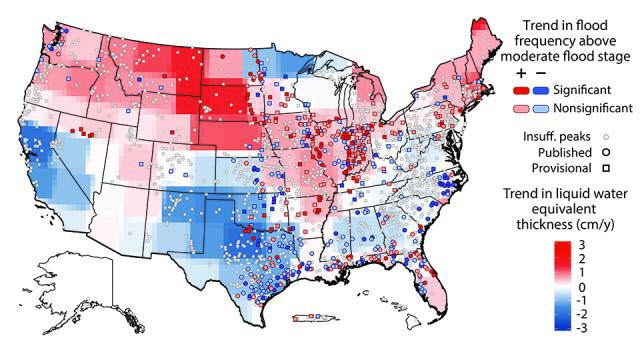 A University of Iowa study has found that the risk of flooding is changing in the United States, and the changes vary regionally. The threat of moderate flooding is generally increasing in the northern U.S. (red areas) and decreasing in the southern U.S. (blue areas), while some regions remain mostly unchanged (gray areas). The findings come from comparing river heights at 2,042 locations with NASA satellite information showing the amount of water stored in the ground. The study was published in the journal “Geophysical Research Letters.”Image courtesy of the American Geophysical Union

The risk of flooding in the United States is changing regionally, and the reasons could be shifting rainfall patterns and the amount of water in the ground.

In a new study, University of Iowa engineers determined that, in general, the threat of flooding is growing in the northern half of the U.S. and declining in the southern half. The American Southwest and West, meanwhile, are experiencing decreasing flood risk.

UI engineers Gabriele Villarini and Louise Slater compiled water-height information between 1985 and 2015 from 2,042 stream gauges operated by the U.S. Geological Survey. They then compared the data to satellite information gathered over more than a dozen years by NASA’s Gravity Recovery and Climate Experiment (GRACE) mission showing “basin wetness,” or the amount of water stored in the ground.

What they found was the northern sections of the country, generally, have an increased amount of water stored in the ground, and thus are at greater risk for minor and moderate flooding, two flood categories used by the National Weather Service. Meanwhile, minor to moderate flood risk was decreasing in the southern portions of the U.S., where stored water has declined. (See the above map.)

Not surprisingly, the NASA data showed decreased stored water—and reduced flood risk—in the Southwest and western U.S., in large part due to the prolonged drought gripping those regions.

“It’s almost like a separation where generally flood risk is increasing in the upper half of the U.S. and decreasing in the lower half,” says Villarini, associate professor in civil and environmental engineering and an author on the paper, published in the journal Geophysical Research Letters. “It’s not a uniform pattern, and we want to understand why we see this difference.”

Some of the regional variation can be attributed to changes in rainfall; a study led by Villarini published last year showed the Midwest and Plains states have experienced more frequent heavy rains in the past half-century. More rainfall leads to more groundwater, a “higher water base line,” Villarini explains.

“The river basins have a memory,” adds Slater, a post-doctoral researcher and the paper’s corresponding author. “So, if a river basin is getting wetter, in the Midwest for example, your flood risk is also probably increasing because there’s more water in the system.”

Why some sections of the nation are getting more, or less, rainfall is not entirely clear. The researchers say some causes could be the rains are being redistributed as regional climate changes.

The researchers hope that their findings could revise how changing flood patterns are communicated. In the past, flood risk trends have typically been discussed using stream flow, or the amount of water flowing per unit time. The UI study views flood risk through the lens of how it may affect people and property and aligns the results with National Weather Service terminology understood by the general public.

“The concept is simple,” says Villarini, whose primary appointment is in IIHR–Hydroscience, a branch of the College of Engineering. “We’re measuring what people really care about.”

The National Science Foundation, through a CAREER grant to Villarini, the U.S. Army Corps of Engineers Institute for Water Resources, the Iowa Flood Center, and IIHR–Hydroscience and Engineering supported the research.