A research team led by scientists at the RIKEN Nishina Center for Accelerator-Based Science (RNC) has successfully created larger-than-usual strains of zooplankton—which are used in fish nurseries—by creating mutations with a heavy ion beam. The new strains of zooplankton could contribute to improving the survival rate and optimize the growth of juvenile fish in aquaculture.

Economically important fish species, such as bluefin tuna, yellowtail, flatfish and groupers, are fed live bait until they are large enough to be fed with artificial foods. Rotifers, a type of animal plankton, are commonly used as the initial live food. However, fish need progressively larger bait as they grow, but rotifers are generally small and often not large enough to satisfy the growing fish, leading to cannibalism or growth abnormalities and eventually lowering the survival rate. "We decided to try to do something to improve the survival rate of fish larvae, as this would help to increase aquaculture productivity. We thought that if we could create a large rotifer strain using our expertise, it would contribute to stabilizing the income for aquafarmers," says Tomoko Abe from RIKEN RNC, who led the study, published in Bioscience, Biotechnology, and Biochemistry.

In collaboration with the Japan Fisheries Research and Education Agency and Nagasaki University, the research team began experimenting using a technique known as heavy ion beam irradiation in an attempt to create larger rotifers. Heavy ion breeding is a technique where cells are exposed to a beam of heavy atomic nuclei, creating mutations much more effectively than natural processes such as UV light. By adjusting the type of ion and dose, the beam is used to induce random mutations in the genome, and strains with desirable phenotypes can be selected. The team has already succeeded in developing highly effective mutant lines of oil-producing microalgae, high-yielding rice, and a commercialized sake yeast, using similar techniques. 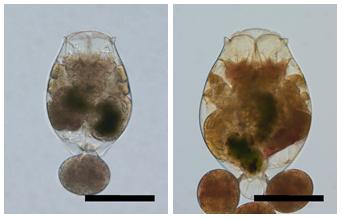 RIKEN team succeeded in creating a larger mutant of rotifer by using heavy ion breeding technique. The new strains of this zooplankton contributes to improving the survival rate and the growth of juvenile fish in aquaculture.
RIKEN

Using the RIKEN RI Beam Factory (RIBF) the team irradiated proliferating rotifers with beams of argon and carbon ions. They then selected larger individuals and cultured the plankton for several generations to create a large mutant line. The bred rotifers were approximately 1.2 times larger than other strains, which the group judged would be an ideal size for growing juvenile fish. They also found that some of the strains were not only larger, but also grew more quickly than the parent strains. "In general, larger mutants grow more slowly than normal rotifers, but we were lucky to discover a line that grows not only larger but faster as well," Abe recalls. "However, picking a large mutant among live rotifers that are moving quickly around under a microscope was far more difficult than we had anticipated and actually was the hardest part of this study."

Food shortages due to population growth and increased consumption are a major global concern, and countries around the world are looking for ways to increase food production. Resources from the ocean, which occupies 70 percent of the Earth's surface area, can be an effective and promising solution to the problem. For Japan in particular, as an island nation with a large exclusive economic zone, increasing the production of marine resources is an attractive goal. The enlarged rotifers obtained in this study could potentially provide a stable supply of larger rotifers at low cost, enhancing aquaculture. Moving forward, the group now plans to use the larger rotifers in field tests to see if they can demonstrate improved survival.

- This press release was originally published on the RIKEN website. It has been edited for style